An across-the-aisle discussion about American politics 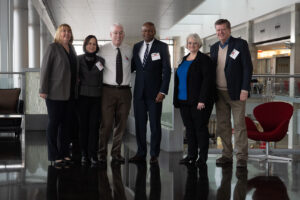 Every other November, the L. Keith Bulen Symposium on American Politics brings together politicians, political staffers, journalists, and scholars to discuss the latest election and look to the next one.

The one-day event cuts through the sound bites to talk about politics in a more meaningful way. Each symposium includes a media panel, presentations, and a discussion with the Indiana party chairs.

IUPUI’s Department of Political Science hosts the symposium, which is free and open to the public.

A who’s who of Indiana politics

L. Keith Bulen was a prominent political figure in Indiana. He worked in government for nearly half a century, and was elected or appointed at the block, precinct, ward, county, district, state, national, and international levels.

Bulen cultivated the initial successes of Richard Lugar and helped shape the careers of many other leaders and officials. He helped develop metropolitan government in Indianapolis (Unigov), and was involved in the management of campaigns for U.S. Congress, governor, and president. President Reagan appointed him a commissioner of the International Joint Commission, which prevents and resolves disputes between the United States and Canada over boundary waters.

Republicans and Democrats came together to establish this symposium in honor of Bulen’s life.

Open-minded political discussion is more important than ever. Help us facilitate these conversations.

Make an online gift  Learn how to mail your gift