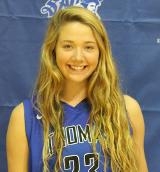 INDIANAPOLIS – The box score will forever read “0+” minutes, but Milan native Shelby Rupp finally played in a championship game and won a title in Indiana.

Rupp entered the game for the final 22 seconds of Thomas More’s second consecutive Division III national championship victory when the starters left to a standing ovation. The Saints (37-0) closed the game on a 14-2 run, and four starters scored in double figures as they beat the Tufts Jumbos, 63-51, on Monday at Bankers Life Fieldhouse.

Rupp didn’t record any stats in her 22 seconds, but it was quite the experience for the Indiana native who grew up a Pacers fan but had never been to a game at Bankers Life Fieldhouse. Her dad, stepmom, sister and a handful of cousins, aunts, uncles, and grandparents were in attendance Monday.

“It’s just crazy,” Rupp said. “Coach was telling us before we went out there to stay focused and not try to look up into the crowd. It was kind of exciting but also never-racking with just that huge atmosphere.”

Rupp started playing basketball in eighth grade and didn’t play again until her sophomore year at Batesville High School; the team never made it past sectionals. Soccer was her main sport, but she didn’t get a soccer scholarship and had only one basketball scholarship offer from IU Southeast, an NAIA school. So, she chose to attend Thomas More, located 45 minutes southeast of Milan.

“They had just won a national championship. And when I came to visit I met all the girls, and I just loved all the girls; they were super nice. And I liked how it was a small campus and small class sizes,” said Rupp, who’s majoring in elementary education and would like to teach first grade.

The 6-foot-2 freshman had been a regular off the bench for the Saints. She finished the season with an average of 3.2 points and 2.3 rebounds in 5.5 minutes per game in 26 appearances. That’s 23.3 points and 16.7 rebounds per game over a 40-minute stretch.

However, she wasn’t able to make her way onto the court until the final minute as the Saints had to fend off a late surge by Tufts. The Jumbos used an 11-2 run bridging the third and fourth quarters to tie the game 49-all with 6:28 to play.

“I think we all just had that look in our eyes. Okay. It’s time to buckle down and get stops on defense and make plays on offense for each other, and obviously we did that,” said Thomas More senior Sydney Moss, who finished with 14 points and 9 rebounds and was named the Most Outstanding Player of the tournament.

With the score knotted 49-all, Moss stole the ball and converted a layup off the fast break with 5:58 left. It was the first of four turnovers Thomas More forced in the final 6:02.

On the next possession, Saints senior Alexa Santamaria converted a layup after grabbing an offensive rebound. Freshman Madison Temple, who scored 10 points, added a 3-pointer to push the lead to 7 with 4:19 to play.

Thomas More held Tufts scoreless for 4:44 and led by 10 by the time senior Michelle Wu hit a jumper with 1:44 to play. It was Tufts’ only basket in the final six minutes.

When Rupp entered the court, the starters left to a standing ovation with the victory locked up. Thomas More entered the game averaging 92.2 points per game, but with Tufts holding teams to 44.8 points per game, head coach Jeff Hans said Sunday if his team could get to 60 points he thought they had a shot to win. They finished with 63. Equally important, Tufts only scored 51.

Junior Michela North posted 15 points and 10 rebounds to lead the Tufts in both categories.

“I don’t think they [the Saints] get enough credit for their defense because everybody talks about the 90 points,” Tufts coach Carla Berube said. “… And, yeah, I knew we needed to score more than 50 points to win, and it just didn’t happen. I actually thought that we could have defended a lot better, too. … But like I said, they made the plays when they needed to.”