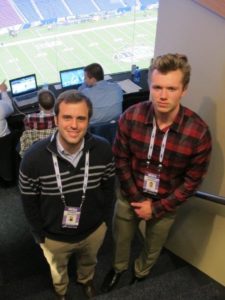 IUPUI students Jack Carney and Aidan Wilkins in the Lucas Oil Stadium Press Box prior to the 2016 Big Ten Championship.

INDIANAPOLIS – Two students from the Sports Capital Journalism Program at Indiana University-Purdue University Indianapolis will cover the Big Ten Football Championship Game, an opportunity that began with the inaugural game five years ago.

Jack Carney and Aidan Wilkins will cover the game for the program’s website.

Carney, a graduate student, will soon complete work towards a master’s degree in Sports Journalism. As an undergraduate at Purdue University, he covered men’s and women’s basketball for The Purdue Exponent, the student newspaper. In March, Jack covered the 2016 Midwest Regional of the NCAA Division I Men’s Basketball Championship in Chicago for the Sports Capital Journalism Program. Carney has also served as a public relations intern for the Indianapolis Colts and covered high school sports as a freelance reporter for the Noblesville Times.

Wilkins, a sophomore at IUPUI, is majoring in Journalism with minors in Political Science and History. At IUPUI, he is also involved in the Campus Ambassador Program, is an Adam W. Herbert Presidential Scholar through the IUPUI Honors College, and is President of the Phi Kappa Psi Indiana-Theta fraternity. He has been recognized as an award-winning sports radio host for his work on the ‘Friday Morning Sports Show’ on 91.5 WRFT.

In the past year, more than 20 students from the Sports Capital Journalism Program have covered events including the College Football Playoff, the NCAA men’s and women’s Final Four tournaments, the 100th running of the Indianapolis 500 and the Olympic Games at Rio de Janeiro.