Ryan Kelly: The ‘heart and soul’ of the Alabama Crimson Tide 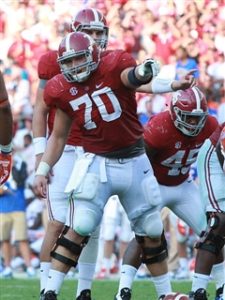 Editor’s note: The following story first appeared on the Sports Capital Journalism Website on Jan. 10, 2016. In light of the Indianapolis Colts selecting Ryan Kelly with their 2016 first-round pick, the story has been reposted.

PHOENIX — Alabama running back Derrick Henry has won four major college football awards this season, including the Heisman trophy. His total of 2,061 rushing yards surpassed the single-season Southeastern Conference record held by Georgia’s Herschel Walker. It would seem a safe assumption that Derrick Henry is the heart of the Crimson Tide.

But all you have to do is ask Henry, and he will give you the answer that most on the Alabama team believe to be true.

“Ryan Kelly is the heart and soul of the team,” Henry said of the 6-foot, 5-inch, 297-pound senior, the winner of the Rimington Trophy as the leading center in the nation.

“He’s a great leader of this team,” Henry said, “and he is always making sure everyone is in the correct positions out there on the field. He’s helped us be successful this season.”

Kelly’s team-first attitude is exactly what those around him love about his personality. He’s always looking to lead and doesn’t allow his status within the Alabama program to stop him from working harder than anyone on the team.

“He brings a lot of energy to the practice field every day,” said freshman offensive lineman Ross Pierschbacher, “and just keeps everyone up tempo on and off the field. He knows when it’s time to get to business and lets everyone know.”

With three starters from last season’s starting offensive line lost to the National Football League draft, the onus of providing stability for a younger offensive line was placed squarely upon Kelly’s broad shoulders.

Struggling to handle the pressure brought about by the Tennessee Volunteers defensive front seven during their Oct. 24 meeting, Alabama gave up a total of five sacks. Kelly recalled the offensive line’s impressive response during the next game, at home against Louisiana State on Nov. 7, as evidence that the unit had come together.

With Alabama leading by 10 points, the Crimson Tide manufactured an 11-play, 73-yard drive leading to Henry’s 7-yard touchdown for a 27-10 lead with 2:47 to go in the third quarter. “We were able to solidify the game right there,” Kelly said.

Another player that remembered the LSU game was senior right tackle Dominick Jackson, who reminiscence about the doubts he experienced after suffering an ankle injury. It was Kelly that helped calm his nerves.

“He could tell that I was really nervous,” Jackson said. “He walked right up to me in the tunnel before the game and was just being a big brother to me. He said as long as you give me your 110 percent, I don’t care what happens during the course of the game, because you’ll always be my bro.

“That’s when I realized that Kelly wasn’t just a competitor,” Jackson went on. “He doesn’t care about the outside trash talk or some of the other nonsense that goes on during the game. He’s all about winning together and doing things the right way. Ryan is without a doubt the leader of our offense and this team.”

Kelly possesses the attributes coach Nick Saban looks for from his center: He’s smart, versatile, and wildly productive. Kelly’s academic achievement extends the success of his predecessor at the position, Barrett Jones, who won the Campbell Trophy in 2012 as the nation’s leading football scholar-athlete. Kelly completed his Master’s degree in Marketing while occupying the role as the centerpiece of the Alabama offensive line.

Starting every game for the Crimson Tide this season, Kelly has not surrendered a single sack over the course of the 948 snaps he has been on the field.

“He has the license to lead this team, because he brings it each and every week on the field,” said senior middle linebacker Reggie Ragland. “You can always trust he will do what it takes to win.”

To Kelly, even more satisfying than the Rimington Trophy ceremony was one that all the linemen attended. Alabama won the inaugural Joe Moore Award for Most Outstanding Offensive Line Unit.

“Getting the chance to be a part of winning the Joe Moore Award was even better, because that’s something we all did together,” Kelly said. 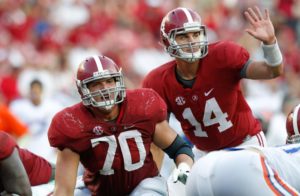 One of Kelly’s best friends on the team is senior quarterback Jake Coker. The two share a special bond as they were both named permanent captains at the team banquet in early December.

The two will take the field together one last time on Monday night with the rare opportunity to finish their college careers as champions.

“He’s unlike anyone I’ve ever been around,” Coker said of Kelly. “He’s got the discipline and the drive that goes unmatched. Getting to be a team captain with him has been an awesome experience….

“The fact that you can always count on him makes every word that comes out of his mouth important,” Coker said. “… When push comes to shove and we’re fighting for all of the marbles, I know that Kelly is going to be right there guiding us to the finish line.”