About Us Sports Journalism Blog 2016 Rio Olympics Postcard from Rio: An arrival, a request and the trip of a lifetime

Postcard from Rio: An arrival, a request and the trip of a lifetime

I was not prepared for the question. Not after the overnight flight, seeing the first light of a new day shortly after the view from the previous flight had featured a bright red sunset. Not after the walk through the airport terminal, the discovery of the first of many lines and the instruction to proceed to station No. 8 to go through customs. Not after handing my passport to the friendly man in the suit who reached into his jacket pocket and held up a pin.

At that moment, there was every reason to please the friendly man in the suit who held both my passport and the direction of my immediate future. But there was no way of doing it. “Sorry,” I said. “No pins. Checked luggage.” He stamped the passport and sent me through after the first surprise of this Olympic adventure.

I had arrived with Rebecca Harris and Frank Gogola, graduate students in the Department of Journalism and Public Relations at IUPUI who are representing the Sports Capital Journalism Program. They will cover the Olympic Games for TeamUSA.org and USA Daily, the digital newsletter of the United States Olympic Committee.

They will work with Jaylon Thompson and Nicole Chrzanowski, students from the Sports Media Certificate program at the University of Georgia’s Grady College of Journalism and Mass Communication. Their professor, Vicki Michaelis, the John Huland Carmical Chair in Sports Journalism and Society, reported on eight Olympic Games, six for USA Today.

“The coolest stage in sports,” Michael Phelps said on Wednesday afternoon, just before the start of his fifth Olympics, his first as a flag bearer at the Opening Ceremony.

For Phelps, and for the students, it is a life-altering experience. The challenges of covering the Olympic Games, with the requirements of mastering logistical challenges, generating ideas and overcoming the inevitable fatigue, can tax journalism veterans with decades of experience.

Rebecca, a member of the IUPUI class of 2016, is starting her work toward an M.A. in Sports Journalism. Frank is completing work toward his graduate degree. The lessons they have learned in the classroom – the importance of critical thinking, problem-solving skills, preparation and self-sufficiency – will be tested against the backdrop of two additional elements: The non-negotiable necessity of patience, and the type of exhaustion that makes you realize you can feel the back of your eyeballs.

The students have been advised that their adrenalin will propel them about halfway through the first week, and then they will have to grind their way to the Closing Ceremony on Aug. 21. That is the life-changing part, the hour-by-hour, day-by-day realization that they can do this. 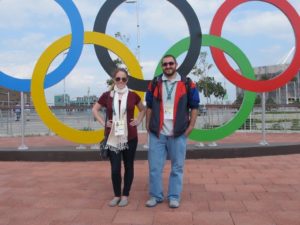 Rebecca Harris (left) and Frank Gogola in front of the Olympic Rings at the Barra Olympic Park in Rio de Janeiro.

Their first challenge was finding the rings. From the Main Press Center in Barra Olympic Park, Rebecca and Frank were told they should wind all the way behind the International Broadcast Centre, follow the fences past the tennis venue, and keep going until they become convinced that this can’t possibly be the right way. That’s how they’d know it was the right way.

The directions were perfect. There they were, Rebecca, Frank and the rings, not long before the Games would begin and the crowds would fill the park. As they stood and smiled, they may or may not have known how vivid the memories would become and how long they would endure.

For something will begin to happen as soon as the torch is extinguished on Aug. 21 and the crowd at the Closing Ceremony sighs in disappointment. The exhaustion goes away, the details of the challenges begin to fade, and the frustrations are left behind. And all their achievements, that remarkable blur, will be theirs to take with them forever.