For more than a decade, sports journalism students at IUPUI have covered some of the biggest and most challenging sporting events in the world.

Graduate and undergraduate students have covered the Olympic Games at Rio de Janeiro, Brazil in 2016, the World Baseball Classic at San Francisco in 2013, the FIBA Women’s Basketball World Cup at Tenerife, Spain in 2018 and the Pan American Games at Lima, Peru in 2019.

IUPUI students have covered every NCAA Final Four since 2012 and the College Football Playoff National Championship starting in 2015. They also cover the Indianapolis 500 on an annual basis.

As a student in the Sports Journalism program, you would receive the same credentials as professional reporters. Your travel expenses are paid for by the Sports Capital Journalism Program within the Department of Journalism and Public Relations in the School of Liberal Arts at IUPUI.

“The ability to navigate through all the pressures of a big event, including the challenges of overcoming language barriers and exhaustion, can become the difference when students apply for internships and jobs,” said Sports Capital Journalism Program director Malcolm Moran. “The deadline work is right there for editors and producers to see. The obstacles the students must overcome can be described in their job interviews. These are life-altering experiences that convince our students they can meet some of the most intense challenges of the industry.” 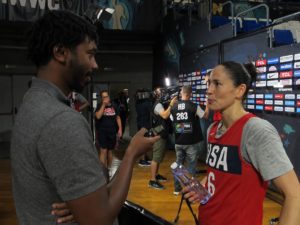