About Us Sports Journalism Blog 2016-17 College Football Playoff National Championship Postcards from Tampa: When football history is this close

Postcards from Tampa: When football history is this close 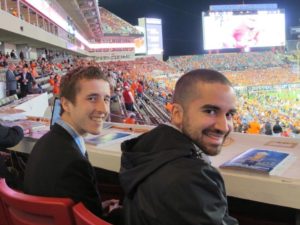 Before Clemson’s Deshaun Watson stuck one final imaginary arrow in his bow, the signature celebration in a remarkable college career that ended with the last-second victory over Alabama, I looked up at the scoreboard and then looked around at the record 74,512 fans in attendance at Raymond James Stadium in Tampa.

The “it” I’m referring to is not only covering a big game in the media trenches, but covering the game in college football this season, the College Football Playoff National Championship Presented by AT&T. The rematch between Alabama and Clemson was everything I had hoped it would be … and then some.

After leaving the auxiliary press box for a spot along the sideline in the final minutes, I watched Alabama quarterback Jalen Hurts scamper past me for a go-ahead 30-yard touchdown with 2:07 left to put Alabama in position for a fifth championship within a span of eight seasons. The confirmation of an Alabama dynasty was set to begin with another back-to-back title run.

Watson led the Tigers down the field on a beautiful nine-play, 68-yard drive, ending with the 2-yard touchdown pass to Hunter Renfrow, to hand Alabama its first loss in 98 games under Nick Saban with a double-digit lead in the fourth quarter, according to ESPN’s Stats & Info Department.

The teams combined to score 21 points in the final 4:38 of the game.

“Wow. Just … wow,” I heard myself say, reacting to the Clemson contingent in the stands and the Tigers along the sideline going out of their minds, realizing that a title was just one second away.

And then after all of that, Clemson coach Dabo Swinney called for an onside kick that the Tigers recovered. A year earlier, Alabama’s daring onside kick had helped the Tide take control. Clemson’s inventive last-second version this time completed a journey of redemption from last year’s heartbreaking finish to the school’s first national championship in 35 years. You can’t draw up a better script.

The final frantic minutes of the game became an experience that cannot be taught in a classroom. It’s one thing to talk about getting a good quote or a great photo in the heat of the moment. It’s another to find yourself five feet from Swinney after the biggest win of his life, with the swarm of at least 30 photographers and reporters looking for the perfect way to capture the moment.

Of course, that comes as a challenge when you don’t see Swinney coming towards you in the chaotic atmosphere of the post-game hoopla, and you discover that he and his police officers are about to barrel into you as they search for Alabama coach Nick Saban.

To be that close, to feel college football history in a way I have never experienced, is something I’ll remember for the rest of my life. As the final 4:38 took place in front of me, the experience almost didn’t feel real. But it was. The nervousness and worries that I had brought into Raymond James Stadium were gone in that final 4:38 of Monday night’s thriller.

IUPUI had prepared me for the moment. And I wanted to live in it forever.

Inside the Clemson locker room after the Tigers won the 2017 College Football Playoff National Championship Presented by AT&T, I was pressed against 300-pound naked men, trying to get quotes about the remarkable things they had just done on the field.

I used one of the lessons I had learned here to maneuver around the small rectangular locker room and get what I needed after Clemson’s last-second championship victory over Alabama.

I’ve learned that when everyone zigs, you should at least consider zagging.

I went over to defensive linemen Carlos Watkins and Dexter Lawrence. There were few reporters in that section of the room because everyone wanted to talk to the offensive players, so I finally got some needed space. I knew from Media Day that Watkins and Lawrence have a good relationship and would probably be feeding off each other.

I stuck my phone in there while someone else was asking questions and started listening to Watkins talk about how his defense came through against Alabama, a year after the defensive players felt they had lost the championship in Arizona. Then Lawrence, a lighthearted freshman who is not shy, turned to Watkins and pulled out the gloves he had been wearing.

“These are my championship gloves!”

Throughout so much of the game, such a breathtaking finish didn’t seem to be in the cards. Not that Alabama was overpowering the Tigers, but Clemson’s usually explosive offense just wasn’t getting much of anything done. Being on the Clemson beat, I honestly thought that I would be writing a story about how Clemson’s offense, not its defense, let it down in 2017 after the exact opposite happened in 2016.

But as the Tigers started finding their stride in the fourth quarter, I came to this realization that I might be in position to witness something that had only been done six times before: beating Nick Saban at Alabama after he took a lead into the locker room at halftime.

And that’s exactly what happened.

Better than just seeing it from the auxiliary press box in the opposite corner from where Hunter Renfrow caught the game-winner, I was on the field for the final few minutes. I did my best to jot down notes and take pictures and videos, but I was honestly shaking so much with excitement that it was hard to do.

Then it was over. I rushed the field—well, as much as one can “rush” with a suit jacket and a heavy backpack on—to take in as much of the scene as I could for my story.

As the confetti was popping me in the face (it’s hard to appreciate how much confetti there is on TV), I thought to myself, Oh boy, this is the big time.

People keep telling me that if I can cover a college football national championship, especially one like that, I can cover anything else. I don’t know if that’s true, but I do know that this title game required a high standard: I had to navigate a stadium I’d never been to, take detailed notes during the game, frantically scratch notes on the field, stake out players in the locker room, and then put it all together for a story at 3:30 in the morning.

So even if I can cover anything else after that, if I am faced with a moment as frantic and historic as what happened here late Monday night, I know I’ll be able to handle it.