About Us Sports Journalism Blog 2018 FIBA Women's Basketball World Cup Postcard from the World Cup: On Entering The Mixed Zone

Postcard from the World Cup: On Entering The Mixed Zone

At the end of my first day covering the USA Basketball Women’s National Team in the 2018 FIBA Women’s World Cup, I felt like I was just initiated into the fraternity of journalists.

This feeling didn’t come to me while I was sitting in the media room waiting for the games to start. It wasn’t while I was sitting behind a baseline in the Media Tribune – the press area — taking notes as the USA beat Senegal in its first group phase appearance, or even after I wrote the game story.

My rite of passage into this fictional media fraternity that I somehow created in my mind came in the form of navigating the Mixed Zone.

Life in the Mixed Zone is unlike anything I’ve experienced in my short journalism career. The postgame routine was discussed a couple of weeks before leaving for the Canary Islands, and again in more detail over dinner after we arrived in Santa Cruz de Tenerife. The Mixed Zone became more intriguing each time it was discussed. I couldn’t wait to get my first taste. FIBA also sent out its explanation of the Mixed Zone in its digital media guide.

The Mixed Zone allows all accredited media – regardless of their status as rights-holders or not, to approach players and coaching staff for interviews and reaction following the conclusion of each game.

Members of the media wishing to use the Mixed Zone should take their positions before the end of the game.

The coaches and players of both teams are required to exit the court via the Mixed Zone. While not officially obliged to stop, players and coaches have been strongly encouraged to take the time to answer questions in the Mixed Zone.

However, players and coaches are under no obligation to stop and give interviews. Accordingly, members of the media working in the Mixed Zone are requested not to insist too forcibly. Media are also asked to show appreciation to those players and coaches willing to take time to answer questions as they are doing so on a voluntary basis.

The entrance is in a narrow corridor near one of the team bench areas, next to the stands, where the players leave the court. A few feet away, young fans are waiting to take selfies with the players. A small sign has arrows that direct players to the left and media members to the right. The player side is separated from the media side by the type of strip that you’ll find in an airport gate area, the kind that separates first class from coach. 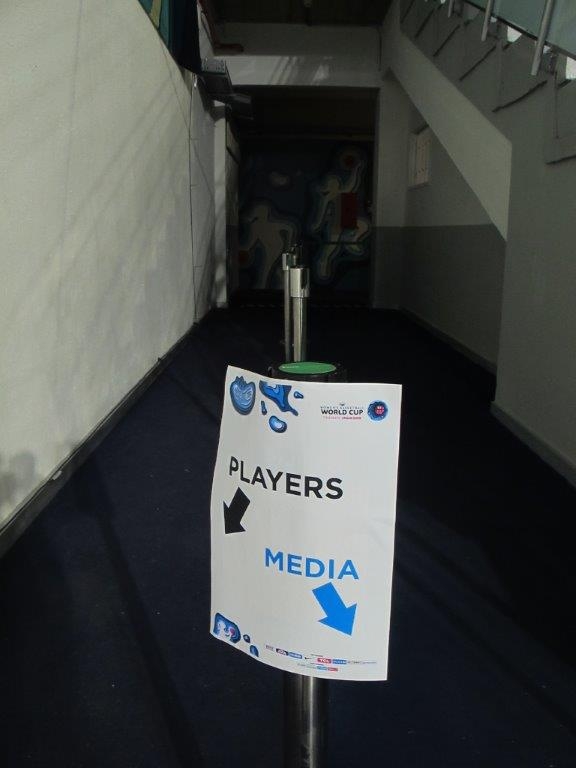 We stand on our side, waiting to catch the player or coach that we need, hoping they’ll stop to chat. I stand with my IUPUI colleague Ryan Gregory and Associated Press national women’s basketball writer Doug Feinberg, who I am sure has spent more time than I can imagine standing in Mixed Zones over the course of his career.

He was gracious enough to explain to us how the Mixed Zone works. The most important message: Success or failure is determined in an instant. If you miss somebody in the Mixed Zone, you’ve missed them. There might not be another opportunity to get what you need beyond that moment.

I soon found out exactly what that meant.

It happened after Latvia’s first-ever World Cup game, a 64-61 loss to China, No. 8 in the FIBA rankings. Two members of Latvia’s team are athletes at NCAA schools, and I needed to speak to both of them. Kitija Laksa, a senior at the University of South Florida, was the one I needed the most, because she took the shot that would have given Latvia a one-point lead with three seconds left — if it had dropped.

She was stopped by a television crew as soon as she entered the Mixed Zone, so I opted to talk with Syracuse University sophomore Digna Strautmane to get her thoughts about representing her country in a World Cup for the first time. Strautmane was helpful, but before I could end the conversation, Laksa finished her television interview and walked straight toward the locker room. I had missed her.

My hope was that Laksa might be present in the post-game press conference, but to my surprise there wasn’t one. Some games have press conference and some don’t, which means the Mixed Zone could be your only chance for quotes. I had learned my lesson.

Later that night, after the USA-Senegal game, I knew there would be a press conference, so I didn’t need to talk to USA coach Dawn Staley or Elena Delle Donne. I did want to speak with Nneka Ogwumike, who tied a 20-year-old World Cup record by shooting a perfect 6-of-6 from the field and 4-of-4 from the free throw line. I also wanted to talk to the WNBA rookie of the year, A’ja Wilson, who scored 15 points in her first World Cup game.

So I called upon my teammate for help. Ryan spoke to Wilson while I talked with Ogwumike. This time, I had everything I needed. There is not a perfect science to navigating the Mixed Zone, not with the emotions at the end of a game and all those moving parts, but I’m figuring it out as I go. My hope is to become a Mixed Zone pro by the time I leave the Canary Islands.