About Us Sports Journalism Blog 2016 Rio Olympics Postcard from Rio: A day and night to remember

Postcard from Rio: A day and night to remember

The digits all turned to zero, the new day had begun, and all I could think about was how memorable Friday had been.

I had witnessed one world record in more than three decades in daily sports journalism: That was the night Franklin Jacobs of Fairleigh Dickinson University set an indoor high-jump record of 7 feet, 7 ¼ inches during the 1978 Millrose Games. Those were the old Millrose Games, before a full house at Madison Square Garden, and it was very late, and a deadline clock was ticking loudly. The enormity of the moment and the sense of exhilaration are still there, all these years later.

For all the technological and economic changes that have revolutionized the communications industry, the essential element at the core of sports journalism is being there. On Friday, Frank Gogola and Rebecca Harris, students representing the Sports Capital Journalism Program at IUPUI, each witnessed a world record at the Olympic Games.

Frank sat in the first row of the press tribune in the upper deck of Olympic Stadium and watched Almaz Ayana of Ethiopia win the women’s 10,000-meter run with a time of 29 minutes, 17.45 seconds, 14.33 seconds faster than a record that had stood for nearly 23 years. The top four finishers were faster than the previous Olympic record of 29:54.66. Eight runners set national records, including Molly Huddle of the United States, whose time of 30:13.17 was 9.05 seconds faster than Shalane Flanagan’s U.S. record set in Beijing in 2008.

Rebecca was not required to be at the pool late Friday night. She had been working on a tennis assignment and managing frustrating technical complications. But a precious media ticket had become available, so there she was as Katie Ledecky of the United States did something that few elite-level swimmers had ever done. Ledecky made the finals of the 800-meter freestyle appear as if she was going the wrong way on a one-way street. At the end, her only competition was a clock that would define her place in Olympic history. Ledecky’s time of 8 minutes, 4.79 seconds broke her own world record.

The media credentials awarded to Frank and Rebecca, a rare distinction for any college student in Rio, presented responsibilities and challenges that have tested their patience, stamina and problem-solving skills in a way that a classroom never could. But those credentials have also given them great rewards, including the chance to witness unforgettable Olympic moments. From Frank’s 7 a.m. bus ride to Rebecca’s early-morning return to the hotel, here are their stories. 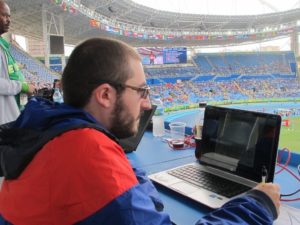 Molly Huddle was moving slower than ever. She tried to maneuver through the crowd of people but had to alter her path every few feet.

Huddle was not on the track but instead working her way through the mixed zone. It was quite the scene for a runner who didn’t medal and finished sixth in her race several minutes earlier.

But it appeared everybody was looking for an interview, American and international press alike. She did at least four separate interviews answering similar questions as I followed her around the mixed zone, listening in and adding my own questions.

I finally got her semi-alone to ask her about the recent death of her grandfather, who was a runner just like her, if she had thought about him before or during the race, and what her grandfather would have thought of her performance.

Huddle had just run the best race of her life. Not only did she lower her personal record in the women’s 10,000 meters by 34.42 seconds but she broke an 8-year-old American record by 9.05 seconds.

After I spoke with Huddle for the final time, she continued making her way through the mixed zone. I saw her stopped at least twice more for interviews before I left the room to finish writing my story on her historic performance.

She had seemed happy to answer the barrage of questions. When would she – or any runner – likely ever get more media attention than at the Olympics?

Back upstairs, the press box – or the press tribune, for the uninitiated – had been anything but quiet. First of all, it was outside in the middle of fans, who were trickling into Olympic Stadium for the opening day of track & field – or athletics – events.

They were also outwardly ecstatic for Almaz Ayana, and what she did deserved some cheering. But maybe it should have been more internal.

Ayana broke the world record in the 10,000 meters by an astounding 14.33 seconds. Not one point four seconds, but 14 whole seconds.

And it seemed like Ayana could keep going with how effortless her stride looked. It didn’t look like she was getting tired during the race. It was more like she was out for her daily morning run.

The morning had started for me with a 7 a.m. shuttle to the Media Transportation Mall that I caught in the pouring rain. The rain had subsided when I switched shuttles to head to Olympic Stadium, home to the Olympics’ first-ever blue track.

An on-and-off drizzle continued as Ayana, Huddle and six runners separated themselves from the other 29 competitors in the first several laps. They were creating their own group of leaders who would likely be the only ones capable of medaling.

They’d eventually lap slower runners, and keeping tabs on them then became quite the task. Huddle eventually worked her way around those she lapped and crossed the finish line sixth in a stacked field with an American record in hand.

Then came her next big challenge: navigating through the press.

For me, it was file my story, head downstairs to catch another bus, switch shuttles at the MTM and see weightlifter Jenny Arthur set an American record in the women’s 75 kg weight class with a lift of 107 kg in the snatch.

Some days you just don’t want to end. 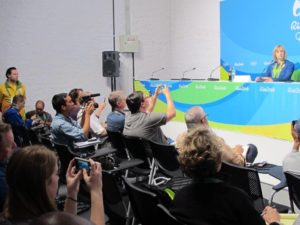 I had interviewed Venus Williams Friday evening at the Olympic Tennis Centre, so I thought I was doing pretty well. Then I rushed over to swimming and saw Michael Phelps swim in the last individual race of his career. So then I was doing really well. I could’ve gone to bed a happy person if I had left at that point.

But I’m so glad I didn’t. Because Katie Ledecky happened after that.

If I had been taking my time, the walk from tennis to swimming would have been 15 minutes. On Friday night, I made sure I got there in 10. I had to write a tennis story, and I didn’t want to miss Phelps.

I watched the first 100 meters of the women’s 800-meter freestyle race, when it was still kind of sort of close, and naively thought that while Ledecky wouldn’t lose, maybe it’d be closer than expected. After all, Ledecky had just set an Olympic record in the morning heat. There was no way she could keep that pace up for a second race.

My apologies to Ledecky for the doubts and my deepest sympathy to her competitors for having to share a pool with her.

Ledecky could have had a cup of coffee waiting for everyone else to touch the wall. She could have slowed her pace by half and still finished in front of everyone. From my seat, it appeared that she was barely breathing hard. She hung on to the wall, her nearest competitors half a pool length behind, while everyone else raced towards her for a chance at a silver medal.

It was like a game of Where’s Waldo, except it wasn’t hard at all. I would have a hard time distinguishing most swimmers in the pool if it weren’t for the lane markings. Not so with Ledecky. Find the majority of the swimmers and then look about 25 to 50 meters ahead. That’s where she is.

Phelps became a once-in-a-lifetime talent for men’s swimming. After two Olympic Games, Ledecky is making herself into that for women (though by some accounts, there are men who hated racing against her during training.) Most of the time, journalists in the press tribune here have waited until the end of a race to start taking pictures. Phones were out from the minute Ledecky entered the water, ready to document the ridiculous length between her and the next closest swimmer.

I like writing about sports because you get the full range of human experiences, emotions and backgrounds. Ledecky’s historic dominance makes her a pleasure to watch. But she is also a sweet 19-year-old, on her way to Stanford, who cried while smiling at the top of the podium Friday night despite the fact her victory wasn’t a surprise like Maya DiRado’s in the 200-meter backstroke. And that makes Ledecky a pleasure to observe from a pure emotional standpoint.

During Ledecky’s press conference on Saturday, she blushed when several journalists kept asking about how she felt while watching her competitors go for second on the previous night. “Destroyed” is the word DiRado chose to describe the state of the competition.

She is. In the two press conferences I have attended. I don’t think a smile has left her face for more than a second.

As a journalist, I don’t root. It has been hard the last two weeks. But I am unabashedly a fan of Katie Ledecky.