About Us Sports Journalism Blog 2016 NCAA Men's Basketball Final Four Postcard from Houston: A decision, a dream and a story to write

Postcard from Houston: A decision, a dream and a story to write

I still remember the day fondly, sitting on my couch on one blazing Arizona summer day. Fall courses of the final semester of my undergrad career at Arizona State University were set to begin. I was coming to a crossroads, not sure where to go or what to do next.  Grad school was a thought that crept into my head that day. I was set to complete a B.A. in communications and media studies, but I knew my passion could be found in the field of sports journalism.

So I began my search for a graduate program that was best suited for me.  I was aware that ASU offered the program I was looking for, but I knew that my true passion was college basketball, something that just isn’t all that big of deal in Phoenix. 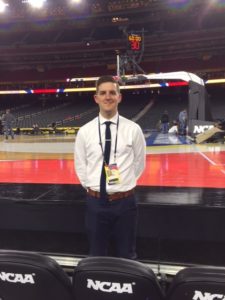 In my Google search that day, I came across the sports journalism program at IUPUI.  It was located in Indianapolis, the heart of college hoops. A program that had produced Zak Keefer of the Indianapolis Star, someone I had read for quite some time and grown to respect.

Something clicked that afternoon. I knew IUPUI was the perfect place for me. I applied to start just a few short months later, and was eventually accepted.  So I packed up my things and took a giant leap of faith, moving 2,000 miles across the country to an unknown city and an apartment that I knew only from the sight of one picture.

Fast forward three months, and here I sit at the gate area of Houston’s Hobby Airport, hours after covering the pinnacle of college basketball, the Final Four.

The Sports Capital Journalism program gave me the opportunity of a lifetime. Over the past few days, I’ve had the chance to rub shoulders with and ask questions in the same media swarm as the likes of veterans such as Pat Forde, Andy Katz and Mike DeCourcy. I’ve experienced the frenzied media area and locker rooms, with herds of reporters scrambling for quotes to finish a story in the wee hours of the Sunday and Tuesday mornings following the weekend’s games.  And I’ve felt the adrenaline still flowing after settling into the hotel at four in the morning.

This is a kind of on-the-job training that you simply cannot get at any other university. Standing on the court amidst the falling confetti, just feet away from the Villanova squad hoisting its new hardware, it felt like a dream. I had just witnessed Villanova’s last-second victory over North Carolina, one of the greatest college basketball games in the history of the sport. But I quickly snapped out of my stupor. I had a story to write. I had to put into words the magnitude of the moment. The very moment that I had prepared for during the previous four days.

This week was an experience that I will cherish for the rest of my life. Covering such an event is an opportunity that some may go their entire careers without experiencing. And here I sit in the infant stages of my own career, with my first major event under my belt. Being able to actually go through the motions and have a first-hand experience of what it’s like to cover one the biggest sporting events in the country has been invaluable. Going through the frenzy has shown me that this is, in fact, something I can do and do well.

My hope is that this will become the first of many Final Fours that I will cover. But it will be impossible to top the journey to and the magnitude of my first.