Postcard from Arizona: A vastness almost impossible to grasp 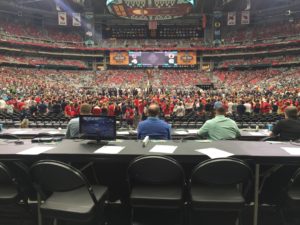 It was the size that got me.

I was comfortable with writing the story. The terrain was different and I had a lot to learn, but I knew I could follow the game, get the quotes, and tell the story.

The size, however, stunned me. With over 77,000 people in University of Phoenix Stadium for the 2017 Final Four, the size of this crowd was hard to comprehend. From the floor, it’s like a different world than sitting in the stands. I was no longer part of the crowd. I was on the same level as the action. It was like standing at the foot of the Grand Tetons or the Empire State Building. It’s almost impossible to grasp being near the center of a crowd that size.

Before I entered the Sports Capital Journalism Program at IUPUI, the largest event I covered was the Southeastern Conference cross country championships in my home town in Maryville, Tennessee. I’ve worked dozens of high school football and small college basketball games, but nothing larger than a few hundred people. As I prepared for this trip, my professor, Malcolm Moran, told me, “At the end of the day, it’s still just a basketball game. If you can cover a high school football game, you can cover a Super Bowl.”

I believed him. High school football can represent a challenge in its scarcity of information. But I still stared wide-eyed into the mass of people, wondering how a college student, a freshman like Zach Collins from Gonzaga, felt when senior Przemek Karnowski fell to the ground holding his head and all eyes looked to Collins to replace him.

Or what went through the mind of Gonzaga freshman Killian Tillie when he stepped to the foul line to send the Bulldogs to their first national championship game in the closing seconds of the semifinal win over South Carolina. Tillie said he was only thinking about making his free throws, but I still don’t understand how. I’ve been on that floor. Sinking those two shots to end the game to make Gonzaga history was awe-inspiring mental discipline.

I have a new-found appreciation for players who handle situations that would make the average person crack under the pressure. It’s an underrated part of their greatness, and it’s a lesson I hope stays with me as I continue my career.