INDIANAPOLIS – The winning coach had his head in his hands. When the final horn sounded and there was no more grinding left to be done, Michigan State coach Tom Izzo turned his back on his team’s celebration, faced away from the court at Bankers Life Fieldhouse and pressed his palms against his head so tightly that his eyes bulged and his face became distorted.

His Spartans had just defeated Maryland, 64-61, to reach the conference championship game for the sixth time in search of their fifth Big Ten tournament championship. The Spartans made just 29 percent of their second-half shots and 42 percent for the game. They had two field goals in the last 11:50. Their point total was 16 less than Michigan State’s season average.

And yet with 0.8 seconds to go and the Spartans ahead, 63-61, Michigan State senior Denzel Valentine, the national player of the year candidate who led his team with 18 points, was instructed to miss one last free throw. Valentine made it, giving Maryland’s Melo Trimble, who was held to 2-of-15 shooting and 11 points, a chance for one last unsuccessful heave. 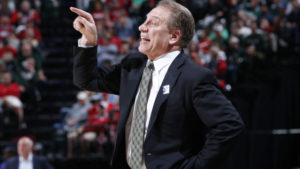 “Well, I was laughing, if you want the truth,” Izzo said. “I said we’re supposed to miss the free throw and we make them. We’re supposed to make a lot of shots that we missed during the game. I was just thinking to myself, ‘Oh, my God, what a bizarre way this whole thing went.’”

The Spartans (28-5) will move on to the championship game against Purdue, which defeated Michigan in the other semifinal. Michigan State has won 12 of its last 13 games. Izzo’s record in the month of March improved to 99-42 for a winning percentage of 70.2. His teams have a record of 24-7 in the Big Ten tournament a 77.4 percentage that leads all coaches.

Michigan State won with the resourcefulness that has become a signature of the Izzo era. Maryland, the only team in the conference with five players averaging in double figures, had just two – Trimble and Robert Carter, with 18 points – that reached double figures in the game.

Maryland was held to just 18 of 54 shots, or 33.3 percent, which equaled a season-low. Spartan freshman forward Deyonta Davis blocked a layup by Maryland freshman center Diamond Stone with 29 seconds to go to preserve a 60-59 lead. “In the end, the last three minutes, they were able to make one or two more plays than we were, than we could,” said Maryland coach Mark Turgeon. And Davis had the big block in there, which is big. Would have put us up one.”

But for the Terrapins (25-8), the defeat left them with a sense of achievement. “I think we held them to like 28 percent in the second half,” said senior guard Rasheed Sulaimon. “There were a couple of loose balls where they got open shots and they scored and if it weren’t for that they probably would have a lower percentage. I definitely think we played to our potential tonight defensively. Going forward, it has to be like that every night to give ourselves a chance to win.”

Valentine said that this win against Maryland wasn’t pretty but that the team is going to learn from it. “They forced us to do some things offensively that we’re not used to doing,” he said. “They kind of took us out of our game. We kind of panicked there in the second half. And I think that was the biggest thing that we need to do and learn from. If teams give us a different look on offense and when it’s a tight game like that, we need to find a way to win. And we found a way to win.”

Michigan State has a 6-4 record against Maryland and has won three of the five meetings since the Terrapins joined the Big Ten. “Our conference is, I think, a great conference,” Sulaimon said. “Every game that we played during the conference, every game we played here in the Big Ten tournament is definitely going to prepare us for the NCAA tournament, especially a team like Michigan State. It’s a bad feeling in our stomachs right now, but I definitely think we can take a lot of positives from this and remember this feeling. Our back’s against the wall. If we lose now, our season is done.”

Turgeon said that his team had a feeling of achievement as it looks ahead to the NCAA tournament. “There’s no question, coaching staff, players, everybody involved in Maryland basketball feels really good,” he said. “Feels better than we did coming into this tournament. We wanted momentum. We wanted to beat Michigan State. We couldn’t do it today. Maybe if we get them again in a couple weeks, we’ll be good enough to beat them, but today we weren’t.”