Michigan, Once More, Leaders and Best

The Wolverines (12-1) won their first conference championship since 2004, the longest span without winning or sharing a Big Ten title in the 123 years since the first triumph. Michigan’s victory, in its first-ever Big Ten title game appearance, positioned the Wolverines for their first trip to the College Football Playoff, where they will meet the Georgia Bulldogs in the Capital One Orange Bowl in a semifinal on New Year’s Eve.

The 2004 Big Ten title was shared with the Hawkeyes. This time, Iowa was simply outmatched.

“There’s no team I love more than this team,” said Michigan head coach Jim Harbaugh. “They give it their best every day. Nobody ever thinks it’s that simple, but it’s that simple. There are a thousand other little things that go into it, but when you’re around a group of guys and you watch them making sure that they give it their best, their very best, you know, every single day.”

Harbaugh was calm and measured in his postgame press conference. Harbaugh became the first coach in Big Ten history to lead his alma mater to a Championship Game victory and the fifth individual to win a Big Ten title as a player and a coach.

Rather than being overly emotional, he credited his athletes and projected a businesslike demeanor that reminded everyone of the work yet to be done. Nonetheless, he must be well aware of the threshold that he and his Wolverines have now crossed.

After all, Harbaugh has taken his fair share of criticism as head coach in Ann Arbor. His overall record of 49-22 through the 2020 season was respectable, but until now, his Michigan teams had failed to summit the mountains they were expected to conquer.

Take, for example, five straight defeats to the hated Ohio State Buckeyes since 2015, the season Harbaugh became head coach. Consider also two gut-wrenching losses to the Michigan State Spartans this year and last year, by margins of four points or less. At one point, there did seem to be a gap between the Wolverines and their biggest rivals, although when a reporter posed the question in 2019, Harbaugh rebuffed him: “I’ll answer your questions, not your insults,” he said.

His job security had become a consistent theme. A pay decrease and changes in the coaching staff were carefully analyzed. In the 36 seasons from 1969 through 2004, including Harbaugh’s career as a quarterback, the Wolverines won or shared 21 Big Ten titles. This fall, seniors in the Michigan student body were barely old enough to remember the most recent one.

Harbaugh did admit to feeling some pressure. “Oh, yeah, I could feel it,” he said. “We all could. We talked about it last night. How much more can we pile into one game, the importance of one game?” 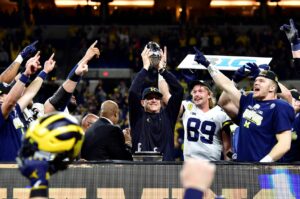 Within eight perception-altering days, all those intense disappointments were pushed into the past. The Wolverines finally vanquished Ohio State on November 27, doing so decisively by a score of 42-27. Senior running back Hassan Haskins tied a program record with 169 rushing yards and punched in five touchdowns that day, while Michigan’s formidable defense held C.J. Stroud and the Buckeyes well under their season scoring average of 45.5 points per game.

On Saturday night, before a Big Ten championship-record crowd of 67,183 – a year after COVID-19 restrictions limited the crowd to 3,178 – the Wolverine defense simply smothered Iowa, limiting the Hawkeyes to one field goal on three red-zone trips. The Hawkeyes’ offense floundered throughout the game, especially on the ground where Iowa averaged a mere 3.2 yards per rushing attempt. Alex Padilla relieved Spencer Petras in the third quarter, but neither Iowa quarterback found any real success.

“They made it really tough to run the football tonight,” said Iowa coach Kirk Ferentz. “We expected that. But we were hoping to run with success, too.”

Michigan senior defensive end Aidan Hutchinson had one sack and one tackle for loss, but his consistent intangible impact on the game made him the first non-quarterback and non-running back to ever win the Grange-Griffin Most Valuable Player Award.  During postgame celebrations, his teammates began chanting “Hutch for Heisman!” Hutchinson’s conference-best total of 14 sacks — and counting — surely makes him a candidate for the Heisman Trophy as college football’s most outstanding player.

Haskins, too, brought home a piece of history. Although he rushed for just 56 yards at 3.3 yards per carry, the Missouri native’s two touchdowns gave him 20 rushing scores on the year. That’s a new Michigan program record, eclipsing the mark of 19 touchdowns achieved in 1968 by Ron Johnson. The Hawkeyes had allowed an average of 105.8 rush yards per game (third-best in the Big Ten) but Haskins helped his team come within 0.8 yards of that mark in the first quarter.

Michigan would finish with 211 yards on the ground, outgaining Iowa by a total of 461 yards to 279.

Michigan now looks ahead to the College Football Playoff. Win or lose, the Wolverines have reached new heights.