About Us Sports Journalism Blog 2017 NFL Scouting Combine Knoxville to Indianapolis: Peterman and Dobbs Meet Again at the NFL Combine

Knoxville to Indianapolis: Peterman and Dobbs Meet Again at the NFL Combine 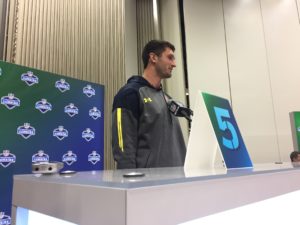 Quarterback Nathan Peterman fields questions from the media at the scouting combine in Indianapolis.

INDIANAPOLIS- Four years ago, Josh Dobbs and Nathan Peterman were together on the quarterback depth chart at the University of Tennessee. Today, they’re meeting again at the NFL scouting combine.

In 2013, Dobbs was a true freshman and Peterman a redshirt freshman. They were highly recruited out of high school, and both were trying to earn their position at a low point in Tennessee football history. The Vols were coming off three years under head coach Derek Dooley and a 15-21 record. Tensions were high in Knoxville for a redemption under new head coach Butch Jones.

Junior Justin Worley was named the starter to open the season, but was replaced after an embarrassing 59-14 loss at Oregon.

Jones gave the starting job to Peterman, looking for a spark against the Florida Gators in Gainesville.

Peterman’s performance went as badly as the team’s had been the week before. Three possessions. Three turnovers. Just 17 minutes after kickoff, Peterman was back on the bench.

“That’s not how I envisioned my first start,” Peterman said Friday at the combine. “It meant a lot to me being from Florida.”

Four weeks later, Dobbs was thrown into the fire in Tuscaloosa after Worley (who suffered a thumb injury a game earlier) threw a second interception against then-defending National Champion Alabama.

“‘We’re on the one-yard line and Coach Jones said, ‘Dobbs, you’re in.’ I said, ‘Are you sure? Am I really about to come in?’” Dobbs laughed.

Dobbs fared slightly better than Peterman had against the Gators, completing five of 12 passes for 75 yards and 19 yards on the ground, and was named the starter for the remainder of the season.

The 2014 season began the same way as the previous year had, with Peterman and Dobbs on the bench behind Worley, who was a senior. But after a torn labrum against Ole Miss ended Worley’s college career, Peterman and Dobbs were once again thrown into the toughest game of the season against Alabama.

Peterman lasted just two series before Dobbs replaced him for good. At the end of the season, Peterman announced he was transferring to Pittsburgh.

On Friday at the scouting combine, though, Peterman said he sees that time as critical in his development into a potential NFL player.

“At Tennessee, it was tough, but I wouldn’t have it any other way,” he said. “The experience I went through and the adversity I had to overcome has made me the player I am right now. I think it’s going to help me succeed in the future.”

Peterman followed former Tennessee offensive coordinator Jim Chaney to the University of Pittsburgh, where he was named the starter just two games into the 2015 season. His numbers grew from 2,287 yards passing and 20 touchdowns that season, to 2,855 yards and 27 touchdowns in 2016. Peterman led the Panthers to upset victories over eventual Big Ten champion Penn State and eventual National Champion Clemson.

His Pitt career was capped off by a stellar performance at the Senior Bowl, where he earned comparisons to Kirk Cousins of the Washington Redskins and began hearing labels like “this year’s Dak Prescott,” the rookie quarterback of the Dallas Cowboys.

Peterman reflected on the lessons he learned transitioning to Pittsburgh that he now brings with him to the NFL combine.

Dobbs went on to lead the Vols to consecutive 9-4 seasons with appearances in the Outback and Music City Bowls. He finished his career in Knoxville with 7,138 yards passing, 2,160 yards on the ground, and 87 touchdowns total.

When asked about seeing Peterman at the combine and previously at the Senior Bowl, Dobbs reflected on their early days together in Knoxville.

“It’s really cool,” Dobbs said. “I remember sitting in the QB room with Coach (Mike) Bajakian, who was our QB coach. He was always telling us, ‘I’m making you guys draw up plays so that when you guys go to combine you know what the coach is looking for.’ So we’re both here and we’re living out this experience together.”