About Us Sports Journalism Blog Uncategorized From the Archives: When the Confetti Falls | Reflections on a First Final Four

From the Archives: When the Confetti Falls | Reflections on a First Final Four

Cory Collins covered the 2014 Final Four in Arlington, Texas while a graduate assistant for the sports journalism program on the IUPUI campus. Here is his reflection on the weekend that led to Connecticut’s national championship. 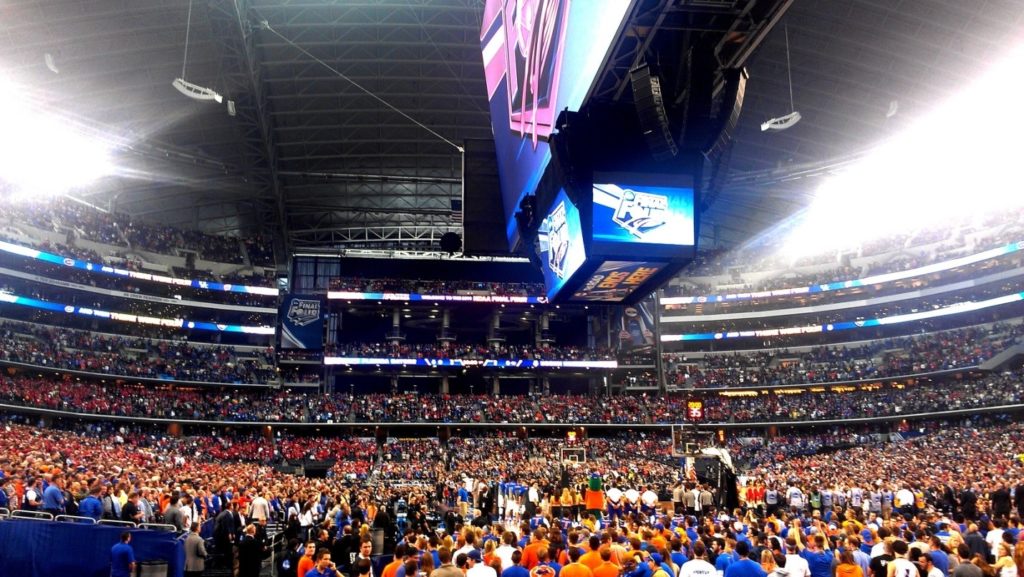 Rarely had it sounded so sweet.

Despite some-70,000 bodies standing in the spacious confines of AT&T Stadium, it was at first silent, but for the song. Chris Daughtry provided the lyrics, but it might have been any voice that incited the fireworks, the transition from quietness to noise.

And what’s become cliché finally felt fresh to me: that land of the free, that anthem’s high note.

The cheer that followed was raucous. Press row shook slightly with the tremors of fans by the thousands taking their seats, the Final Four starting at last. And still I stood, holding back the tears, wondering how a back-wood Kentucky boy had earned a seat at this table. In awe, inspired, I soaked it in: the fortune of the freedom to write stories, the fact that no one cast me a curious gaze.

As if I belonged.

Still I stood, for a few seconds more. I found it easier to stand up, to look up, afraid the dream would dissipate. That I would look down and see someone else, someone more deserving, sitting in my seat.

If it was a dream, it was a good dream –a week-long slumber in which I rarely slept.

And while the regimen should have physically broke me down (the 5:00 a.m. workouts, the 12-hour days, the shuttle buses, the deadlines, the late goodnights, the cycle renewed the next day), the experience built me up.

Each day, a who’s who of basketball writers assembled in the basement of Arlington’s AT&T Stadium, staring at a docket of press conferences, games, interviews, and lunch buffets. I was handed the same schedule, the same quotes, the same plate on which to pile my food.

And they never treated me with kid gloves. It’s one thing to be there. It’s another thing to belong. This experience allowed me to not only witness how the Cinderella stories and March Madness narratives are written, but allowed me to play a part. There’s a difference—and you don’t know it until it you send in that story and know it’s not an assignment, but an archived piece of the game’s history.

So it built me up because no boundary was built between this kid and the industry veterans. And though it felt good to insert a question into the press conference or speak up in the scrums, it was the simple things that resonated.

It was ESPN’s Dana O’Neil asking me to borrow a sound recording after a glitch lost her a quote. It was riding in a rented car with the Associated Press’s Jim O’Connell and hearing his version of the basketball gospel, as if the ghost of Naismith (with a New York accent) spoke through him. It was that flutter in my chest each time a security guard looked at the credential on my chest, nodded, and waved me through.

Ultimately, though, what truly built me up in Arlington took place beyond the boundaries of that basement, beyond the borders of Texas. The not-so-dirty-little-secret of storytellers: we need an audience. Otherwise, our words are but the repeating refrain in an echo chamber, indistinguishable, just noise.

Each day, each night, stories were sent. But the fruit of that labor was the reciprocation: they were also received.

Whether it was my piece on Kentucky and its relationship to basketball, my profile on Richard Clarkson, or my stories on Connecticut’s improbable run, I could see readers reacting in real time. These stories didn’t just exist. They mattered to someone, somewhere.

Perhaps I didn’t make a dime. But that’s a true writer’s salary.

Before it sounds like I’m bronzing my own bust for some sportswriter hall-of-fame, a caveat: the Final Four built me up, but also, all at once, brought me back to reality. It humbled me.

For one, none of it happens without an actual Hall-of-Famer: Malcolm Moran. To stand at his side at an event like this is to see the respect he has demanded, not through assertion, but through good work and kindness. People seek him out because he always listens and he’s worth listening to. Taking a step back from the experience, I realized that this man had forgotten more basketball than I had seen. He’d written more stories than I had read. So to have him as my editor, resource, and guide through this experience was not just helpful. It was humbling. Because he’d let me step into a place he’d not only inhabited, but defined.

Malcolm also allowed me to rub shoulders with some industry giants. Thanks to his affiliation with the United States Basketball Writers Association (as a Hall-of-Famer and former President), he invited me and John Bauernfeind to their events. They write for a living, so I knew their stories would prove worth remembrance. But their wisdom was just as worthwhile, their inclusion just as sweet.

That said, a young man should be reminded of his place on the totem pole of journalism.

Enter John Feinstein. Yes, that Feinstein: the sports writing legend, Season on the Brink, author-of-23-books-Feinstein. As if I didn’t owe enough to him for his influence, I discovered at a USBWA dinner that I’m now forever at his service.

We’d walked as a group to a Mexican restaurant in downtown Dallas (John and I looking like Malcolm’s young entourage) in a sea of basketball’s greatest voices, well-dressed and stories poised. We’d been through all the niceties –those handshakes of introduction, those hasty “How are you, nice to meet you” conversations that often swallow the name you try to remember later.

But more importantly, I’d worn a black vest, looked a little eager, a little tan and these men were hungry. I set myself up, really. Mere minutes after we’d met, Feinstein turned to me, and in a rare moment, slowed down his speech so I’d understand him through the noise. “Excuse me,” he said. “We’re the basketball writers. Would you be able to take us to our seats?”

He didn’t think I was one of them. He thought I was a waiter.

I’ll forever cherish that memory. Not simply because it was funny, and ironically, made me harder to forget. It represented how lucky I was to be standing there.

Time and time again, that feeling of fortune found me. That feeling of taking part in something special, an experience I still needed to earn. It hit home hardest as I spoke to Rich Clarkson, a man witnessing his 60th Final Four, and still finding new ways to capture its magic.

And there I stood at my first, learning its ways.

That’s probably what I should be selling: the learning.

This is the site of a school of sports journalism. This experience did take place because of this school’s generosity, its funds, its openness to allowing students not just to explore the issues of sports media, but encounter them. In that vein, I assure you, I received a one-week crash course in sports writing from IUPUI’s transplanted campus in North Texas.

But by definition, every school of journalism provides an education. That’s not what sets this experience apart. Deadlines, interview skills, a knowledge of the game –these are universal facets of this industry.

It’s one thing to learn a lesson. It’s another thing to live it.

Covering the Final Four, I got to live the lesson. My course on deadline writing didn’t take place in a seminar room, but a locker room littered with confetti, scribbling quotes in the scramble to capture the hearts of champions. My class on unearthing untold stories didn’t require just a roomful of desks, but a basement of tables, upon which hundreds of journalists sat, covering the same four teams, searching for something no one else could see.

And my capstone project on research, game notes, deciphering what’s pivotal in the play-by-play –it was no exam proctored by a professor, no hypothetical setting. It was a test administered inside a stadium that seated 80,000, all screaming, while the final moments of the basketball season sped by at rapid pace.

Because of all of that, I didn’t just learn it, I lived it. And so doing, gleaned the most necessary lesson for a young person in this industry, something that can’t be learned in a classroom.

I learned that I belonged. 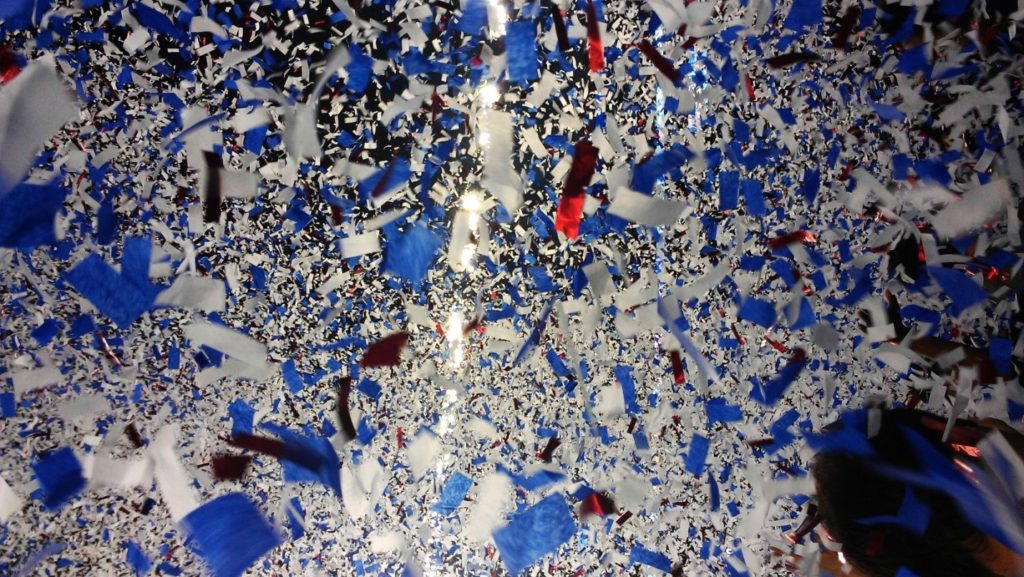 When the confetti falls, a game, a season, a story, ends. And for the writers drowning in its torrential sheen, the night is just beginning.

Standing there beneath it, I’d come full circle.

The moment probably should have taken my breath away. UConn celebrated with unfiltered, unfettered joy. Fans converged courtside to witness history in the immediate present. A screen larger than the state of Connecticut, itself, displayed scenes of March Madness, in which the chorus spelled out that familiar refrain:

But as this song played, as I still stood, there was no more awe, no more incredulous inspiration. Just a job to do, a story to file, my own clock starting to tick as soon as the game clock counted down its final seconds. So I didn’t just stand. I moved.

And that’s when I knew: I belonged.

That’s when I knew: they could fold up my seat, but the story would linger.