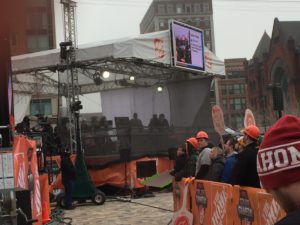 INDIANAPOLIS — I didn’t really know what to expect. Didn’t know what I’d do just standing around for three-plus hours. I was getting out of bed before sunrise and heading out into a cold Indiana morning. But my uncertainty and the cold weather never changed my mind. I was going to College GameDay.

College GameDay is ESPN’s three-hour college football show, broadcasting live from different college campuses each Saturday from 9 a.m. to noon ET. Saturday, the show came here to broadcast from the site of the Big Ten Championship game between the Iowa Hawkeyes and the Michigan State Spartans.

I grew up as a college football fan in Chicago, where college sports takes a backseat to the pros, and was never able to attend a live broadcast. I’ve enjoyed watching College GameDay on television for years; it’s the one ESPN show I simply can’t miss. However, watching the show on television will never be the same after experiencing it live.

All the usual elements were there Saturday. The fans with signs, some more lewd than others. First-year host Rece Davis, analysts and contributors, including Lee Corso and his headgear (he chose Michigan State). The guest picker, former Iowa and Indianapolis Colts tight end Dallas Clark, appeared in a Hawkeye T-shirt. And, like clockwork, Ol’ Crimson, the Washington State Cougars flag which has appeared on every College GameDay show since 2003. 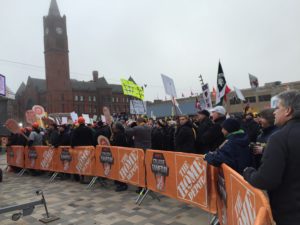 The scene up close and personally at College Gameday.

Being at the show, though, is far different from watching it on television. In many ways you go from viewer to participant. College GameDay isn’t College GameDay if not for the fans who come out to create the atmosphere of cheering and friendly heckling.

“I actually love it when we have a big crowd because I think it really gives energy to the show,” Davis said on Friday. “I mean, we want to bring our own energy. Like how [Clemson coach] Dabo Swinney says ‘bring your own guts,’ we want to bring our own energy. But at the same time it’s great to have a big crowd behind us, and it’s very gratifying to know that the show is important to them and they want to be part of it.”

The crowd at Pan Am Plaza, not far from Lucas Oil Stadium, continued to grow throughout the morning, so much so that trying to navigate through it was a hassle. Those tightly packed fans represented a wide range of teams from throughout the country: Ohio State, Auburn, Oklahoma, Clemson and Murray State, among numerous others. However, the majority of attendees were clad in Hawkeye black and gold or Spartan green and white.

When College GameDay kicked off at 9 a.m., the temperature was a brisk 30 degrees. The morning fog was still thick. There were brief flurries. It would only warm up to 36 degrees over the next three hours. But once you got to the set, there was so much going on that the weather became an afterthought.

Home Depot and Pizza Hut had tents where fans could make signs to hold up in the show’s background. Pizza Hut gave out free slices of pizza. Coca-Cola gave out free cans of soda. Cheez-It, which gave out free snack-size bags, had a bean bag-type game. Fans threw footballs in the few open spaces they could find. The Iowa and Michigan State mascots entertained fans during commercial breaks with stare downs, dance-offs and push-up contests. 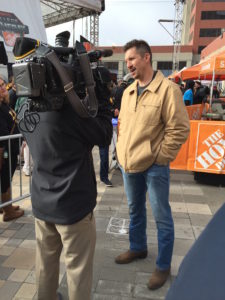 Oh yeah, and there was a live college football show to watch.

Watching that show in person, you see things you can’t on television. There’s the sheer size of all the set’s pieces, which producer Lee Fitting said requires six semi-trucks and several smaller trucks. There’s the employee who signals to the crowd when to cheer and hold up signs. And there’s the near-triple digit number of behind-the-scenes workers and security personnel who make sure the show goes off without a hitch.

You also don’t see the talent interact with the fans much. Saturday, the show’s four regulars – Davis, Corso, Kirk Herbstreit and Desmond Howard – remained on the main set for nearly 30 minutes to take photos with fans. David Pollack, a contributor on the show, spoke with fans and took photos with them between his segments.

For years I’ve only been able to judge College GameDay as a television show. Saturday showed me that College GameDay is an event, a spectacle to behold. It’s an occasion to get together and celebrate the passion and pageantry that is college football.