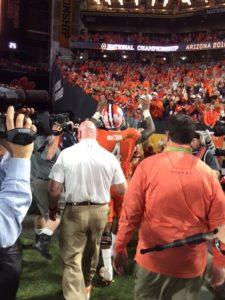 Clemson Tigers sophomore quarterback Deshaun Watson waves to Tigers fans as he leaves the field following the 45-40 loss to the Alabama Crimson Tide in the College Football Playoff National Championship on Jan. 11 at University of Phoenix Stadium in Glendale, Ariz.

Glendale, Ariz. – Clemson quarterback Deshaun Watson walked off the field, helmet in hand. He didn’t say anything as he turned right and entered the hallway to the Clemson locker room. His face was stoic, only looking forward.

The sound of the celebration happening out on the field faded away as Watson got closer to the locker room. Alabama had just captured its fourth national title in seven years, beating Watson’s Tigers in a surprisingly high-scoring 45-40 affair on Monday in Glendale, Ariz.

Watson walked past Marcie Radakovich, the wife of Clemson athletic director Dan Radakovich, who said, “I’m sorry Deshaun. I’m so sorry Deshaun.” as he was entering the locker room. He may have heard it. He may not have. He just kept walking.

Back out on that field, Watson had just played out of his mind. But now he was lost in thought as his record-setting performance wasn’t enough for Clemson to topple mighty Alabama and complete a perfect season

“They earned it,” Watson said. “All credit goes to Alabama for what they did. They’re national champs. We got to go back next year and grind harder and try to be champs, too.”

Watson had crafted a gem, solving an Alabama defense that was supposed to crush him.

He wasn’t supposed to have running lanes. But he danced his way to 73 rushing yards, the most allowed by Alabama to a quarterback this season. The previous high was 29 yards.

He wasn’t supposed to have time in the pocket. But he threw for a championship-game record 405 yards. He tossed four touchdowns and could have had another if not for a last-second pass breakup in the corner of the end zone.

“This guy, he’s special,” Clemson coach Dabo Swinney said of Watson. “Again, he’s got great toughness, great heart, a great mind for the game, and just made some huge plays all the way to the end.”

Watson and the Tigers had the first 15-0 season in modern major-college history in their sights heading into the fourth quarter. Watson was clicking on all cylinders. Alabama couldn’t stop him. So, why not keep him off the field? That’s what Alabama head coach Nick Saban was thinking when he gambled on an onside kick early in the fourth quarter.

“I made the decision to do it because the score was [24-24] and we were tired on defense and weren’t doing a great job of getting them stopped, and I felt like if we didn’t do something or take a chance to change the momentum of the game that we wouldn’t have a chance to win.”

“It was one thing to give up that play but that doesn’t mean you don’t go out and do your job on another play,” Swinney said.

Watson, as he had done all season, gave Clemson everything he had. The Tigers went down 11 in the fourth quarter. He led a touchdown drive. They went down 12. He led another score.

But, the Tigers were caught out of position on a few plays that proved decisive. They gave up 53- and 51-yard touchdowns to O.J. Howard and allowed a 95-yard kickoff return by Kenyan Drake.

“We got to make those plays,” said linebacker B.J. Goodson. “We can’t have those types of plays in this type of a game on this stage.”

Clemson gave up 24 fourth-quarter points after holding Alabama to 17 through the first three quarters. It saw its streak of 51 consecutive wins when entering the fourth quarter with a lead come to an end.

“We pride ourselves on being a fourth quarter team,” said walk-on wide receiver Hunter Renfrow, who caught two touchdowns. “But we didn’t get it done tonight.”

The defensive and special teams miscues, they weren’t supposed to happen. Not on this stage. And not to this Clemson team. Not to the team that beat a ranked Notre Dame, finally got past rival Florida State and became the first team in program history to win eight conference games in one season.

If not for those few breakdowns, the Tigers may have run away with the game, and they knew that. They plastered 550 yards of offense on an Alabama defense that came in allowing only 256.8 yards per game, the No. 2 mark in the nation. However, that wasn’t enough, and the Tigers dropped their first-ever game when going over 500 yards of offense, falling to 85-1-1.

“We know we beat them up and down the field. Just the scoreboard didn’t show it,” said defensive end Shaq Lawson, who played through an MCL sprain in his left knee and registered two sacks. Kevin Dodd, Lawson’s bookend on the defensive line, had himself a game, posting five tackles for loss and three sacks.

Added offensive lineman Eric Mac Lain: “I thought we [the offensive line] dominated the whole game. … They way that we [the Tigers] played, it shows that we belong [alongside Alabama], obviously.”

Watson ended his season as the first-ever FBS player with 4,000 passing yards and 1,000 rushing yards in a season. But that wasn’t his goal. Or the team’s goal. The goal since training camp was to go 15-0 and win the national championship, not worry about setting personal records.

“I just wanted to get the win and do something that we haven’t done in 34 years,” Watson said. “But at the end of the day, I love my teammates, love my brothers, and you’ll see us in Tampa next year.”