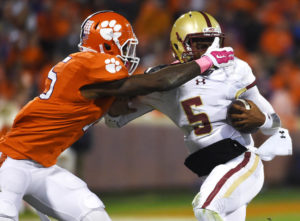 PHOENIX – Clemson safety T.J. Green hated everything Alabama as a kid. The team, the colors, the houndstooth hats. Didn’t like the Crimson Tide one bit.

Green grew up in Sylacauga, Alabama, a pro-Crimson Tide town despite being located a nearly equal distance between Tuscaloosa and Auburn, the locations of the University of Alabama and Auburn University, respectively. He heard so much about how great Alabama was that it drove him crazy.

Green also grew up in a divided house. His parents were diehard Alabama fans. His brother, though, was an Auburn fan and got him hooked on the Tigers.

“He turned me on to Auburn at a young age,” Green said Saturday at Media Day, unable to remember the exact age he declared Auburn his team. “I fell in love with that blue and orange and was hooked and was immediately an Auburn fan.”

Green’s hatred of the Crimson Tide started to subside during his senior year of high school when he thought he had a chance to attend Alabama, the powerhouse of college football. The Crimson Tide had won their second straight title and third in four years during the 2012 season, Green’s senior year in high school.

If Alabama had come calling, he’d likely be in crimson and white during Monday’s title game. However, head coach Nick Saban never extended a scholarship offer to the No. 18-ranked player in the state. 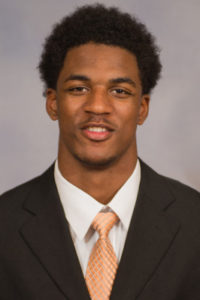 “I felt like they felt like I wasn’t good enough to play for them,” said Green, the only player on Clemson’s roster from the state of Alabama.

Now, he’s not so focused on Alabama, which can see what it missed out on, since he’ll be fighting alongside his Clemson brothers when the No. 1 Tigers and No. 2 Crimson Tide square off in the College Football Playoff National Championship presented by AT&T. The game is set for 8:30 p.m. eastern time on Monday at University of Phoenix Stadium in Glendale, Arizona.

Green and the secondary will be tasked with slowing down Alabama’s passing game, led by quarterback Jake Coker, who went off in the Cotton Bowl victory over Michigan State. Coker completed 25 of 30 pass attempts for 286 yards and two touchdowns as he earned the game’s Outstanding Offensive Player award.

Alabama wide receivers coach Billy Napier said he believes the biggest challenge for the Crimson Tide offense is precision passing. That’s because the Tigers mix up coverages in the back end. The safeties, Green and fellow junior Jayron Kearse, are “very big, long [and] tall safeties,” according to Napier, with the speed necessary to break up deep passes as well as chase down players in the open field.

Calvin Ridley, Alabama’s standout freshman wide receiver, said the Tide will need to stretch the field with deep passes early on. That will help open up short and intermediate routes as well as aiding in the ground game. However, that may be a challenge against Kearse and Green.

Safety, though, wasn’t always Green’s preferred position to play. The three-star prospect who played both wide receiver and defensive back at Sylacauga High School wanted to play wide receiver on the collegiate level and was listed as an athlete during the recruiting process. He received scholarship offers from mid-majors and verbally committed to the University of Alabama at Birmingham in November 2012.

However, Green’s journey didn’t end there. Clemson offensive line coach Robbie Caldwell had gotten a tape of Green’s highlights from a friend of his who had a recruiting service. Caldwell told head coach Dabo Sweeney and his staff that they needed to look at the film.

Already late in the recruiting process, Clemson extended Green an offer in January 2013. Green visited Clemson later in the month and committed before leaving campus.

“When I got to Clemson it was just they embraced me coming,” Green said. “They treated me like they knew me for my whole life. It was a family atmosphere, and I just felt comfortable there.”

However, Auburn, the team Green grew up loving, extended him an offer soon after Clemson did.

“They jumped on him pretty hard to get him to stay in the state,” Caldwell said.

Green stuck with his Clemson commitment and said he felt it was the right decision for him although it was “beyond hard” to turn down the orange and blue Tigers in favor of the orange and white Tigers. 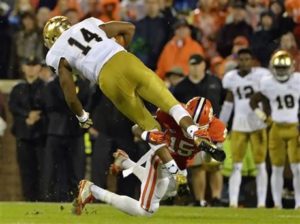 Wanting to have the ball in his hands, Green was used mainly on special teams and as a wide receiver his freshman season. However, an offseason conversation with Kearse, his roommate, convinced Green to switch to defense prior to his sophomore season.

Green registered 24 tackles and his first career interception, which came in a 40-6 Russell Athletic Bowl victory over Oklahoma, as a backup safety his second season. He’s still working out kinks in his first full season as a starter on defense, but defensive coordinator Brent Venables said Green has come a long way in terms of his understanding of the game, spacing around him, his positioning and his technique.

“He certainly has his blemishes from this year, but he’s learned from them,” Venables said. “He takes responsibility. [He’s] very prideful. He’s got a great skill set. He’s long. He’s very fast. He’s every bit his 4.4 [40-yard dash time]. And he always plays with incredible effort.”

The numbers help back that up. Green’s ability to chase down players has allowed him to record 117 tackles, which ranks third on the team, and force two fumbles. His range has helped him break up three passes. Green lines up all over the field in Clemson’s multiple defense, and defensive backs coach Mike Reed said that’s allowed Green to make an impact in the backfield, which is evidenced by his five tackles for loss, one sack and one quarterback hurry.

Green will look to add to those numbers as he and Clemson seek the program’s first national championship since 1981. Asked twice about how sweet it’d be to beat the in-state team that passed him up, he downplayed the fact that the game is against Alabama, saying winning a championship would be huge no matter who they beat. Winning that championship would require taking down mighty Alabama, the team of the city of Sylacauga. Green’s parents, hometown and high school are behind him and the Tigers in that endeavor.

“It’s been special for me to know that I have my whole city behind me,” Green said. “You know, a bunch of lifelong Alabama fans choosing just one day to be a Clemson fan for us. It’s special.”