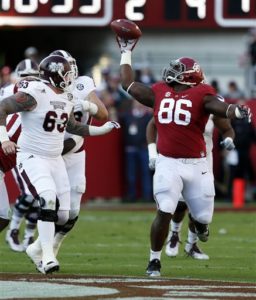 DALLAS — The stern, bearded face, coupled with an intimidating presence, epitomizes the idea of an Alabama defensive lineman. At 6-foot-4 and 312 pounds, junior defensive end A’Shawn Robinson can appear like a brick wall, obstructing anything in its path.

But don’t let that appearance fool you. Robinson is a businessman, clad in football pads and uniform rather than a suit.

His job this week is a tough one – to contain Michigan State and propel his Crimson Tide teammates to a victory in the College Football Playoff Semifinal at the Goodyear Cotton Bowl Classic.

“He’s a great leader. I love him,” said junior defensive end Jonathan Allen. “He definitely has a love for the game and that drives him to be the best that he can be and help this team in any way he can.”

Everything Robinson does, he does for his teammates, a sense of selflessness that is evident every time he speaks.

“I try to help out as much as I can, and be more verbal out there on the field and in practice just making sure you are accountable for everything you do out there,” Robinson said.

The Alabama coaching staff voted Robinson the Defensive Player of the Week five times this season.

“Everything he does, he does for the team,” said defensive line coach Bo Davis. “He’s really trying to get guys going and motivated and playing at a higher level than they’re used to playing at.”

This sense of responsibility makes every good thing – and bad thing – that happens on the Alabama defense personal to Robinson, who has contributed a lot of good for the Crimson Tide this season. The 2015 consensus All-American, a finalist for the Outland Trophy, contributed 42 tackles, 7.5 tackles for loss and 3.5 sacks this season.

Despite all that success, after every practice this season, Robinson greeted Davis with the same question.

“A’Shawn always asks me, ‘How was practice today?’ because he wants to know what is it that we need to fix and what’s not working,” said Davis. “That’s important to him, so when things don’t go real well or we have a bad day, it’s personal to him.”

This feeling of accountability Robinson has developed has allowed him to step up as a leader for his team this season, not for his own recognition but for the good of the team.

This week, it’s easy to see that Robinson’s family-first mentality has permeated the entire Crimson Tide defense, even so much as convincing senior linebacker Reggie Ragland to come up with a new role for Robinson.

“He’s like the mean grandma that gets everything,” Ragland said with a big laugh, a persona he says he came up with on the spot on Tuesday. “Like, this is my house, and I’m gonna get it done.”

But like with any grandma, Robinson’s teammates know his stern guidance and businesslike intensity isn’t truly mean-spirited, but quite the opposite.

“People think that A’Shawn is this mean, just dirty, don’t care about nobody, don’t have no heart,” Evans said. “But A’Shawn is a teddy bear when it comes to the people he loves.”

Robinson’s caring demeanor and devotion to his team has earned him another line on his resume this season:

Respected leader of the Crimson Tide.

In this position – like his position on the football field – Robinson excels, something his teammates recognize daily.

“He’s a man about his business, and what he says, he does,” Ragland said. “That’s why everybody listens to him. He’s not fake. He’s not pretend. He’s real.”