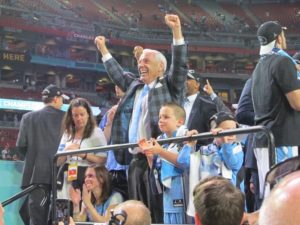 GLENDALE, Ariz. — It was not pretty. At all. The game lacked any flow. The statistics reflected North Carolina’s struggle. The Tar Heels shot 35.6 percent from the field and went 4-for-27 from the 3-point line. At the end of a season in which rebounding became a signature, they were outrebounded, 49-46.

But where they had been heartbreak a year ago, there were tears of joy on Monday night. North Carolina used the resilience and resourcefulness of a veteran team to overcome its shortcomings to defeat Gonzaga, 71-65, for the school’s sixth national championship.

North Carolina (33-7) won its third national championship in the last 13 seasons under Roy Williams, who became the sixth coach in NCAA history to win at least three titles. Williams, who surpassed the two titles won by former Carolina coach Dean Smith, joined John Wooden of UCLA, Mike Krzyzewski of Duke, Adolph Rupp of Kentucky, Jim Calhoun of Connecticut and Bob Knight of Indiana as the only coaches to win at least three championships.

The Tar Heels beat Oregon and Gonzaga by a total of 7 points, the fewest by a national champion since Michigan won its pair of Final Four games by a total of 3 points in 1989.

From that point, the Tar Heels took control of the decisive moments.

“I think we made some huge plays down the stretch,” junior forward Justin Jackson said on the court while sporting his new championship T-shirt and snapback. “Twenty-six for 73, I guarantee you that any other game we woulda lost. But coming down to this game we knew what was on the line, we knew what we needed to do and I’m just happy for these guys.”

With only 1:40 remaining and trailing 65-63, the Tar Heels seemed to find the gear that they had been searching for the entire night. At that moment Jackson finished through contact as he was fouled by Williams-Goss, and the free throw gave the Tar Heels a 66-65 lead that was never lost.

After an Isaiah Hicks jumper extended the lead to three, Meeks blocked Williams-Goss. Joel Berry II, who led the Tar Heels with 22 points and was voted the Most Outstanding Player of the tournament, led Jackson for a breakaway dunk with 12 seconds remaining for a 70-65 lead.

Three seconds later, Meeks made another huge defensive play by pulling the ball away from Gonzaga senior center Przemek Karnowski.

The play marked the end of a frustrating night for Karnowski, who struggled all evening against an aggressive Tar Heels defense. He was held to 9 points on 1-of-8 shooting, with four turnovers.

Meeks, who contributed to the effort that frustrated Karnowski, was all smiles in the locker room after all the confetti had settled.

Berry II struggled for most of the night, missing open jumpers, making 7 of 19 shots and shooting 4-for-8 from the free throw line. But he did not allow himself to get discouraged.

For the first time this season, North Carolina won a game in which it was outrebounded. While the Tar Heels were feeling elation as the final seconds ticked away, the Zags were beginning to feel grief. Gonzaga’s interior presence, which had carried the Bulldogs through an historic season, was negated by Carolina’s aggressive defensive approach. Karnowski finished with more turnovers (four) than field goals (one). Freshman Zach Collins was held to 9 points before he fouled out in only 14 minutes of playing time.

Williams-Goss, Gonzaga’s leading scorer throughout the season, was also held in check for most of the night. Following two possessions in which he posted up Tar Heel guard Nate Britt, Williams switched Jackson on to the 195-pound guard. Jackson’s length caused problems for Williams-Goss for the rest of the night. Jackson was able to keep him away from the basket and even sent back two of his jumpers. Once he was finally able to get a little going in the final few minutes, it was not enough.

He injured his right ankle with 1:25 to go, and while he was able to stay in the game, his missed two jumpers in the last 1:19.

“I don’t think any of us think we played our best game,” Williams-Goss said after the game. “And that hurts.”

“It was their length, it was their physicality, their defensive plan,” Few said. “They did a great job. They won this game with their defense, quite frankly.”

The Tar Heels had often distanced themselves from the crushing end to their season a year ago, when the buzzer-beater by Kris Jenkins won a championship for the Villanova Wildcats.

A year later, the loss to Villanova became a point of reference. Williams was upset at how the Tar Heels finished the first half, and at halftime, he reminded his team what had happened the year before. “We were up five at halftime,” he remembered, “and the other team came out, played harder, and won the game.”

This time, the decisive moments led to a different type of tears.

“At the end, when you’re watching your kids jump around and the excitement, the thrill they have,” Williams said, “there’s no better feeling in the world as a coach.”