A Championship Drive For The Ages 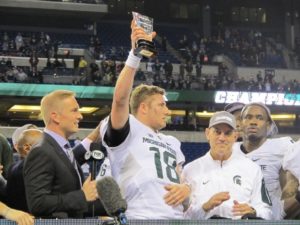 INDIANAPOLIS — On a night when yards were hard to come by, LJ Scott wouldn’t be denied when it mattered most.

Michigan State’s freshman running back powered through two Iowa defenders at the goal line to score the go-ahead touchdown in Saturday’s 16-13 victory over previously undefeated No. 4 Iowa in the Big Ten Football Championship game at Lucas Oil Stadium.

Scott’s 73 yards on 22 carries will forever be remembered for his role in the decisive, championship-clinching, 22-play, 82-yard touchdown drive that spanned 9:04.

Facing a third-and-goal from the Iowa 2-yard line, Scott ran to his right and was initially stopped short of the 1-yard line by Iowa linebacker Cole Fisher and cornerback Desmond King. But Scott suddenly spun to his right, reached forward with the ball in his right hand, and stretched across the goal line for the clinching touchdown with 27 seconds left.

“We knew we had to execute each play,” Scott said. “You know, we knew each play was big and that we had to stay with the ball. I was just trying to make a big play for my brothers. We knew what we had at stake.”

Senior quarterback Connor Cook did not appear to be 100 percent healthy coming off a shoulder injury that forced him to miss the Ohio State game on Nov. 21. Cook had to lean on the running game and his offensive line. The Spartans senior quarterback completed 16 of 32 passes for 191 yards and one interception.

Cook was voted the Grange-Griffin Championship Game MVP for the second time, but deferred to his offensive line.

“There’s no question, anyone who was watching that game, they deserved that award,” Cook said. “For them to come up big like that in the last drive, 22-play drive, 21 were runs….Guys falling down, guys hurt, rotating more guys.  Guy who was just on the sideline, hurt, ends up coming back in.

“They grinded it out, opened up the hole for LJ,” Cook said. “They put the team on their back that last series.” 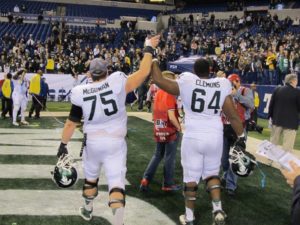 Michigan State and Iowa traded field goals over a mostly forgettable three quarters, but on the first play of the fourth quarter, the Hawkeyes were finally able to cash in.

Iowa quarterback C.J. Beathard hit Tevaun Smith on an 85-yard touchdown to put the Hawkeyes up 13-9 on the Iowa’s longest play from scrimmage this season.

After the teams traded punts, Michigan State got the ball back with 9:31 to play, needing a touchdown, starting at its own 18.

Over the 22-play drive, Scott and the Spartans’ offensive line wore down the Iowa defensive line that had allowed only 46 rush yards in the first half. Michigan State called 14 runs for Scott, which netted 40 yards, but the Iowa defense couldn’t get off the field. The Spartans converted five third downs and one fourth down on the final drive.

“That drive was wearing them down,” said offensive lineman Benny McGowan. “That was Michigan State football, saying we’re going to run the football and we’re going to win this game.”

An apparent first down reception by wide receiver Aaron Burbridge was wiped away on an official review for illegal touching after replay officials ruled his left foot was out of bounds. Cook then hit him for a 16-yard first down catch with 5:32 to play in regulation.

After Cook picked up a 7-yard run on the following play. Scott ran it on the next seven plays to set up a fourth-and-2 from the Iowa 5-yard line.

With a championship and playoff spot at stake, the coach had a question for his quarterback. “I looked at him in the huddle,” Michigan State coach Mark Dantonio remembered. “I said, ‘Can you do this, get it up in there?

Dantonio had heard what he needed to hear. Breaking quickly to his left, Cook was able to pick up just enough to give his team a fresh set of downs.

“Obviously I wasn’t 100 percent,” Cook said. “I got to grit it out being in a situation like this, playing for a championship. You have to go out there and compete.”

Michigan State, who is now 6-1 in games decided by seven points or less, is expected to head to the College Football Playoff National Semifinal in the Orange Bowl or the Cotton Bowl.

Dantonio told his team to reach higher all year, and now the Spartans are two wins away from a national championship.