About Us Museum Studies Blog Blog Curation is A Conversation

Curation is A Conversation

This week we considered  several different tools a curator may use and how important they are to creating an exhibit. We started connecting these tools and their importance in curatorial practice using our readings. Of the two tools that stood out the most in our discussion, one was very familiar and the other was new to all of us: labels and shadow curators.

A reading that resonated with a lot of the class was Ingrid Schaffner’s essay “Wall Text.” Many members of the class agreed that a label is a great tool in curatorial practice. We discussed how labels and wall text are important for interpreting the items or stories being told and leading visitors through a space. Text in museums helps give reason and meaning to visitors’ experiences. The discussion of labels brought us back to previous questions about the intersections and distinctions  between artists and curators. Some students in our class are artists themselves and have written artist statements. This discussion about how artworks and items are perceived through labels resonated with both people from the museum studies program and the fine arts program. Labels are, in a way, a curator talking to their audience, trying to grab the visitor’s attention and share information. In curatorial practice, labels are a way to make connections and lead a visitor through the exhibit.

Another reading that we discussed in the chapter on the “Curator and Shadow Curator” by Nuno Sacramento and Claudia Zeiske from the book “ARTocracy: Art, Informal Space and Social Consequence: A Curatorial Handbook in Collaborative Practice.” In the model they propose, a curator and a shadow curator work as a duo by having shared conversations from the beginning of a project to the end. The role of the shadow curator is to question the curator’s actions. The productive conflict between curator and shadow curator helps make sure that curatorial decisions are intentional. There were a lot of mixed opinions on the idea of a shadow curator. Some liked the approach and connected it to other collaborative methods we had discussed related to  community curating.Others were not so excited about the idea. One person wondered how the position really differed from a “healthy relationship with an assistant curator.” This discussion brought us to questions about authority. Who is in charge? How much power should one curator have? Our discussions on labels and shadow curators show us that curators do not work alone. They are like the glue that connects visitors to the collection. Some might say that without a label, an object is just an object. Labels are like windows into a deeper story. Also, shadow curators are not someone who suppresses ideas but a partner in curating. Shadow curators can be great for expanding ideas by having another viewpoint. A curator can rely on these tools to enhance an exhibit and be a reliable resource in the spread of information.

The second half of our class time was designated for a conversation with Jonathan Square, the curator of Past is Present: Black artists respond to the complicated histories of slavery showing in Herron Galleries from September 28, 2022- January 15, 2023. He began by telling us a little about himself and the show. Dr. Square specializes in Black fashion history. He is currently an assistant professor at Parsons School of Design. 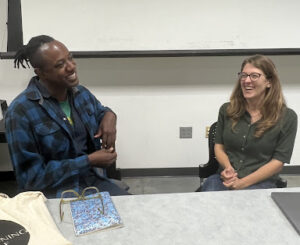 Jonathan Square (left) the curator of Past is Present: Black artists respond to the complicated histories of slavery came to have a discussion with our class.

Dr. Square decided early on that the show should have works from local artists as well as those who are internationally active because it made sense for the location. He also wanted to connect these works to historical objects. While his initial vision was to display artworks and historical documents side-by-side, he ultimately had to display the historical documents separately so they could be shown under the lower light needed to preserve them.

When asked how he became a curator, Jonathan Square said that it had happened by accident. When in school, he had not originally planned to become a curator, but while working at Harvard, an opportunity to create an exhibit came about, and he went for it. He said that he wants to demystify curating. He believes that anyone can be a curator.  we curate every day on Instagram, our bookshelves, and even our friends are curated.

Our discussion with Jonathan Square was very fun and informational. He gave us a lot of insight into what it is like to curate a show and balance emotional topics. He also told us that, for him, curating is a conversation. This idea reinforced much of what we’ve been discussing in class – including the ideas about wall text and shadow curators that we started off the day examining.

Kayla McLean is a first-year MA student in the Museum Studies Program at IUPUI.