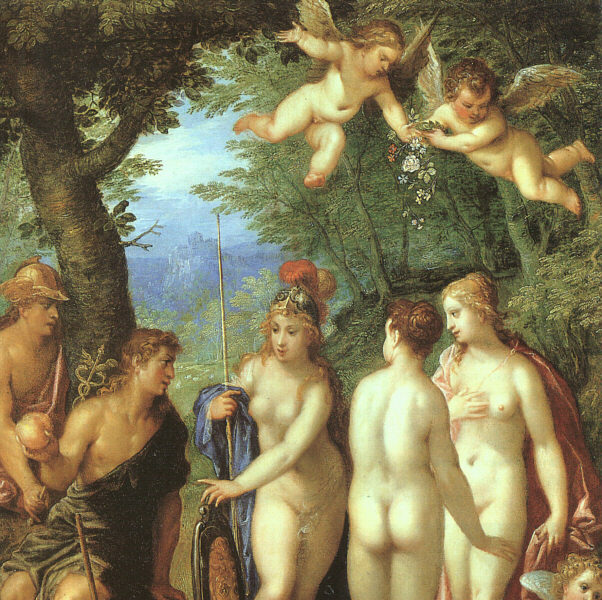 Meeting 2: In which someone tossing an apple escalates quickly, to involve a divine beauty contest, an idiotic shepherd, and a decades-long war.

This episode of Mythology Pitch Meetings brought to you by CLAS-C 205 Classical Mythology.

HOMER, UNCONTESTED G.O.A.T OF ANCIENT POETRY: Do I! This one is about the Judgment of Paris.

CLIO, MUSE OF HISTORY (interrupting): Oh excellent, the French are notoriously judgmental, good to give them some of their own medicine.

HOMER: It’s not that Paris. This Paris is a Prince of Troy, a great ancient city. But the story actually starts at a wedding, where all the gods have gathered. But oh no! They didn’t invite Eris, the goddess of Discord, and she is pissed. So she throws a golden fruit with an inscription saying “For the Fairest” into the middle of the gathering! 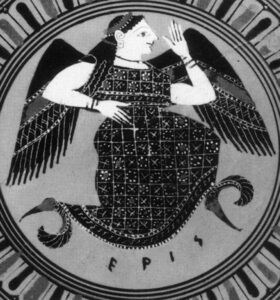 HOMER: So that all the goddesses will fight over it!

CALLIOPE: No, I mean why throw inscribed fruit? That seems like a strange evil plan. Is the fruit rotten? Throwing rotten fruit is a thing.

HOMER: No, it’s golden, and inscribed, and a prize. It’s highly desirable.

CALLIOPE: Just seems like if those were the criteria, she could have thrown a necklace. What kind of fruit is it?

HOMER: I don’t know, there aren’t really that many Ancient Greek words for fruit. Let’s say a pomegranate. Those are always popular.

CALLIOPE: That sounds dangerous to throw, more like a missile. This plot is starting to make more sense.

HOMER: No, the fruit can’t be intrinsically dangerous. It’s something small and beautiful. Something women want.

CALLIOPE: Once again, I think you’re confusing fruit with jewelry. What if the fruit were exotic? Let’s call it an apple.

HOMER: I don’t know what that means.

CLIO: It’s a fruit that grows on trees in Central Asia. It will eventually make it over to the Mediterranean, although it won’t get its own word until centuries after your poetry. In fact, women going crazy for “apples” will become a whole thing. The Catholic Church will base major doctrine on it. Children will bring apples as gifts to their teachers. Who will be women, primarily. The future is weird.

CALLIOPE: Because they are contending for the title of Fairest, and you need wisdom to make fair judgments?

HOMER: It’s not that fairest. Fairest like most beautiful.

CLIO: Just wait until you see how far modern mortals are going to take the white thing for our sculpture.

CALLIOPE: Also, if we’re talking beauty, then why Athena? She’s notoriously virginal and dresses like she fell into an ancient army surplus store. 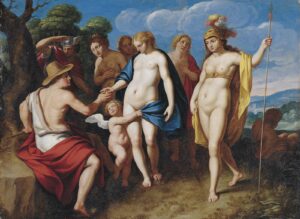 Athena demonstrates one of many reasons that she remained a perpetual virgin.

HOMER: Because I need her for the plot later. Anyway, they want Zeus to act as judge to award the prize, and he’s like “No way, I’m not touching this with a ten-foot pole, and normally I’ll touch anything with my pole.” So he decides to find a mortal to decide the question. He goes with Paris, because Paris is the most beautiful man alive, and also an idiot, so he’ll agree to this sort of thing.

CALLIOPE: Wow, it’s going to be pretty hard for a mere moral to decide between three examples of immortal beauty.

HOMER: Nope, it’s going to be super easy, barely an inconvenience. The goddesses are going to straight up bribe him. Hera, because she’s a queen, offers to make him the most powerful king in the world. And Athena, because she’s the goddess of wisdom, offers to make him the most sought-after wiseman in the world. Which doesn’t make much sense, come to think of it, because Paris is clearly not into kinging. He’s currently taking a gap year to work as a shepherd.

CALLIOPE: Is that something princes can do?

HOMER: Princes of Troy do it, for some reason. That’s how Zeus will meet Ganymede and Aphrodite will meet Anchises. I guess it’s their family tradition? Speaking of Aphrodite, she reads the sheep-pasture better than her competitors, and she offers Paris the most beautiful woman in the world as his companion. So he immediately awards her the apple.

CALLIOPE: Does that resolve the problem?

HOMER: Not in the least. “Resolving the problem” is not going to be a thing in Greek myth, I’ve decided. I’d prefer if any attempt to resolve a problem only makes things so much worse.

CALLIOPE: Sounds promising for sequels and spinoffs. So does Aphrodite introduce Paris to the most beautiful woman in the world? 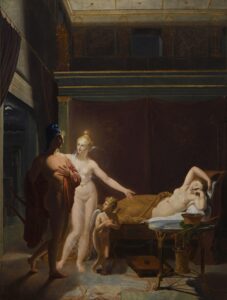 HOMER: Sort of? See, the most beautiful woman is Helen, Queen of Sparta and wife of Menelaus.

HOMER: She absolutely is.

CALLIOPE: Does Aphrodite know that?

HOMER: She absolutely does.

HOMER: She absolutely does not. She helps Paris steal Helen from Menelaus and become Helen of Troy. And then Menelaus and his bros start this big war to get her back. And Hera and Athena are there egging everyone on to burn Troy to the ground, because they’re furious that Paris chose Aphrodite over them.

CALLIOPE: Why aren’t they just mad at Paris? He’s a single mortal who made a mistake, why blame his entire city full of people?

HOMER: Not gonna lie, that is not a distinction most Greek gods seem capable of making. And anyway, this is going to launch a whole 10 year war, where the greatest heroes of all time fight each other and really maximize our chances to expand our IP. What do you think?

CALLIOPE: Well, I think it sounds a little silly to have the greatest war of all ancient time start because of a beauty contest. But if we play our cards right we can stretch this into the Roman period with Augustus. Reboot it from the Trojan perspective in about 700 years.

HOMER: Um, I won’t be around then.

CLIO: No problem, I know this guy Virgil who can take things over.

For more exploits of the Trojan War, and how myths of heroes shaped Ancient Greek and modern societies, enroll in CLAS-C 205 Classical Mythology, coming up as a late-start class in Fall 2022, and earn GEC credits while you’re at it! Or for more adventures with the Trojan War and Helen of Troy, enroll in our 1-credit “appetizer” course CLAS-B 313 Extraordinary Ancient Women, also coming up as late-start Fall 2022 with no pre-reqs! Can’t get enough of Ancient Greece and Rome? Earn a Classics Minor in just 15 credits!