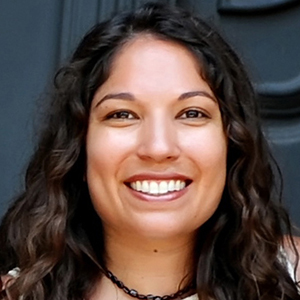 Andrea R. Jain, Ph.D. is professor of religious studies at Indiana University, Indianapolis, editor of the Journal of the American Academy of Religion, and author of Selling Yoga: From Counterculture to Pop Culture (Oxford 2014) and Peace Love Yoga: The Politics of Global Spirituality (Oxford, 2020). She received her doctorate degree in religious studies from Rice University in 2010. Her areas of research include religion and capitalism; global spirituality and modern yoga; gender, sexuality, and religion; and theories of religion.

Jain’s works in progress, including the documentary film “Predation,” call for humanities scholars to center questions about the current pandemic and planetary crisis. The purpose of humanities scholarship, Jain argues, should include the following: to remind scientists and health experts that equity must be at the center of their response to pandemic and planetary crisis; to uncover and analyze the needs for repair in the relationships between human societies and environmental bodies and non-human animals; and to diagnose capitalism’s death-dealing structures and the causes of ecological death in the hope that activists, in turn, can build on that scholarship to imagine radically different futures.

Graduate Certificate in the Study of Women, Gender, and Sexuality, Rice University (2010);

2017. “Yoga, Christians Practicing Yoga, and God: On Theological Compatibility, or Is There a Better Question?” Journal of Hindu-Christian Studies 30.

2012. “The Malleability of Yoga: A Response to Christian and Hindu Opponents of the Popularization of Yoga.” Journal of Hindu-Christian Studies 25: 3-10.

2018. “Yogi Superman, Master Capitalist: Bikram Choudhury and the Religion of Commercial Spirituality.” Being Spiritual but not Religious: Past, Present, and Future(s). Edited by William B. Parsons. New York: Routledge.

Editor, Journal of the American Academy of Religion

Religion and capitalism; global spirituality and modern yoga; gender, sexuality, and religion; and theories of religion.