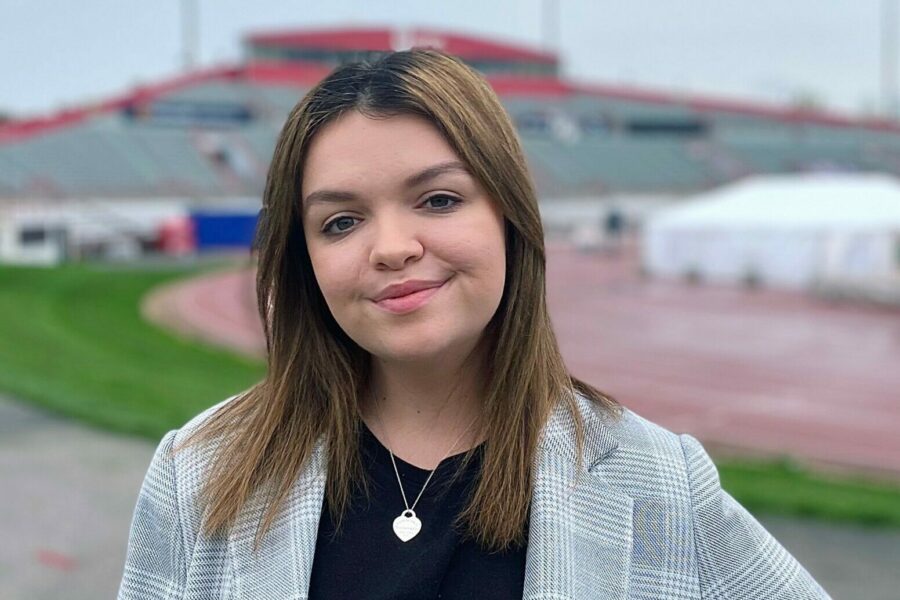 When I was in high school, my family and I often made the hour-and-15-minute drive from Terre Haute to Indianapolis to watch the Indy Eleven professional soccer team play at IUPUI’s Carroll Stadium. Once I became a student at IUPUI, I knew I wanted to do an internship with the team. My senior year, I applied and landed an internship with “the Boys in Blue,” as they’re known, and I knew I wouldn’t find a better fit.

Every spring, summer, and fall, the Indy Eleven front office opens applications for internships in its departments. The process is not a complicated one—after an initial resume and cover letter review, applicants are interviewed by Jordan Mirabile, the Senior Director of Administration and Culture. (Jordan oversees all interns once they begin.) If applicants are chosen to move forward in the process, they interview with the director of their department of interest.

After I was offered and accepted the position in February, I started working in the office in downtown Indy, just blocks away from Circle Centre Mall and Bankers Life Fieldhouse. I felt at home. The communications department, lovingly dubbed the “media cave,” sits just a little farther back than most departments but receives frequent visitors throughout the day. Some people come back to discuss corporate office events, but most come to say hi, make a fresh cup of coffee, and maybe play a couple rounds of GeoGuesser.

My duties in the office varied from day-to-day. During my first month, I conducted interviews with many of the women who make the team run, and then crafted LinkedIn posts for Women’s History Month. I sharpened my interview skills and got more practice with corporate writing style. All of my work was edited by Indy Eleven’s media manager, who took time to help me make my work better and post something I was proud to put my name on.

The interviews did not end in the office. Along with my two supervisors, I was able to conduct a handful of interviews with players about March Madness, personal biographies, and even immigration. I also was able to spend some time away from the computer where I helped at Media Day, assisting with content creation around the new jersey launch for the season.

Another responsibility as a Comms intern happened on game days, which were my favorite events. Some interns prefer crafting game-day previews, which I took a small crack at during pre-season. My game days were spent running a live Twitter feed during the 90-minute match. After games, the media team conducted post-match interviews with players and coaches, which had to be transcribed for the Match Recap to go out within hours of the last whistle. Interviews and editing happened on the field and in the press box, often keeping the Comms department at the stadium long after field clean-up was finished. But my coworkers’ attitudes never made it feel like a drag.

As with all writing and editing, there were some hiccups. I knew little about the professional sports industry or media management coming into the position, but whenever I felt lost, there was always support around me. My supervisors made themselves readily available to answer my questions, as did the entire media team. Coming into a small team felt intimidating at first but by the end of my time at Indy Eleven, I not only felt like I had become a better journalist, I had made life-long connections. I learned real skills and discovered what type of environment I want to spend my time in as I enter the workforce. My time with the team was the perfect end to my college days and I can only hope future Indy Eleven interns enjoy the experience as much as I did.

Bailey Rennick is a May 2021 IUPUI Journalism and Public Relations graduate. In addition to interning at Indy Eleven, Rennick also interned at the Sir David Martin Foundation in Sydney, Australia, while studying abroad.