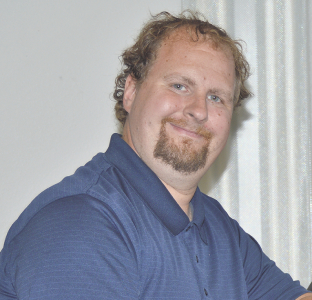 Michael Williams, B.A.J. ‘18, who is currently a student in IUPUI sports journalism graduate program, was hired to write sports at The Graham Leader in Graham, Texas, but the COVID-19 pandemic made him adapt to covering news.

“Since the pandemic started, I’ve turned into a state government reporter to an extent,” said Williams. “I’ve been reporting on how [Texas] Governor [Greg] Abbott’s actions impact the city of Graham.”

When Gov. Abbott released his “Open Texas” report, Williams immediately opened and read it. He has been following every executive order.

“I’ve enjoyed becoming somewhat of an ‘insider’ regarding Texas’ response and reopening,” he said. “I think I’ve surprised some of the local officials with my ability to change hats, so to speak.”

Williams said his most impactful stories have been those regarding the reopening of the local economy. Graham is a small town with less than 9,000 people. The closest major city is an hour away, so the town is dependent on local businesses. The shelter-in-place order hurt the small businesses in town.

He has been able to do some sports stories as well, even though many sports have been cancelled due to the pandemic. Williams said he is proud that the paper only had one edition without a sports section.

“That said, it’s been difficult,” he said.

Williams covers two schools. He tried to find ways to recognize the local senior spring athletes, and decided on a “senior night” series. The idea came from fellow IUPUI Journalism alum Rob Hunt. Senior athletes were able to submit a letter to run in the paper.

He also covered a story about the girls 4×200 track team doing one last run together. The team had been running together since the 7th grade.

“It was an emotional moment that I was proud to be able to capture for them,” Williams said.

And, when a local senior softball duo created their own senior night, they invited Williams to attend.

“I was extremely humbled when they reached out to me personally to take part, not just as a local sportswriter, but as a way to show appreciation for what I have been doing since I arrived in Graham.”