The Communication Studies Speech Competition, formerly named IUPUI’s Speech Night Competition, is a prestigious event that has occurred annually since the 1970s. This competition provides Fundamentals of Speech Communication (COMM R-110) students the opportunity to experience the best principles of oral communication and persuasion in action, highlighting the importance of speaking well and judging wisely. These competitions take place at the end of every fall and spring semester, giving students in R-110 the opportunity to compete with the skills they have gained from their course. This competition has been held in IUPUI’s classrooms, Lecture Halls, Campus Center, and Hine Hall Theatre, as well as the Madame Walker Theatre, the Scottish Rite Cathedral, and the Murat Theatre/Old National Centre.

As a result of the COVID-19 pandemic in 2020-21, the event transitioned to an online platform and was streamed virtually so students could participate safely. Videos of past competitions are available on the Communication Studies Speech Competition playlist. Stages of the Event

There are many sections of R110, totaling hundreds of students. Students representing their sections in the Speech Competition must go through three rigorous stages to narrow down students to the event’s winner and finalists.

The first stage is Quarterfinals, several weeks before finals week and often on a Saturday. Judges (often instructors from R110 or mentors from the Speaker’s Lab) evaluate outlines submitted by students for the competition. Outlines are submitted through the TurnItIn.com writing repository and are assessed for plagiarism. Using a rotational distribution, they are then divided up for judging. Judges rate contestant outlines based on whether the criteria are met for the proper structure, guidelines, and more for their Monroe’s Motivated Sequence speeches (as students were taught in their courses). Based on the plagiarism assessment and the criteria rating, the top speeches are chosen to move forward to Semi-finals. These speeches are sorted into seven different rooms to make sure that each room does not have repeated topics, repeated professors, and that no judges are from the same class as the speaker.

The second stage, Semifinals, is typically held two weeks ahead of Speech Competition Final. Contestants in each of the seven rooms present to an audience of peers and faculty members, all of whom use the same scoring system as Final. Students compete to “win” their room and earn a spot in Final. There is only one winner from each room, and each winner moves on to the final stage.

The third stage, Speech Competition Final, is generally held the Monday before the campus final examinations week. It is attended by everyone enrolled in COMM-R110, friends and family of contestants, and many others from around campus and Indianapolis. Traditionally, a guest critic would provide feedback and inspiration votes (from faculty) were tallied. With greater technological support now, all in attendance use a provided scoring sheet to rank contestants and submit votes. This allows the attending R110 students to utilize the skills they have gained and to consider who utilized the speaking tools and persuasive tactics most effectively with the audience in mind. Audience members who have not taken COMM-R110 are given a peek at the prowess of IUPUI’s students studying communication. When the votes are tallied, the winners are announced live at the end of the event and receive scholarship awards for their efforts. Communication faculty have proudly watched students who participated in the Speech Competition become leaders in business, academics, industry, media, government, and more. They demonstrate expertise in effective oral communication. Many past winners have shared stories of their experiences and of the impact it had on their lives. They have gone on to serve in numerous roles, such as nurses with incredible communication skills; pharmaceutical representatives who help communicate with surgeons to give medications during surgeries; pastors and priests of large churches; IUPUI Commencement Speakers; leaders in corporations; and much more. One speech night winner won the competition, taught R110 six years later, and had students win first place two years in a row! Another winner even met the love of his life in his speech course. The Communication Studies Speech Competition t has left a lasting impression on the winners’ lives, giving them speaking skills they continued to utilize as they progressed in their lives. Their stories continue to inspire students today.

Communication Studies Speech Competition, formerly known as Speech Night contains the best of the best, and the speeches over the years have proven this. Many social dilemmas have threatened Americans since the 1970s, and Speech Competition speeches touch upon many of these topics. The speeches are delivered with Monroe’s Motivated Sequence in a Question of Policy persuasive speech. As brought into R110 from a Purdue researcher, the Monroe’s strategy focuses on identifying a need, satisfaction of it, visualization of the benefits from that plan, and an action step for the audience. This organizational pattern has allowed speakers to address many important issues.

In the 70s, there was a speech on the Electoral College, which was going through serious debate at this time. The 1970s was also an extremely important decade for women, as they fought for equality in a variety of ways. One speech was about “Crime Against Women,” addressing this important concern. There were also many other important topics addressed, including “The Plight of the American Indian,” an issue that was a key topic of identity politics in the 1970s; and “An Oil Well Alternative,” an important topic that was addressed and changed on the federal level due to the 1970s energy crisis.

In the 1980s, speeches covered a variety of important topics, many relating to incarceration methods and those wrongly accused of crime, dangers to children such as parental abuse, child pregnancy, improper nutrition, and child pornography. There were also many speeches on seatbelt safety, the dangers of drunk driving, the dangers of smoking, critiques of public school systems, and cheating within standardized testing systems. Some of these speeches concerned issues that responded to positive social change for example, smoking decreased from the 1980s to today. Similarly, concerns about child abuse and pornography led Congress to enact the Child Sexual Abuse and Pornography Act of 1986 and the Child Abuse Victims’ Rights Act of 1986, this was an echo of speakers’ earlier concerns. Another topic, dangers of travel without seatbelts, was also soon subject to legal address; subsequently, seatbelt requirements and use have risen over the years, likely saving countless lives during motor accidents.

In the 1990s, many speeches addressed important topics of the time. Social Security was addressed with speeches such as “Social Security: How Secure Do You Feel?” and “Social Insecurity,” as it became clear that the Baby Boomer generation would cause drastic changes in the amount of money those born afterward would be able to receive. Illiteracy in America was also addressed many times; late in the decade, the federal government provided money for adult education after the National Institute for Literacy’s formation in 1991. Seatbelts were still an important topic, and their use continued to rise after the 1980s and 1990s. There were also many speeches about STDs and AIDS, which are still problems today, though less stigmatized.

In the early 2000s, some topics addressed in previous years were revisited, such as drinking and driving and the dangers of alcohol, as well as the importance of smoking cessation. There was also the introduction of topics on the dangers of body image in the media as well as the importance of preserving our planet by limiting plastic use and pollution. On September 11, 2001, arguably one of the most tragic events in recent American history occurred with the terrorism that occurred with devastating plane crashes in New York, Pennsylvania, and Washington, D.C. Speeches addressed this topic, explaining the importance of protecting our country and keeping this from occurring in the future. There were also speech topics about freedom in America and working to ensure everyone retained their rights.

In the 2010s, many important issues continued to be brought up. Topics included the importance of inclusion; breaking stereotypes; both sides of the gun control issue; and, honoring and protecting the health of veterans. The importance of teaching about sex education in schools the correct way – in addition to educating and preparing to prevent sexual assault and sex trafficking – were also touched on in speeches. Mental health, an issue rarely discussed in former competitions, was one of the most common topics. From depression, loneliness, eating disorders, and anxiety, the stigmatization of mental illnesses was persuasively discussed with powerful visual aids. Throughout the 2010s, mental health became a more popular and less stigmatized issue – much more freely spoken of on college campuses and in society as a whole.

Speeches in 2020, the first two years of which the competition was held online, touched on a variety of topics despite a world shrouded in a worldwide pandemic. Daily habits became more evident during this time, and some speeches focused on important habits such as money management and getting enough sleep. On a wider scale, the importance of recycling and the need for a new recycling system were touched on, as well as the need for wage equality in the workforce. There were also speeches on incarceration and the importance of only putting the “right” people behind bars. Again, the dangers of human trafficking were addressed, as well as the importance of stopping child abuse in the form of child marriage in the US. There is no doubt that important topics like these will continue to be addressed in future Speech Competitions.

Over the years, there have also been a variety of forms of entertainment at the competition while votes are tallied. IUPUI’s own dance troops and acapella groups have performed for the audience; professors have provided such entertainment as comedy routines or skits. There have also been videos made by the Speaker’s Lab, such as an Office parody video shown during the intermission.

Over the years, many leaders who shaped R110 worked to continue the tradition. Those from various leadership roles – including Jennifer Cochrane, Kate Thedwall, Mike Polites, Stephen LeBeau, Jan DeWester, Jaime Hamilton, Desirae Masterson, Angela Sisson, Ian Sheeler, and Steven Overbey – followed in Dr. Wagener’s footsteps, teaching R110 courses themselves and keeping this competition on its feet. They kept the history intact and allowed this competition to stay alive and well for over 100 competitions.

The Speaker’s Lab also serves a key role in the formation of speech competition event. Student mentors have offered support in various ways, including aiding students in R110 courses, reviewing competition outlines, and shepherding contestants, attendees, and dignitaries engaged in the competition. Mentors have shouldered many responsibilities in support of R110 leadership, ensuring everything runs smoothly for the many involved in this prestigious event. 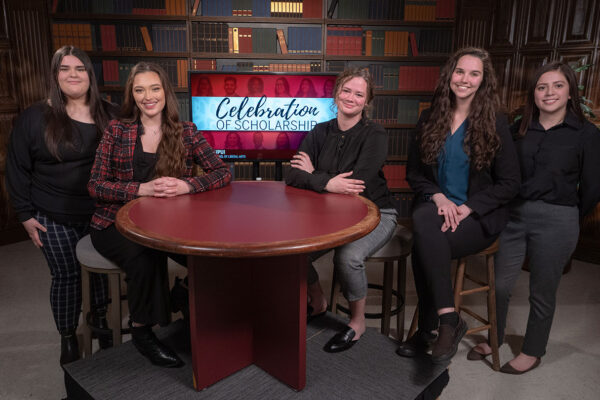 A Student Takeover for the 2022 Celebration of Scholarship!