Donn Albright and the Center for Ray Bradbury Studies: A Foundational Relationship 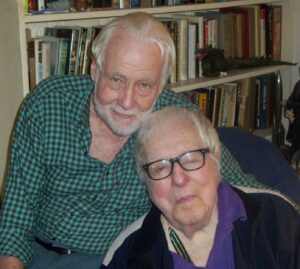 In the late 1980s, long before there was any thought of a Center for Ray Bradbury Studies, Ray Bradbury urged Jon Eller to contact Donn Albright, his long-time friend and principal bibliographer, a professor of illustration at the Pratt Institute. “If you want to learn about my work and life, you must learn from Donn Albright. He knows me better than I know myself.” In the years to come, Donn gave Bradbury books and materials from his collection to Jon Eller and his colleague Bill Touponce, who had become the principal academic-based Bradbury scholars. Donn’s continuing support led to the founding of the Center for Ray Bradbury Studies at IUPUI’s School of Liberal Arts in 2007.

Donn Albright also conceived and edited many special editions of Ray Bradbury’s work, including previously unpublished stories and important Bradbury story adaptations for film and television. He invited Eller and Touponce to contribute to some of these editions, and their ongoing access to Donn’s personal collection resulted in many Bradbury Center publications, including biographies and the creation of a journal, The New Ray Bradbury Review. Donn’s unmatched collection of Bradbury story manuscripts and scarce magazine versions of Bradbury’s earliest stories paved the way for the Center’s Collected Stories volumes, which recovered the seldom-seen earliest versions of Bradbury’s oldest published tales.

Ray Bradbury passed away in June 2012, leaving hundreds of his books and thousands of pages of his manuscripts and related materials to Donn Albright. Donn generously decided to gift most of his bequest to the Bradbury Center, and he was deeply involved in preparing these materials for transport. His example led the Bradbury family to gift their father’s office and a lifetime of his awards and mementos to the Center as well. In June and again in October 2013, Albright, his daughter Elizabeth, and Jon Eller spent weeks in Bradbury’s Los Angeles home organizing, staging, packing, and painstakingly loading these gifts for cross-country transport—more than 18,000 pounds of artifacts. The Albright books and papers constituted more than three-quarters of the combined $6.2 million appraisal. Overnight, the Bradbury Center mission was changed forever. Thanks In large part to Donn Albright, the Center is now one of the larger single-author archives in the nation.

In 2016, the Bradbury Center expanded into a larger archive and museum space on the IUPUI campus. This milestone was celebrated by a Bradbury exhibition in the campus Cultural Arts Gallery, featuring “I Saw It at Ray’s House,” a photographic retrospective by Elizabeth Albright, Ray Bradbury’s goddaughter and a graduate of Pratt, where her father Donn Albright taught for more than fifty years. Her photographs, which capture the magnitude of her father’s gift better than words can convey, are currently preserved in the Bradbury Center as well.

In 1950, at the age of thirteen, Donn Albright discovered Ray Bradbury through radio shows and magazines. By 1952 he was corresponding with the author, and he would always regard Bradbury’s first written response as “a postcard from the future.” As that future unfolded, Bradbury would come to see Albright as his great-hearted golden retriever, and dedicated books to him. The Center for Ray Bradbury Studies would not exist without Donn Albright’s great heart and vision; his 2013 gift to the Center, which forms by far the largest part of our archive, was designated the Bradbury-Albright Collection in his honor.