A comprehensive account of Bradbury’s life in three volumes 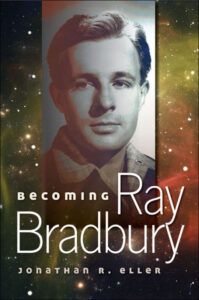 “Becoming Ray Bradbury chronicles the making of an iconic American writer by exploring Ray Bradbury’s childhood and early years of his long life in fiction, film, television, radio, and theater. Jonathan R. Eller measures the impact of the authors, artists, illustrators, and filmmakers who stimulated Bradbury’s imagination throughout his first three decades. Unprecedented access to Bradbury’s personal papers and other private collections provides insight into his emerging talent through his unpublished correspondence, his rare but often insightful notes on writing, and his interactions with those who mentored him during those early years.

Beginning with his childhood in Waukegan, Illinois, and Los Angeles, this biography follows Bradbury’s development from avid reader to maturing author, making a living writing for the genre pulps and mainstream magazines. Eller illuminates the sources of Bradbury’s growing interest in the human mind, the human condition, and the ambiguities of life and death–themes that became increasingly apparent in his early fiction. Bradbury’s correspondence documents his frustrating encounters with the major trade publishing houses and his earliest unpublished reflections on the nature of authorship. Eller traces the sources of Bradbury’s very conscious decisions, following the sudden success of The Martian Chronicles and The Illustrated Man, to voice controversial political statements in his fiction. Eller also elucidates the complex creative motivations that yielded Fahrenheit 451.

Becoming Ray Bradbury reveals Bradbury’s emotional world as it matured through his explorations of cinema and art, his interactions with agents and editors, his reading discoveries, and the invaluable reading suggestions of older writers. These largely unexplored elements of his life pave the way to a deeper understanding of his more public achievements, providing a biography of the mind, the story of Bradbury’s self-education and the emerging sense of authorship at the heart of his boundless creativity.”

Becoming Ray Bradbury at the University of Illinois Press 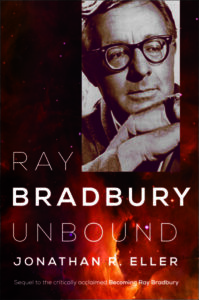 “Fully established in the slick magazines, award-winning, and on the brink of placing Fahrenheit 451 in the American canon, Ray Bradbury entered the autumn of 1953 as a literary figure transcending fantasy and science fiction. In Ray Bradbury Unbound, Jonathan R. Eller continues the story begun in his acclaimed Becoming Ray Bradbury, following the beloved writer’s evolution from a short story master to a multi-media creative force and outspoken visionary.

Drawn into screenwriting by the chance to adapt Moby Dick for film, Bradbury soon established himself in Hollywood’s vast and overlapping film and television empires. The work swallowed up creative energy once devoted to literary pursuits and often left Bradbury frustrated with studio executives.

Yet his successes endowed him with the gravitas to emerge as a much sought after cultural commentator. His passionate advocacy in Life and other media outlets validated the U.S. space program’s mission–a favor repaid when NASA’s astronauts gathered to meet Bradbury during his 1967 visit to Houston. Over time, his public addresses and interviews allowed him to assume the role of a dreamer of futures voicing opinions on technology, the moon landing, and humanity’s ultimate destiny.

Eller draws on many years of interviews with Bradbury as well as an unprecedented access to personal papers and private collections to portray the origins and outcomes of Bradbury’s countless creative endeavors. The result is the definitive story of how a great American author helped shape his times.”

Bradbury Unbound at the University of Illinois Press 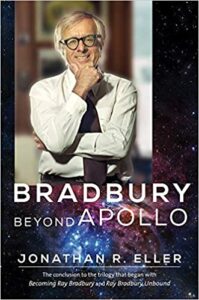 Celebrated storyteller, cultural commentator, friend of astronauts, prophet of the Space Age—by the end of the 1960s, Ray Bradbury had attained a level of fame and success rarely achieved by authors, let alone authors of science fiction and fantasy. He had also embarked on a phase of his career that found him exploring new creative outlets while reinterpreting his classic tales for generations of new fans.

Drawing on numerous interviews with Bradbury and privileged access to personal papers and private collections, Jonathan R. Eller examines the often-overlooked second half of Bradbury’s working life. As Bradbury’s dreams took him into a wider range of nonfiction writing and public lectures, the diminishing time that remained for creative pursuits went toward Hollywood productions like the award-winning series Ray Bradbury Theater. Bradbury developed the Spaceship Earth narration at Disney’s EPCOT Center; appeared everywhere from public television to NASA events to comic conventions; published poetry; and mined past triumphs for stage productions that enjoyed mixed success. Distracted from storytelling as he became more famous, Bradbury nonetheless published innovative experiments in autobiography masked as detective novels, the well-received fantasy The Halloween Tree, and the masterful time travel story “The Toynbee Convector.” Yet his embrace of celebrity was often at odds with his passion for writing, and the resulting tension continuously pulled at his sense of self.

The revelatory conclusion to the acclaimed three-part biography, Bradbury Beyond Apollo tells the story of an inexhaustible creative force seeking new frontiers.

Bradbury Beyond Apollo at the University of Illinois Press