The SLAte Book Disability, Intimacy, and the End of the Asylum

Disability, Intimacy, and the End of the Asylum 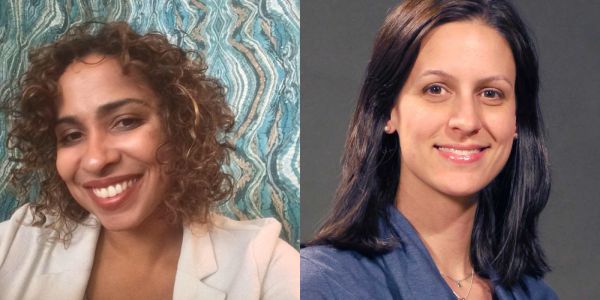 by Elizabeth Nelson and Emily Beckman

Widely remembered as sites of abuse, isolation, and neglect, many state-run psychiatric hospitals and homes for the disabled were shuttered across the United States in the late 20th century. Indiana’s Central State Hospital (1848-1994) came to a particularly tragic end, after a series of preventable patient deaths in the early 1990s prompted Governor Evan Bayh to close the state’s flagship mental institution. 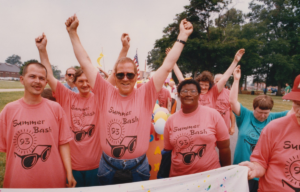 Given the gloomy reputation of such facilities, we were surprised by patients’ perspectives on the final years of Central State Hospital (CSH), as revealed in a newsletter created by the patients themselves. The DDU Review (1986-1993), a monthly publication, reads like a high school newspaper, with features on classes, meals in the cafeteria, celebrations, field trips, and group exercise to Richard Simmons videotapes. The DDU Review itself was the product of a “newspaper club,” one of the many rehabilitative programs offered to patients with mental illness and intellectual disabilities on the Dual Diagnosis Unit.

How do we reconcile the intimacy and community revealed in the pages of the DDU Review with the severe maltreatment of patients at CSH? This question drives our book  project, Disability, Intimacy, and the End of the Asylum, which reassesses deinstitutionalization through a disability studies lens. By privileging the stories of patients with intellectual disabilities and non-medical staff, we delve into the complexities of care in psychiatric hospitals and the impact of deinstitutionalization on disabled individuals. 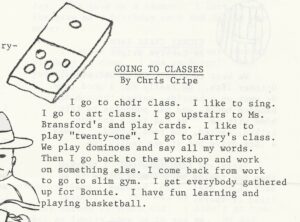 Image: “Going to Classes.” This article was written and illustrated by a patient in the Dual Diagnosis Unit and published in the October 1991 issue of the monthly newsletter, the DDU Review.

Through our analysis of the DDU Review, we find that patients’ lives were not dominated by interactions with doctors and nurses, as we might have expected. Rather, patients’ experiences were shaped largely by rehabilitation staff, such as recreation, speech, and vocational therapists. Rehabilitation programs often served to enforce behavioral norms; they were what philosopher Michel Foucault might have called “technologies of the self,” tools for improving individuals’ attitudes and conduct. Beyond being forms of disciplinary control, these programs also provided fertile terrain for patients, with the help of staff, to claim their rights and freedoms. These included the right to participate in the political process through voting, to engage in consensual sexual relationships, and to smoke cigarettes—a key feature of patient life. By studying the quotidian lives of residents, we find an unexpected site of analysis into the themes of self-expression, sexuality, health, labor, advocacy, and citizenship, the very issues at the heart of the disability rights movement in the 1980s and 1990s. The dynamic relationships, social interactions, and therapeutic programming that characterized the Dual Diagnosis Unit were interrupted by the 1994 closure of CSH.[1]

The deaths of two Black women with intellectual disabilities in 1991 set off the chain of events that resulted in the governor’s decision to close the hospital. Our examination of these deaths reveals deadly structural problems at the hospital’s foundation that have not been recognized, including medical racism, ableism, and sexual violence. This structural analysis provides new perspectives for understanding the dynamics of violence and neglect inside institutions, and their connections to care practices and staff hierarchies in the hospital. Staff who had the closest relationships with residents were often held responsible for abuses uncovered in official investigations.

State officials concluded that the patients would be better served by being reintegrated into the community, a decision aligned with nationwide deinstitutionalization policy during the final decades of the twentieth century. Both patients and staff were displaced to other state-run facilities and group homes during the closing process from 1992-1994. The transition left a lasting impact on those involved, particularly the staff, and interviews conducted between 2017-2019 suggest deep layers of guilt and nostalgia. Many continue to commemorate their experience at CSH by maintaining close relationships established there and attending annual staff reunions.

Unlike assessments of deinstitutionalization that focus on top-down policies, our narrative approach considers the hospital’s closure as it unfolded in time, according to those who were there, revealing the traumas and the joys underlying the history of a progressive mental health reform.

[1] For more on the DDU Review and patient-staff relationships at Central State Hospital, see Emily Beckman, Elizabeth Nelson, and Modupe Labode, “Voices from the Newspaper Club: Patient Life at a State Psychiatric Hospital (1988-1992),” Journal of Medical Humanities (May 2020), Online: