For a young urban commuter campus in a very red state, establishing a Women’s, Gender, and Sexuality Studies (WGSS) Program at IUPUI in the 1970’s, seemed unlikely. However, inspired by dedicated faculty and staff, the Women’s Studies Program was nonetheless established, helping to create an environment in which scholars and students could grow in our understanding of women and gender. Dr. Kathleen Klein was named the first Director of Women’s Studies at IUPUI in 1979 after the Program was approved by the Faculty Assembly of the School of Liberal Arts. Dr. Anne Donchin later took on the position in 1983. Donchin once observed that since [Women’s Studies] WOST “borrows” its faculty from other departments and schools, “students and faculty crisscross the entire [IUPUI] campus.” This continues to be true today and is a strength of the Program, imbuing it with diverse, expansive expertise. 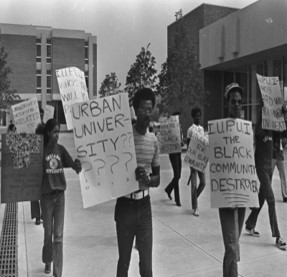 The Program continued to evolve in 2018, when Women’s Studies changed its name to Women’s, Gender, and Sexuality Studies (WGSS) to better reflect growing academic offerings. The WGSS Program collaborates with the Individualized Major Program to provide majors for WGSS students, with several students pursuing that option each year. Another unique facet of the IUPUI WGSS program is its chapter of the National Women’s, and Gender, Honor Society, Iota Iota Iota (Triota).