About Us University Writing Center Blog Alumni From the UWC to the NYT: An Alumni Consultant Spotlight with Sarah Bahr

From the UWC to the NYT: An Alumni Consultant Spotlight with Sarah Bahr 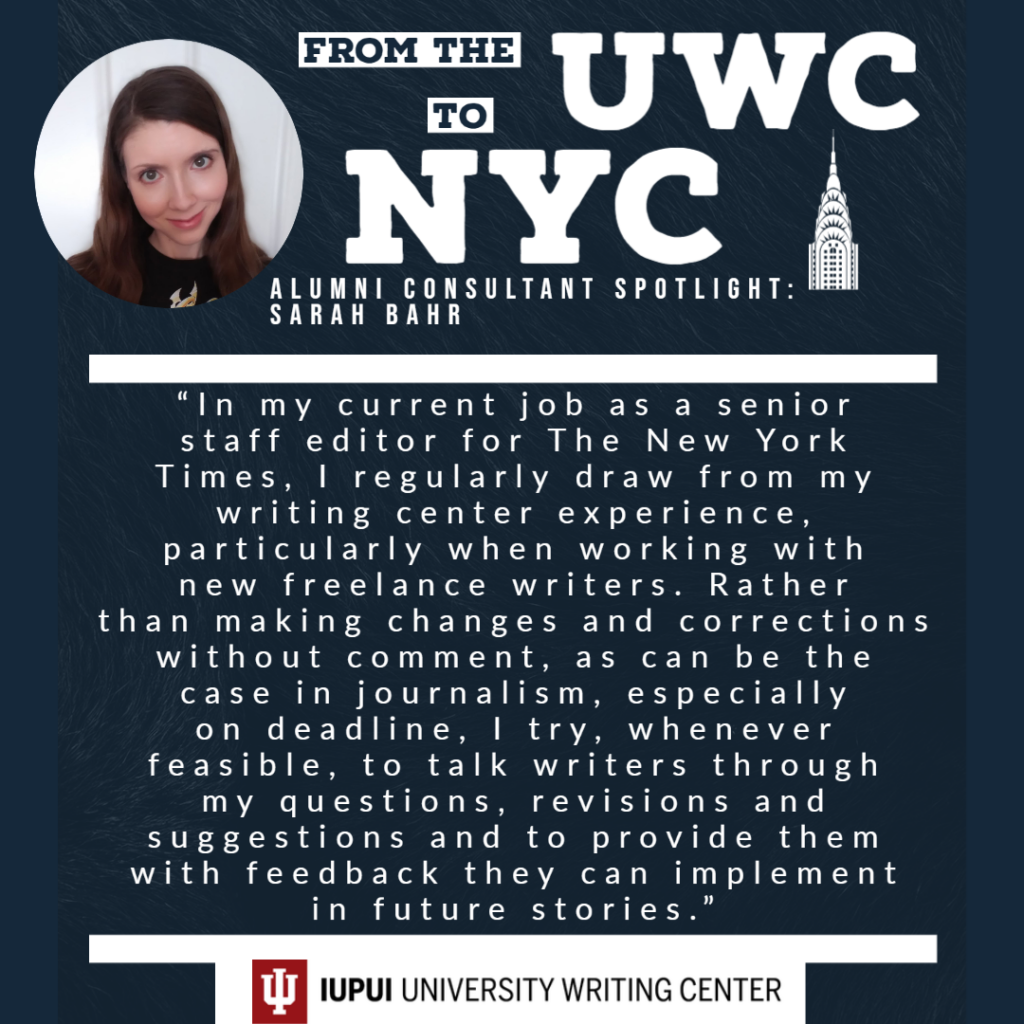 As we near the end of another semester (and face the bittersweet reality of impending graduations!), we’re pausing to allow past and graduating consultants a chance to reflect on their experiences and time in the University Writing Center. In this post we’re so proud to be featuring alumni consultant Sarah Bahr, who’s work you’ve likely read before in the New York Times. She’s interviewed celebrities and eaten her way around the city at the Culture Desk, written on the climate crisis and gerrymandering, used her writing center background to discuss the writing process with reporters, and now she has been hired as a full-time Senior Staff Editor on the Flex Desk. Congratulations, Sarah!

Even though she’s in the middle of permanently moving from Indy to NYC, she took a few moments to reflect on her time spent in the UWC as an undergraduate writing consultant, which she describes as a “fun” and “knowledgeable” community.

1. What are the things you’ll miss about the UWC?

Sarah: The camaraderie and discussions with colleagues who are similarly passionate about the intricacies of the writing process, as well as the satisfaction of knowing I helped a student reach a “lightbulb moment” that afforded them deeper understanding of a concept.

2. How would you describe your work at the UWC?

Sarah: Fulfilling, for sure. And it was, of course, great training in being flexible, as someone might list one concern in the appointment memo – or not list anything at all – but may, in fact, want feedback on something entirely different. I never knew what, exactly, would be asked of me in a session, so it was, just like the writing process, an experience of figuring it out in real time.

3. What do you value most about the UWC?

Sarah: Everyone on staff was committed to doing their best to help writers. If they didn’t know an answer to a question, rather than giving a writer a “that’s probably true” or an “I think so” response, they would use all available resources, whether human, digital or print, to figure it out authoritatively. That is, no one was there just to earn a paycheck; all the consultants cared about accuracy, empathy and writer comprehension in sessions.

4. How do your future professional and personal goals connect to skills and values that are related to your time at the UWC?

Sarah: In my current job as a senior staff editor for The New York Times, I regularly draw from my writing center experience, particularly when working with new freelance writers. Rather than making changes and corrections without comment, as can be the case in journalism, especially on deadline, I try, whenever feasible, to talk writers through my questions, revisions and suggestions and to provide them with feedback they can implement in future stories. I know how frustrating it can be as a freelance writer to just have stories published without any feedback, and that it isn’t helpful to my growth as a writer, so I try to always engage with writers beyond just doing a line edit. Every story at the New York Times goes through at least two edits before it publishes, and the first edit is a big-picture, conceptual look at a story that addresses aspects like content, structure and sourcing. It’s ideally a conversation with a writer very similar to a UWC session (not always possible with deadlines, but features generally work this way!).

5. How were you given opportunities to grow at the UWC?

Sarah: The #WritersOfIUPUI project I did during my junior year at IUPUI was a great learning experience for me. I asked writers to stay a few minutes after sessions to talk through their experiences with writing, their backgrounds, and generally who they were as people, conversations which I turned into short stories that I published on the UWC’s social media accounts with a photo. It was a great way to show people that the UWC wasn’t just for freshmen, or for ESL students, or a remedial option, but to showcase the breadth of writers that sought feedback, from working professionals in graduate school to poets, novelists and community organizers. I talked to people with a diverse range of life experiences, including many students from other countries, who often had fascinating insights about what writing instruction looked like there, and how expectations for work were similar to or different from those in the United States.

Are you interested in learning more about the UWC and becoming a consultant? Learn more on our website here and enroll in the Fall 2022 ENG-W396/597 Writing Center Theory & Practice course today!