It was the second week of December, and all my papers were due. As is common for many of my fellow English majors, I had put off nearly all of them. I mean sure I had worked on them in the previous weeks… but not nearly as much as I should have.

So I found myself bundled up on my couch during finals week, getting cozy with my laptop and spending hours and hours writing, rewriting, and writing some more.

I do homework on my living room couch at home because the dining room table is not comfortable and I have yet to buy a desk so I used the Netflix Fireplace to keep me company and feign warmth as I worked. 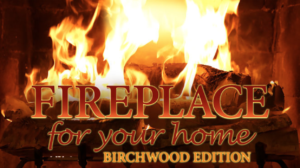 The faux fireplace got old, though, and I I found myself longing for some other kind of white noise to use in its place. Thankfully, Netflix’s “Because you watched…” came in handy; Netflix recommended Chill With Bob Ross — a series of Bob Ross instructional painting videos of Wintery scenes.

I don’t even want to admit how many Bob Ross videos I watched in that week – what I do want to admit, though, is how incredibly encouraging Mr. Ross was while I worked on my papers. In his calm lulling voice, he would explain that I could put a mountain (or a tree or a lake or anything else) in my world because  there were no rules. He would tell me to be brave and place the tree right where I want it and watch it come out of my paintbrush. He told me to “just have a good time” and not to concern myself with mistakes because “we just have happy accidents.”

While I was watching and listening to all his calming advice, I realized that so much of what Bob Ross does is what we do in the University Writing Center. Mr. Ross said in a few of the videos that he’s not painting so that people will copy him but so he can show the different possibilities there are with painting. In the same way, consultants aren’t here to telling writers what to write, but rather to talk with them about different choices they can make while writing.

Bob says that you can put a tree wherever you want, just like we’ll say you can have as many body paragraphs as you want. Bob also explains why he puts a cabin where he does – maybe it’s on the right side of the canvas because it looks like it fits under the trees he painted there earlier; in a session a consultant might explain that they would personally decide to put their thesis at the end of their introduction rather than the beginning.

I guess what I’m saying is that, at the Writing Center, we’re really here to encourage writers, not dictate what their writing should be like. Bob Ross said it best about painting and it applies to writing too: “It’s totally and completely up to you. . . That’s what’s so fantastic about painting – each and every person will paint differently and that’s what makes it special.  If we all painted the same way what a boring time it would be. . . but because people are different, paintings are different. That’s the beauty of it. That’s what makes it very special.”