About Us History of the UWC

History of the UWC

In 1982 the North Central Association of Colleges and Schools recommended establishing a writing center at IUPUI. In response, Jim East, Director of Weekend College, and Barbara Cambridge established the IUPUI University Writing Center (UWC), which opened in 1983. Staffed by associate faculty in English and one or two student tutors, its services included one-to-one sessions with writers, a grammar hotline, and writing across the curriculum (WAC) efforts in the form of workshops and outreach to academic departments. Throughout the 1980s, the UWC’s staff offered 30-minute writing consultations to undergraduates, largely enrolled in the Writing Program.

In 1990, Barbara Cambridge wrote a grant that supported the development of a Writing Fellows Program, which would provide formal writing center education for undergraduate tutors. Former Director Tere Molinder Hogue and Robin Kares designed the program, which included the writing center education course ENG-W396: Writing Fellows Seminar. The UWC became a site of collaboration among faculty and undergraduate writing consultants. In the late 1990s, the UWC experimented with satellite centers in University College and Ball Residence Hall. During that time WAC efforts were curtailed due to a lack of funding, and the Grammar Hotline was discontinued. In 2007, the University Library established a Learning Commons, inviting the UWC to share a generous space. Around that time, the UWC responded to contemporary writing center research by switching from the title tutor to consultant to better reflect the collaborative and supportive nature of the UWC’s programming.

In June 2010, former Associate Director Lynn Jettpace launched the UWC’s online consulting program. Drawing on online teaching experience, she developed a synchronous consulting approach to support writers unable to attend in-person sessions and worked with writers in France, Afghanistan, and all over the US. While many consultants were involved with online consulting over the years, it wasn’t until 2018 that all UWC consultants began to conduct online sessions.

In 2012, the UWC hosted the East Central Writing Centers Association conference with the theme of “It’s the End of the World As We Know It: Negotiating Change in the Writing Center Context.” The call for proposals stated, “The Mayan calendar predicts the world will end in 2012. Writing center work is full of endings and new beginnings. Sessions end, semesters end, only to be replaced by something new. Sessions may consider ways you cope with change in your writing center.” Muriel Harris was the keynote speaker.

Following an external review in 2013, the UWC moved to 45-minute one-to-one sessions and launched a search for a tenure-track director. In 2015, current Director Dr. Marilee Brooks-Gillies was hired as the first tenure-track director of the UWC. Since then, she has been focused on clearly articulating the UWC’s mission and goals, stabilizing the UWC administrative structure, and enhancing professional development and scholarly opportunities for undergraduate and graduate consultants and promoting antiracist and decolonial pedagogies. The UWC now supports a committee structure in which consultants create, revise, and maintain programming including assessment, research, workshops, and social media. In addition, undergraduate and graduate consultants frequently present their research at regional, national, and international writing center and writing studies conferences and are encouraged to publish. In 2019, Assistant Director Kelin Hull joined the UWC administrative team after completing her MA in English at IUPUI; her MA thesis Wayward Stories explores connections among writing center administration, emotion, and community. After successfully negotiating the challenges of the ongoing COVID-19 pandemic, however, the Director and Assistant Director decided to pursue other research and career interests.

Fortunately, former Associate Director Lynn Jettpace agreed to serve as interim Director beginning fall 2022. Together with interim Assistant Director Dr. April Witt and the amazing staff trained by the former administrators, the UWC continues to serve the needs of the diverse community of writers at IUPUI. 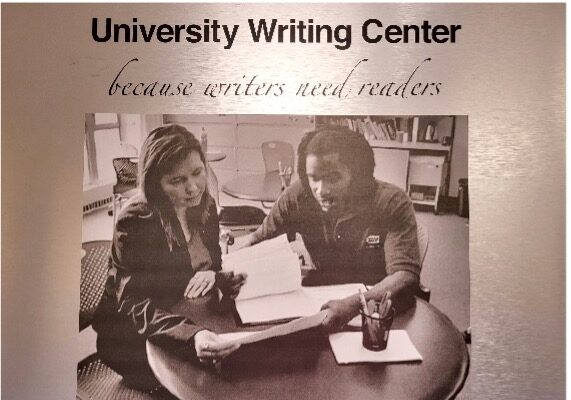