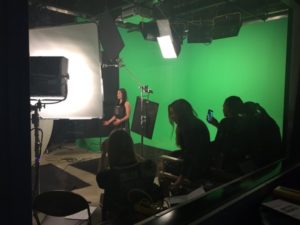 INDIANAPOLIS – Washington head coach Mike Neighbors took a minute to be serious. His answer came out of the blue given the course of the day, but it was real and unique.

While other coaches and players responded that their goal is to win the national championship, Neighbors said there is no goal for Washington this weekend.

“We haven’t had a goal all year long,” Neighbors said. “If we just set a goal just to make the NCAA Tournament or be a Sweet 16 [team], we could have relaxed. But, we don’t have goals, so we’re just going to continue to take what comes next.”

Ahead of the Women’s Final Four semifinals on Sunday night, each team’s head coach and starters rotated through rooms on the first floor of NCAA headquarters on Friday morning and afternoon. They did on-camera and radio interviews with ESPN, and video shoots for online, social media and the video board at Bankers Life Fieldhouse, which will host the three games.

For four hours, players and coaches had the chance to be loose after arriving in Indianapolis on Thursday. And it was a chance for the players, in full uniforms, to show they’re just like other college kids, which seems to get lost as college sports continue to become more commercialized. 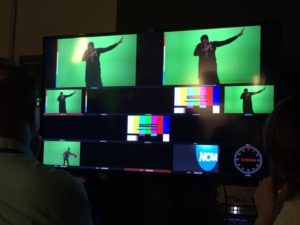 The action took place in the green room at the end of a first-floor hallway. Players and coaches showed their personalities by sharing their go-to dance moves – the Dab was a popular choice – and acting out their favorite emojis.

Speaking of emojis, who knew Connecticut coach Geno Auriemma wasn’t a fan of them? Six of his players gathered around him to explain the different emojis, only for him to then decide that emojis are “dumb.”

Where else would you hear that the trend or fad Washington’s Katie Collier would bring back are bell bottoms? That Auriemma thought someone needed to bring back the cigarette pack rolled up in one’s shirt sleeve? Or that Connecticut’s Breanna Stewart wanted to bring back Pokémon cards? She grew up collecting the cards and had a whole binder of them including her favorites, Pikachu and Squirtle.

And how else would you know that Washington’s Talia Walton has seen every Walking Dead episode? Or that Stewart’s weapon of choice to survive a zombie apocalypse would be a flamethrower?

These aren’t things you’re going to hear coaches and players address in a press conference. Friday was simply an opportunity for them to express themselves and enjoy being at the Final Four.

It was also in the green room where players held a basketball while filming a video board intro where they said their name and thanked fans for supporting their respective teams. Many players then tried to dribble the ball, which they quickly found out didn’t bounce. No, it’s wasn’t some April Fools’ Day prank, although the timing would have been perfect. It was just a prop ball. And it didn’t help that they tried to bounce the ball on a carpet.

In a meeting room outfitted with black sheets to block out light, players and coaches reluctantly parted with their phones to film tease clips. Those shoots included players and coaches nodding their heads, crossing their arms and shouting their respective team chants – like “We are Orange nation!” or “We are the Orange!” – for in-stadium, digital and social media use by the NCAA.

It was during one of those two-to-three-minute sessions where Neighbors provided his response about Washington not setting goals. The questions here were slightly more serious than in the green room but likely not as serious as those posed during the ESPN interviews – which were off-limits to non-ESPN media members and personnel – with Kevin Negandhi, Bob Holtzman, Doris Burke and others. 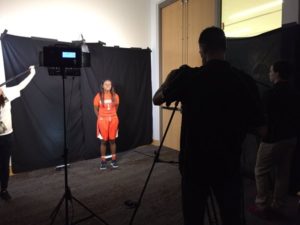 Junior Alexis Peterson described the Syracuse program as “tough and gritty.” Washington’s Chantel Osahor revealed she has to listen to “Buttons” by The Pussycat Dolls and “Work” by Rihanna before each game. And Walton contested she was the best singer on Washington.

When the fun ended, it was time to return to work. Connecticut, the first team to finish, headed over to practice. It was 1:05 p.m. The Huskies were 10 minutes behind schedule. The green room was just too much fun to leave.