Virginia knocking on the door of the Final Four

CHICAGO – When Tony Bennett took the head coaching position at Virginia in 2009, the Cavaliers had finished 10th and 11th in the Atlantic Coast Conference in their two previous seasons. Seven years later, Bennett has the Wahoos knocking on the door of the Final Four, a stage in the tournament not reached by the program since 1984.

Bennett has an actual door knocker that hangs on the locker room wall at every game. It even travels to road games. Players and coaches knock it on their way out onto the floor before every game. It’s a tradition Bennett brought over with him from his last coaching stop at Washington State. 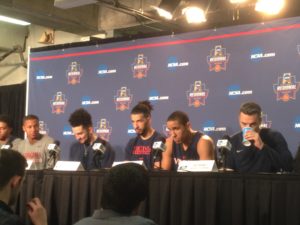 Senior leader and ACC Player of the Year Malcolm Brogdon described the tradition as representing the team’s need to continue pushing on no matter the circumstance.

Bennett elaborated on the metaphor during Saturday’s press conference.

“Sometimes the door gets slammed in your face, sometimes maybe you open it an inch or you get your foot in the door or your shoulder,” Bennett said. “But all we’re in charge of is continuing to knock and maybe we can get that foot in the door.”

The metaphors “chipping away” or “knocking on the door” are in no way new to the sports world, but they’re fitting for what Virginia is trying to accomplish in this tournament and for what Bennett has been trying to build for years in Charlottesville.

In his first two seasons at Virginia, Bennett’s teams won a total of 31 games. Since that time, his teams have won at least 22 games in each of the past five seasons including winning 30 games and the conference regular-season title in both the 2013-2014 and 2014-2015 seasons. Once again this season, Bennett has the Cavaliers (29-7) knocking on the door of reaching the 30-win mark.

This five-year run of success is unprecedented at Virginia. This season Bennett became the first coach in school history to guide the team to five consecutive winning ACC seasons.

When Bennett took over this reclamation project in 2009, he was no stranger to a rebuild. He had seen his father, Dick Bennett, do it at Wisconsin and Washington State, where Tony Bennett worked as an assistant and eventually became his dad’s successor.

“I think what it taught me is how diligent you have to be, and no matter what people are saying on the outside, you have to know what matters to you and stay with it,” Bennett said.

Bennett has done a lot of winning since coming to Virginia, but it isn’t the only thing that matters to him in terms of building a program.

Bennett instills in his players five pillars: passion, humility, unity, servanthood and thankfulness. He strives to have these core principles guide his teams on and off the court. He inherited the philosophy from his father who created the structure from biblical teachings and used it for decades with his teams.

As he sits on the verge of his first regional final, Bennett has built much of what he set out to construct at Virginia. He’s established a program that wins and one that stands on the five pillars of faith.

But Virginia hasn’t met every goal. After all, players and coaches are still knocking that door knocker before every game.

The program has yet to climb to the highest tier of prestige in the ACC. They’re still chasing the North Carolinas and Dukes of the world. Bennett is yet to reach the level of other coaching icons currently residing in the ACC. Mike Krzyzewski, Roy Williams and Jim Boeheim – Bennett’s opponent on Sunday night – all come to mind.

Bennett and his Virginia Cavaliers will have the chance to take the next step – to knock down the door – Sunday night against Boeheim and Syracuse.

“You hope to get chances to go against them and have a chance at, we always say, title fights, to get in those situations and go toe to toe with the best,” Bennett said.

The Midwest Regional is set for Sunday evening at 6:09 p.m. (central time) between top-seeded Virginia and No. 10 seed Syracuse. Whether or not the Cavaliers reach their first Final Four of the Bennett era this year, there’s no doubt they’ll just keep knocking next season.