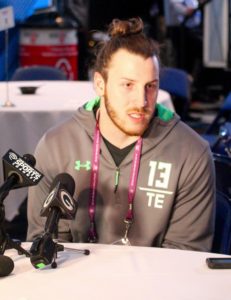 INDIANAPOLIS–When David Morgan II was recruited to join the University of Texas at San Antonio football team in 2011, the team had never played a game. The possibility of football at UTSA didn’t even become a reality until 2009, and the following two years were spent building the program. The Roadrunners finally did play the inaugural game on Sept. 3, 2011. Morgan had one reception for 63 yards against Northeastern State in that contest, the longest catch and run of his season.

Growing up 90 minutes from San Antonio in the small town of Marble Falls, Morgan played wide receiver at Marble Falls High School. There, he became a 4A all-state and first-team all-district selection. He made the switch to tight end after graduation.

Morgan played for four years at UTSA under Larry Coker, who had won a national championship as head coach of the University of Miami Hurricanes in 2001. Morgan had fond memories of the program’s founder.

“Great guy,” he said, smiling. “First time I met him, I loved him. The minute I walked in the door, he said I reminded him of Jeremy Shockey. It was nice to hear someone compare you to a great player like that.”

After redshirting the 2012 season due to a leg injury, Morgan worked his way back into the offense as a sophomore. It was not until his senior season that Morgan began to turn heads. He had 45 receptions for 566 yards last year and scored five touchdowns. He was named to USA Today’s second-team unit to become the school’s first-ever All-American.

“He was a great contributor for us at UTSA,” former coach Larry Coker said by email. “Any team would be lucky to have him.  He has tremendous upside.  He has a fantastic work ethic and is a team player.  He also has a high quality character.”

Now, after invitations to the East-West Shrine Game and the National Football League Scouting Combine, Morgan is trying to become the first player in UTSA’s short history to hear his name called on draft day.

“You always dream of it, and you always think of it when you’re young,” he said. “… Years of hard work paid off. It’s kind of now or never.”

He doesn’t concern himself with the small school image on a big stage.

“That’s something I can’t control,” he said. “UTSA is UTSA. We played Arizona. We played Oklahoma State. We played Kansas State. I feel like people tend to overlook that.”

Still, Morgan admits that there are some coaches who probably haven’t seen a lot of his film. They might not know he’s representing UTSA, and that’s something he wants to change this week.

“Just getting my name out on this platform,” he said, “and just letting people know who I am.”

When asked what he can offer a team, Morgan said it was versatility. In his four years at UTSA, he said he played about 96 percent of the snaps in the no-huddle offense. The ability to play any position is something Morgan hopes will help him in the evaluation process.

It’s that versatility that makes Morgan hopeful that he will hear his name on NFL Draft weekend. If that moment arrives, he would have a great deal of gratitude for the school that has helped him get to this level.

“Looking back at something like that and starting a program, it still blows my mind,” Morgan said. “Twenty, 30, 40 years down the road, knowing I was one of the guys who kind of pioneered that, that will be very special to me.”