CHICAGO — On July 20, a live shot of USA Basketball practice on NBA TV captured head coach Mike Krzyzewski cursing Kyrie Irving. The recently crowned NBA champion interrupted an inbound drill by laughing at the way his coach ran coming off a pick. The internet took the video and ran.

Thursday, Raptors guard DeMar DeRozan laughed at how some people took the incident as Krzyzewski being angry at Irving. He explained how the pair of calmly dropped epithets were in good fun between two guys who’ve developed a strong relationship despite two brief stints together: at Duke in 2011 and during the 2014 FIBA World Cup.

Team USA assistant Tom Thibodeau backed up the explanation, saying it was loving in nature yet semi-serious. Despite being a first-time Olympian and the second-youngest player on Team USA at 24, Kyrie is the key in an offense that runs through the point guard.

“Obviously, as a point guard, he’s an extension of Coach K on the floor so their communication is vital,” Thibodeau said. “Kyrie has to help sell the vision to the team, and that position is critical because it’s the position that unites and inspires a team.”

Irving’s coming off an NBA championship season with the Cleveland Cavaliers in which he drained what proved to be the title-winning shot over Golden State’s Steph Curry in Game 7.

“He’s not afraid of the moment,” Krzyzewski, who will be coaching in his final Olympics, said Thursday at the United Center.

Irving’s ball handling and leadership will be necessary on a roster that lacks point-guard depth after players like Curry, Chris Paul, Russell Westbrook and Damian Lillard dropped out. He has struggled while adjusting to the slick and slippery basketball (which is different than the NBA basketball), but Krzyzewski still gushed over Irving’s offensive game.

“I think he’s the best layup finisher from a guard of anybody in the world,” Krzyzewski said. “His ability to handle and finish in traffic is very unique.”

The guard had few chances to make such memorable shots when he played for Krzyzewski at Duke in 2010-11. During that one-year stint, Irving played in 11 games before a right big toe injury sidelined him for the rest of the season. He declared for the draft, and the Cavaliers took the point guard No. 1 overall in 2011.

“It was kind of a missed opportunity for that program because had he been there to finish the season or maybe another year he could have really been something very special,” said Jerry Colangelo, USA Basketball Chairman and National Team Managing Director. “He was recruited, did attend and so as you look at their relationship it’s more than someone being here for a month. There’s some real roots, some depth to the relationship.”

Irving and Krzyzewski teamed up again at the 2014 FIBA World Cup. The future NBA champion showed off his improvements as he earned the tournament MVP award after scoring 26 points in the Gold Medal game.

“He took over that game and made a hard game into an easy game. He has that kind of ability,” Team USA assistant coach Jim Boeheim said Thursday. “Not a lot of point guards can take over a game like he can shooting or driving. So, it’s good to have him on this team.” 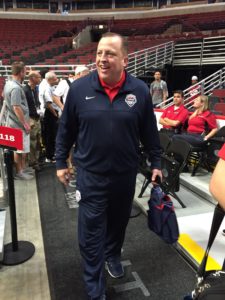 Chicago Bulls guard Jimmy Butler will play his first game in Chicago since the end of the season when Team USA takes on Venezuela at 8 p.m. CT on Friday.

The last time Butler played in the United Center, his Bulls looked quite a bit different. Since then, they’ve traded Derrick Rose, let Joakim Noah leave in free agency, and signed Rajon Rondo and Dwyane Wade.

“I don’t move guys,” Butler said in addressing his supposed diva reputation around the league. “Just like I always say, people are going to think what they want to think. I know where I stand. I know who I am, and it’s just one more thing for somebody to talk about, but it’s OK. I don’t read much into it.”

Also returning to the United Center on Thursday was Thibodeau, a Team USA assistant coach. The first-year Minnesota Timberwolves coach led the Bulls from 2010 to 2015, coaching Butler for four years since he was drafted in 2011.

“Obviously, the time that we spent together, to see how much he’s grown from his first year in the league to what he’s become, it’s a testament to how hard he’s worked, his intelligence, his drive,” Thibodeau said. “Each year he’s gotten better. His makeup will allow him to continue to improve each year.”

Indiana star Paul George was the feel-good story of the USA Basketball team, but a minor injury caused some to hold their breath.

George suffered a left calf strain in Team USA’s exhibition game against China on Tuesday. He scored six points, grabbed two rebounds and added one assist and one block in 10 minutes.

Sitting on the baseline Thursday, George said there’s a 50 percent chance he plays against Venezuela. He was one of the last players to start practicing during drills.

Irving said he was happy to see George return to form since breaking his right leg in an August 2014 scrimmage ahead of the 2014 FIBA World Championships. The Pacers star was named to the All-NBA third team in 2016.

“Things that challenge us in our lives have a way of shaping us, shaping our character,” Irving said. “Seeing him come back and really doing what he does and having an even deeper appreciation for a lot of things that are around him, not just the game of basketball, is great to see.”