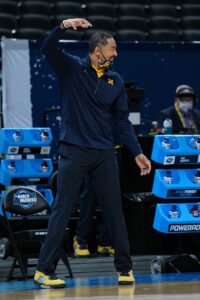 INDIANAPOLIS — In a moment with 4:45 left in the first half of the Sweet 16 matchup between No. 1 seed Michigan and No. 4 Florida State, Wolverine big man Franz Wagner found freshman center Hunter Dickinson on a beautifully dialed up pick-and-roll that left Dickinson open in the paint, where he slammed in a dunk. Wagner was excited, the team energized, as the Wolverines built a 6-0 run that extended their unexpected lead to 13.

Unselfishness has been the embodiment of the Wolverines’ NCAA Tournament run. Michigan defeated the Seminoles 76-58 to advance to the program’s 15th Elite 8, the fourth since 2013. Michigan (23-4) will meet No. 11 seed UCLA on Tuesday night at Lucas Oil Stadium for the East Regional championship.

Despite the absence of senior forward Isaiah Livers, who was officially ruled out for the remainder of the season prior to the start of the game, the Wolverines are playing inspired basketball. Individual offensive contributions have been unpredictable, yet consistent. The team is playing for each other, something that radiates from the presence of head coach Juwan Howard.

“Our guys band together like brothers, be there for their brother, they lift them up and keep their spirits,” Howard said. “It’s great to see that other guys have stepped up, and it’s been collectively as a group where guys have stepped up with his absence.”

In their first-round matchup versus Texas Southern, guard Mike Smith took charge of the offense, racking up 18 points, five assists, and four rebounds. In the second round, seniors Eli Brooks and Chaundee Brown Jr. picked up 21 points apiece in route to an 86-78 victory over No. 8 LSU. In their matchup today, it ended up being Brandon Johns Jr. and Franz Wagner who made a difference, combing for 27 points, 16 rebounds, seven assists, two steals, and one block.

“I think we’ve seen all season that we have multiple guys that can score a lot of points,” Wagner said. “They’re great shooters from the outside and a threat offensively.”

The size advantage favored Florida State, who entered the matchup ranking fifth in the nation in blocks with 5.1 per game. The Seminoles were one of the best defensive teams in the nation, ranking 15th in opponent shooting percentage, allowing 39.3%. With Michigan being one of the most efficient scoring teams (21st nationally at 48%), the clash seemed intriguing.

But the Wolverines shot 49% and outscored Florida State in the paint, 50-28.

“We did a really good job of preparing for it,” Howard said of the Seminoles’ size. “You cannot duplicate it in practice because you just don’t have that Florida State roster. But it was great to know…When it came to preparation, I was just so proud of how the scout team really bought in to preparing us.”

Both teams struggled shooting the ball in the first half, with each team making 33% of its shots. Michigan’s activity on the defensive end helped the Wolverines build a 32-21 lead. The Wolverines were able to force 10 turnovers that led to 16 points. Another contributing factor was foul trouble. The Seminoles racked up 10 fouls, which allowed Michigan to make eight of 11 attempts at the line. Florida State did not make a 3-point basket in the half.

“I think our Achilles was that we were 0-for-7 from the three, which is we had a couple games where we have shot the ball poorly, and we turned the ball over, I think, ten times in the first half,” Florida State head coach Leonard Hamilton said.

The second half became an offensive surge by the Wolverines. They went 18-for-26 (69%) and forced four more turnovers. There was not a dominant individual offensive force. It was team ball. Eight different players scored in the half, fueling a team total of 19 assists. In the second half, Michigan had 15 assists on 18 field goals. The Wolverines are now averaging 20 assists per game in their three NCAA tournament games.

“I think we made some good plays that really put us in good positions out there,” Wagner said. “I mean…we basically knew how they were going to play us all game with fronting the post and switching everything. So we kind of knew what to expect and did that in practice.”

Michigan’s victory allowed the Wolverines to maintain their lead for the most NCAA Tournament wins since 2013 with 21. Gonzaga’s win leaves the Bulldogs close behind with 20.

Michigan and Gonzaga, the top-seeded teams in the East and West regions, are one victory away from a meeting in a national semifinal next Saturday.

“Michigan has had a lot of success in the basketball program,” Howard said. “It’s just beautiful to see that all the hard work is paying off this year.”