The stress of seeding the College Football Playoff

Editor’s Note: Jonathan Sauber, a graduate assistant in the Department of Journalism and Public Relations, was the chair of the inaugural College Football Playoff mock selection exercise for student journalists. IUPUI is the only school that has had students serve as voting members of mock exercises of the College Football Playoff and the NCAA men’s basketball tournament.

The tension in the room was mounting as Bill Hancock, executive director of the College Football Playoff, quietly told us, “I think it’s time to vote.” We were about to make the most important decision of the day.

I felt confident as each committee member cast a vote on laptops with the College Football Playoff logo. I knew the room would see the light.

That fast-paced Oregon and its high-powered offense was deserving of a fictional playoff spot over Florida and Georgia teams that relied on their stingy defenses.

I cast my ballot with a sense of excitement and waited as my fellow committee members submitted their votes. I glanced at one of my fellow members who helped me fight for Oregon, and we shared a confident smile.

Soon enough, we were proven right. Oregon had slid in as our four seed, just ahead of the Gators and Bulldogs. I exhaled after what felt like a victory and took a sip of my coffee to keep my mind ready.

This was just the beginning of an intense day of debating the top 25 teams in college football.

The College Football Playoff was hosting its first mock selection committee for student journalists. We were tucked away in a quiet corner of the Gaylord Texan Resort, not far from the Dallas-Fort Worth Airport, in the same room as the official committee uses. When the assignments were determined during an orientation dinner, I became the chairman.

After a quick breakfast Tuesday morning, it was time to begin.

“Alright, Mr. Chairman, let’s round them up,” Hancock said to me. I rose from my seat and walked into the committee room, as my fellow members followed.

As we entered the room, we passed a hat rack adorned with plain white hats, a reminder to leave our allegiances at the door.

The meeting began with an explanation of the process. We received binders full of team profiles and information to help us build our top 25. We had the committee’s website at our disposal, with its myriad of statistics to help us make our decisions throughout the day. 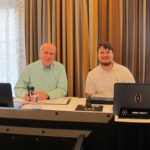 The first step in the process was to submit the 30 teams we chose from the 2012 college football season, the next-to-last season under the old Bowl Championship Series format. This was done anonymously and generated a pool of 37 teams.

We then chose six of those 30 teams. The six teams with the most votes became our first six up for discussion. With our top teams displayed on monitors throughout the room, we went to work.

We had to choose three of those six to become our top three teams in the country, and the first three seeds in the College Football Playoff.

The discussion began where most discussions of college football’s elite begin, with Alabama. That year the Tide had gone 12-1 and looked like the best team in the country. However, in their way was a Notre Dame team that finished 12-0.

So how, then, could Alabama be ranked higher? It was simple. We did our jobs as a committee. The mission statement states that the committee’s task will be to select the best teams, rank the teams for inclusion in the playoff and select other bowl games and then assign the teams to sites.

After quite a bit of debate, we cast our anonymous digital votes, with Alabama coming out on top despite its loss.

The collective decision represented the epitome of the committee’s work. Any usual polling system would likely have Notre Dame at the top because of its unblemished record.

Our job was to find the best team in college football and place it at number one. While record is an important part of that evaluation, we were able to look past that and determine our top team with a much deeper dive into the numbers.

The process continued with three more teams being introduced to our pool, bringing it back up to six. From those six we would then choose teams four through six. This repeated until we had our top nine teams.

Hancock reminded us, as we were about to decide the fourth through sixth teams in the country, that this was our most important vote, the one that would decide the last team to make the four-team semifinal. 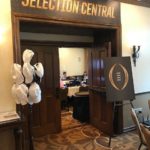 The white hats at the entrance remind committee members to leave their allegiances outside the room.

After the top nine, five teams would be added and we would choose four. That process would be repeated until we had compiled our top 25 teams in the country.

It was during these sessions that I unsuccessfully battled for 8-5 Wisconsin to be the highest-ranked Big Ten team. After all, the Badgers were the Big Ten champions and had won eight games, only one less than Nebraska, the conference’s highest-ranked team.

After the playoff matchups were set, the other four bowls were filled. The Orange Bowl, because they have a contract not related to the College Football Playoff, is able to take their preference of teams. With three bowls left, we placed our three automatic qualifiers (two conference champions and the top group of five team) and the next three highest-ranked teams. Florida and Florida State would go to the Orange Bowl. Georgia and Kansas State were assigned to the Peach Bowl. Texas A&M and Northern Illinois would go to the Fiesta Bowl. And LSU and Wisconsin were sent to the Cotton Bowl.

Once everything was set, the process calls for the committee members to take the next step, one that we did not complete.

They grill the chairman.

They fire off questions about the rankings and the bowl placement, putting pressure on the chair and making him defend the rankings. The process prepares the chair for the media segment of the selection show, and allows the committee members to defend themselves from the inevitable criticisms.

My Oregon debate was the moment I realized the difficulty of the selection process. I was fighting for a team I felt deserved a shot at a national championship.

If my argument had failed, an entire university community would lose a chance at an opportunity the players, coaches and fans felt they deserved, and I would have felt culpable.

That is exactly what the College Football Playoff committee is about. The members go through every bit of information they can find to be as accurate and fair as possible.

I was able to sleep soundly that night, knowing I had won the argument. Even if I hadn’t, this was a fictional playoff, with no residual effect felt by anyone.

For the real committee members, there are real implications to what they do and the decisions they make in that room this weekend. Passionate fans across the country will be furious with them, whether it’s right or wrong.

They’ll receive criticism across the country no matter what decision they make. Either way, the committee will meet again the following fall, in the same room, to do it all again.

They’ll sit down and make the same difficult decisions, with new members and an entire new set of teams and variables to consider.

And college football will be much better off because of their work.