The Road Ends Here: Who’s Going Home and Who’s Moving on at the 2017 Final Four 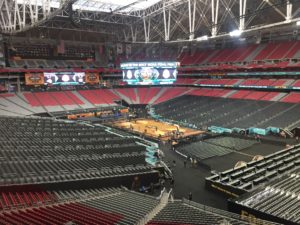 The Bulldogs have swapped with North Carolina all season as the best team in college basketball. Gonzaga has everything to win tonight; elite shooting, dominant post presence, and one of the best defenses in the country. Everything hinges, however, on the ability of 7-1 senior Przemek Karnowski to get control in the paint and draw fouls. South Carolina sophomore forward Chris Silva is especially prone to foul trouble (fouling out 10 of 36 games this season), and he’ll have an enormous challenge stopping the enormous Karnowski without sending him to the free throw line. If Gonzaga can limit or eliminate Silva, who is averaging 13 points and 7.6 rebounds per game in the NCAA tournament, the Bulldogs will be free to move the ball in and out and penetrate South Carolina’s suffocating defense.

South Carolina must rely even more on the defensive side and force Gonzaga to turn the ball over. The Gamecocks have forced 68 turnovers in the first four games of the tournament, the most in that span in 10 years. While the team is on a shocking offensive hot streak, by its standards, South Carolina should expect the scales to tip back in this game. Senior Sindarius Thornwell will likely continue his elite-level scoring, but head coach Frank Martin knows the difference making points will be in transition off turnovers. Defense is what got them there, and defense is what will have to carry the Gamecocks through.

This won’t be close. South Carolina has been a wonderful story and reaching its first Final Four could propel the program to once unimaginable heights. But as the signs say, The Road Ends Here. Expect Gonzaga to dominant the glass, with forward Johnathan Williams continuing to be the Zags’ most efficient player in the tournament. If Williams and Karnowski can spread the floor and create more open shots for guards Nigel Williams-Goss and Jordan Matthews, South Carolina will be unable to rely on forcing turnovers and will have to create points in its half- court offense. The Gamecocks have yet to face a defense as dominant as Gonzaga this season, and the Bulldogs will easily control all scorers not named Thornwell.

Oregon needs to continue to protect the rim the way the Ducks did in their Elite Eight victory over Kansas. Junior forward Jordan Bell sent back eight Kansas shots and affected several others while wreaking havoc in Kansas City, Mo. He will need to avoid foul trouble due to the limited amount of front court depth after the season-ending injury to senior forward Chris Boucher in the Pac-12 tournament. Team rebounding will also be important to limit North Carolina’s number one-ranked offensive rebounding ability. The Ducks will also need Mr. March, sophomore guard Tyler Dorsey, and junior forward Dillon Brooks, the Pac-12 Player of the Year,to continue to pace the Oregon’s 3-point excellence. The Ducks have hit 38 shots from downtown at a 36.5-percent clip in the first four tournament games.

North Carolina needs to control the paint by scoring down low as well as crashing the offensive glass after misses. The Tar Heels have outscored opponents by 14.2 points per game in the paint this season, and with Bell representing Oregon’s only low post presence, this trend could continue. Bell has only been called for four personal fouls over Oregon’s previous five games, so North Carolina will need to try to get him in foul trouble to force less experienced players into big-game action. The strength of Joel Berry II’s ankles will also come into play. Friday afternoon Berry II claimed he was at 85 percent and had no struggles moving laterally. If he or Justin Jackson get hot early, North Carolina will be a tough team to beat.

Ultimately, North Carolina’s dominance inside will be too much for the Ducks. The combination of senior Kennedy Meeks, sophomore Luke Maye, and junior Justin Jackson will be too much for Oregon to handle with its thin front line. The Ducks will also have a tougher time getting good 3-point looks against a long, athletic Tar Heels squad. Dorsey will have a tough time extending his streak of consecutive 20-point games. Expect his field goal percentage, which has been 62.1 over the previous five games, to drop off. Meeks will ultimately have an impressive outing crashing the offensive glass and North Carolina will have more than its season average of 15.7 offensive rebounds. Jackson will lead the way and have another strong performance against one of the nation’s top players in Dillon Brooks, just as he did against Kentucky’s Malik Monk.