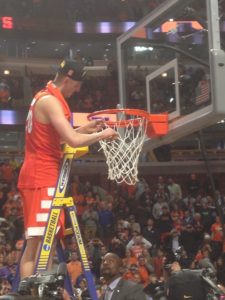 Syracuse’s Tyler Lydon cuts down the net after the Orange pulled off an improbable comeback to down 1-seed Virginia on March 27 in Chicago and earn a trip to the Final Four.

CHICAGO – With 10:02 left in the second half of the NCAA Midwest Regional Final, Virginia sophomore guard Darius Thompson nailed a three-pointer to give Virginia a 51-37 lead. The Cavaliers were in total command of the game.

This was not the first time the Orange were behind and doubted this season. The team was certainly down when head coach Jim Boeheim missed the first nine Atlantic Coast Conference games due to suspension resulting from NCAA violations. The Orange were down after starting conference play with a record of 0-4. And Syracuse was down by nine points in the second half to Gonzaga on Friday night. Each time, Boeheim’s team responded.

Now, with his team down 14, it was time for Boeheim to make his move.

Syracuse’s pressing defense, a strategy that helped the Orange make their unlikely trip to the Elite Eight, created one of the most unexpected and remarkable achievements in the history of the program: a 68-62 comeback victory that sent Syracuse to the Final Four.

The Orange (23-13), the fourth double-digit team to advance to the national semifinals, will face North Carolina on Saturday night at NRG Stadium in Houston.

“We had prepared (the team) that we’re going to press because we weren’t going to cut a 15-point lead against Virginia down by playing half-court,” Boeheim said. “The best we could hope for is to lose the game by seven, six or seven, if we play well.”

After two free throws by senior Michael Gbinije cut the lead to 12, Boeheim gave the order and Syracuse unleashed its full-court press.

Fifteen seconds later, London Perrantes buried a long three-pointer, his sixth of the night, to push the lead back out to 15. A majority Syracuse crowd in the United Center fell quiet, apparently resigned to its team’s fate. Little did the fans know they were about to witness one of Boeheim’s greatest comebacks.

First, there was a travel by senior Virginia forward Anthony Gill. Next, there was a steal by Gbinije. Now, Virginia, an experienced team that had been so steady all season with its deliberate pace, was looking shaky up against the Syracuse pressure.

Then, with 7:12 remaining and the lead trimmed to nine, freshman Malachi Richardson nailed a step-back 3-pointer from the top of the key to cut Virginia’s lead to six.

Following an errant inbound pass by Perrantes, freshman Tyler Lydon, with a hand in his face, poured in another triple.

The “Let’s go, Orange” chant was deafening. Boeheim and his press had the Syracuse faithful believing again.

The two fearless 3-point shots from a pair of freshmen would trigger a 15-0 run that left the Cavaliers trailing 64-58 with 3:27 to play.

Richardson and Lydon, freshmen who made the comeback possible, could barely recall the run in the dressing room after the game. It was a blur.

“It just seems like everything’s clicking in that moment,” said Lydon, who had five blocked shots for a total of 11 in the two regional games and 18 in the tournament. “It seems like five minutes takes 10 seconds. It’s just going so fast.”

Richardson, who was voted Most Outstanding Player, agreed. “When we started to press, I want to say there was maybe 10, 12 minutes left, the next thing I know it’s two minutes left,” he said.

After four Syracuse made free throws and one 3-point attempt from ACC Player of the Year Malcolm Brogdon that rattled out, the whirlwind was over.

The 47 points Syracuse scored in the second half were the most tallied by any team in a half this season against Virginia, the nation’s third-ranked scoring defense.

The next thing Lydon knew, he was cutting down the United Center’s nets, and Richardson was being summoned over to press row by TBS analyst Reggie Miller for a congratulatory embrace.

Miller, once a specialist in late game heroics himself, saw Richardson put on an incredible second-half display. The freshman scored 17 of his career-high 23 points in the final 20 minutes.

“I didn’t care how many points I scored,” Richardson said. “I just wanted to help out.”

Richardson’s second half helped give Syracuse its sixth Final Four appearance and its second in four years.

“It was a great comeback, one of the best I’ve coached in, (for) any team I’ve had,” Boeheim said in the post-game conference. “Virginia has beaten us (by) 15 points three straight times, and they were 15 points up today. They’re a hard team to come back against, and these guys just made some unbelievable plays.”