CHICAGO ⎯ Syracuse was leading Gonzaga 61-60 in the final moments of a Midwest regional semifinal Friday night as the Orange defended against the possibility of a season-ending basket. Gonzaga senior forward Kyle Wiltjer passed the ball to freshman guard Josh Perkins with 4.7 seconds remaining. Perkins blew past his defender at the 3-point line with 4.2 seconds left and launched a floater from the free-throw line with 3.6 seconds remaining.

Syracuse’s freshman forward Tyler Lydon emphatically blocked the shot with 1.6 seconds left. Lydon was fouled and his two free throws helped seal the 63-60 victory that advanced the Orange to a regional championship game for the 10th time. When the last-second 60-foot heave by Gonzaga sophomore Domantas Sabonis fell well short of the basket, an improbable 15-3 Syracuse run over the last 6 minutes, 30 seconds was complete. 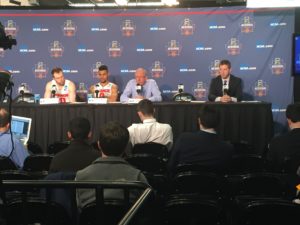 (Left to right) Syracuse Trevor Cooney, Michael Gbonije and Jim Boeheim address the media after their win over Gonzaga

Syracuse (21-14) will meet Virginia in one of two all-Atlantic Coast Conference regional championship games on Sunday. The winner will meet North Carolina or Notre Dame, the East regional finalists, in a national semifinal game next Saturday at Houston.

Immediately, Lydon’s final block took its place with one of the most important moments in Syracuse basketball history, Hakim Warrick’s block of a 3-point attempt by Michael Lee of Kansas to preserve the 81-78 Orange victory in the 2003 national championship game.

“Yeah, it’s a little ways behind the first one,” Boeheim said and smiled. “Hakim would not appreciate me saying anything about that one.”

Lydon’s game-saving block was his sixth of the game. In the history of NCAA regional tournaments, only nine players have been credited with more blocks in a game. During the regular season, Lydon averaged 1.6 blocks per game. But in the three tournament victories including this game he had one block against Dayton, six against Middle Tennessee and six on Friday night for an average of  4.3.

Boeheim said the block was the result of an unusual level of anticipation for a freshman. “That’s a tough play to make,” he said.

“We seen that they were trying to drive and get the ball in the middle,” freshman guard Malachi Richardson said. “We collapsed and Perkins ended up driving, I cut off the first shot and made him drive into our center and Tyler blocked it; something he’s been doing all year.”

Wiltjer had 23 points, shot 52.9 percent from the field and 57 percent from the 3-point line. Sabonis finished with 19 points, 17 rebounds and five blocked shots. But the rest of the Bulldogs, who have been forced to deal with limited depth throughout the season, scored just 18 points and shot 7-for-26 from the field.

Syracuse’s stifling 2-3-zone collapsed on the Bulldogs players all night, which forced them into mistakes. During the season, Gonzaga averaged 11 turnovers per game, but Syracuse’s zone forced Gonzaga to commit 17 turnovers. The Orange turned those turnovers into 21 points. As a team Syracuse stole the ball nine times from the Bulldogs.

Syracuse’s kept Gonzaga from doing what the Bulldogs do best, score in the paint. During the season, Gonzaga averaged 33.7 points in down low. In their two tournament victories, Gonzaga had averaged 35 points in the paint. However, Syracuse held them to just 24 points, which was the fourth-lowest point total this season for the Bulldogs.

Syracuse tough defense and blocked shot gave them the chance to go back to the Elite Eight with a chance to earn the school’s sixth trip to the Final Four. The Orange last played in a regional final three years ago, when the No. 4-seeded Orange defeated No.3 Marquette, 55-39.