PHOENIX — When Derrick Henry’s Alabama teammates attempt to describe what makes him so special, their responses often mention that his actions speak louder than his words. The confidence displayed during Henry’s Heisman Trophy season comes from the strong inner belief he has in himself and his ability to run the football between the tackles as well as, if not better, than anyone in the country. 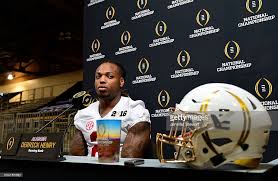 Back in October, with the Tide down by one point to Tennessee during the fourth quarter of a highly-contested home matchup, Alabama senior right tackle Dominic Jackson remembered patting Henry on the chest before the final two plays of their last drive. As Jackson recalled, he didn’t do it as a wakeup call, but rather to just get some reassurance that Henry was ready to do his thing.

What followed was almost better than any words Henry could have spoken.

“I remember when I patted him on the chest, he just turned his head to me and winked his right eye,” said Jackson. “I knew at that moment that we weren’t getting anything less than six on that drive.”

From the Tennessee 19-yard line all the way to the end zone, Henry made his presence felt. First, he picked up five punishing yards on second down, setting up the ensuing first down from the 14 yard line. On the final play of the drive, Jackson remembers knowing immediately that Henry had a chance to score.

“When he got the ball, I remember thinking that if he could get outside to the left he could very well get in,” he said. “Luckily for us he did, because that was a tough game, for sure, and we got the win because of it.”

Henry’s 1,986 rushing yards set a single-season Southeastern Conference rushing record. He scored 23 touchdowns in his first full season as a starting running back. But when senior center Ryan Kelly, one of the three other permanent Alabama captains, was asked what it was like to share the honor of the captaincy with a Heisman winner, the game of football had little to do with Kelly’s response.

“Derrick’s a great guy,” said Kelly. “The great thing about him is that away from the field, he’s one of the nicest guys you’ll ever meet. He really cares a lot for the people in his life.”

Kelly echoed the sentiments of so many other Alabama teammates by pointing to the swagger Henry displays, even though he is one of the more quiet guys on the team.

“For whatever reason, guys just seem to follow his lead,” Kelly said. “He does have kind of that cocky demeanor, but it’s that demeanor that gives the people around him more belief.”

Alabama’s offensive line received the inaugural Joe Moore Award as the best offensive line unit in the nation. Kelly won the Rimington Trophy as the most outstanding center in the country. Kelly reaffirmed how vital it was to have a player the quality of Henry in the backfield, knowing that all the hard work put into creating the holes would be well worth it.

“We know when he is back there, he’s going to do everything he can to make this team successful,” Kelly said. “I wouldn’t want to win with anyone else.”

With defenses usually going all out in their attempts to limit Henry’s impact this season, Coker experienced the kind of season that Alabama was seeking from its starting quarterback. In the last 10 games, Coker completed 73.1 percent of his passes for 1,703 yards, nine touchdowns and four interceptions. 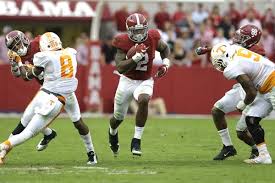 Derrick Henry scores the winning touchdown against Tennessee in October.

In Henry, Coker sees a teammate that is supremely comfortable with who he is.

“The guy never slows down,” said Coker. “Throughout the game he’s the same guy from start to finish. The guys around him seem to change sometimes, but he just seems to stay the same. It’s just incredible.”

“It’s really great to have a guy that has had so much success, but still just wants to do whatever is best for the team,” Coker said. “He’s team first.”

Even with all of the recognition that has come Henry’s way this season, he still pointed to his offensive line as the biggest reason for why he was able to be so effective.

“They’ve meant a lot to me,” said Henry. “I credit all of my success this season to them because without them I wouldn’t have achieved all of the accolades that I did. I give them all of the credit.”

The lessons learned from getting the opportunity to play alongside Henry will not soon escape the mind of sophomore left tackle Cam Robinson.

“He’s really helped me grow up,” said Robinson. “I won’t forget it.”