INDIANAPOLIS—National Football League players have been known to use their platforms to spread awareness about social issues. This week, at the NFL Scouting Combine, it has happened at least twice.

Earlier this week, Elliott posted a tweet showing two pairs of Nike customized cleats that he would wear in his on-field drills at Lucas Oil Stadium. The cleats pay tribute to Ohio State and the city of St. Louis, Missouri, where Elliott grew up. 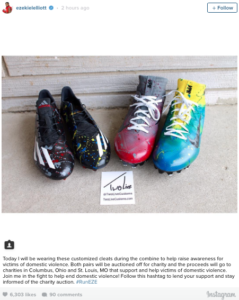 On Friday, Elliott shared another picture of the cleats on Instagram. Beside the picture, he wrote, “today I will be wearing these customized cleats during the combine to help raise awareness for victims of domestic violence.”

After the Combine, proceeds from an auction of the shoes will go to charities in Columbus, Ohio and St. Louis to provide financial assistance for victims.

The 2015 Big Ten Offensive Player and Running Back of the Year last year had 1,821 rushing yards and 23 touchdowns in his junior season. In his three-year career, Elliott rushed for 3,961 yards with 43 touchdowns. In his sophomore year, he helped lead the Buckeyes to the inaugural College Football Playoff National Championship. For all the attention his play received, Elliott also created headlines off the field.

There was the post-game criticism of the Ohio State coaches after a 17-14 loss to Michigan State on Nov. 21. Elliott had 12 rushes for 33 yards, ending a 15-game streak of 100 or more rushing yards. “I deserve more than (12) carries,” he said after the game. “I can’t speak for the playcaller. I don’t know what was going on.” He apologized on social media for creating a controversy, but not for his remarks.

Hargreaves, a Florida cornerback, is encouraging fans to donate to wounded military personnel and their families.

Hargreaves, who intercepted four passes last season, recently began a campaign through the website Pledge It. “Pledge a donation toward every inch I leap in the vertical jump to support our service men and women,” his page reads.

All donations will go to Stand By the Wounded, a non-profit organization that assists in the needs of military personnel across the country. Its mission is “this is a hand up, not a handout.”

Hargreaves is scheduled to be part of the on-field workouts on Monday. As of Saturday afternoon, there were 44 pledges on the website for an average of $73.11 per inch and an estimated total of $2,559. The target amount is $3,500.

Hargreaves said the Combine seemed like a natural occasion to promote a cause.

“Everybody watches the Combine,” he said. “There’s no better platform.”

Hargreaves trained for the Combine at EXOS, an athlete performance center in Pensacola, Florida where the idea began. Working out alongside wounded service men and women, Hargreaves noticed their grit and determination.

“All that stuff they go through, there’s nothing that can prepare you for that,” he said. “This is the least I can do for them, you know, set up a little fundraiser for them and compete for them.”

With the Combine growing in popularity every year, Elliott and Hargreaves may have opened the door to a new possibility, using this week as a way to give back.