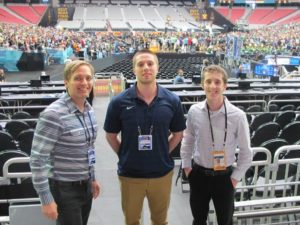 Mark Alewine, a graduate student in the Department of Journalism and Public Relations, and Colton Bennett, an undergraduate at IUPUI, will cover the men’s Final Four at University of Phoenix Stadium in Glendale, Arizona for the Sports Capital Journalism Program website. Tyler Fenwick, a junior at IUPUI, was selected by the NCAA to contribute to its social media content.

Rebecca Harris and Jessica Hunt, students in the M.A. program in Sports Journalism, will cover the women’s Final Four at American Airlines Center in Dallas for the website NCAA.com and the program’s website.

The students will be supervised by Malcolm Moran, the program’s director who will attend his 37th Final Four, and Pamela Laucella, the academic director.

“Our neighbors at the NCAA have created remarkable opportunities that have challenged the reporting ability, creativity and stamina of our students,” Moran said. “By the end of each experience, IUPUI students know they can compete with experienced professionals from across the country, because they just did. We are always grateful for this experience.” 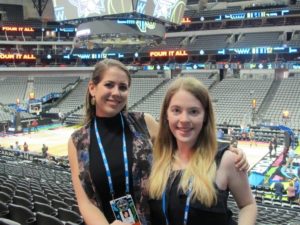 The Sports Capital Journalism Program, in association with the United States Basketball Writers Association, also organized “Full Court Press,” a seminar and scholarship competition for college and high school students to take place on Friday at the men’s Final Four.