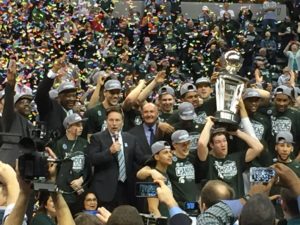 INDIANAPOLIS — Michigan State senior Denzel Valentine stood face to face with teammate Bryn Forbes with 8.6 seconds remaining in the Big Ten Tournament final and the Spartans leading Purdue, 64-62. The Big Ten Player of the Year and first team All-Big Ten selection knew the game was now potentially out of his hands. Putting both palms on Forbes’ shoulders, Valentine smiled, and uttered four simple words that he knew would focus his childhood friend before he attempted two of the biggest free throws of his life.

“Do it for Jack,” said Valentine.

Forbes approached the free throw line, gazing up at the rim confidently. He dribbled the ball once, then twice, and proceeded to swish the shot. After repeating the process again, with the same result, Forbes hadn’t just made his newborn baby proud, but he had also iced the Big Ten tournament championship game for the Spartans.

Behind Valentine’s near triple-double of 15 points, 10 rebounds and nine assists and the collective contributions of a Spartan team that saw 10 of 11 players score, Michigan State defeated Purdue 66-62, for its fifth Big Ten tournament title.

Sunday’s victory allowed Michigan State to pull off a rare double — the Big Ten football and basketball tourney titles — in venues less than a mile apart. The Spartans duplicated a feat accomplished in the 2013 football championship and 2014 basketball tournament. Michigan State coach Tom Izzo won his only national championship in Indianapolis in 2000, brought his Spartans here for the 2010 and 2015 Final Fours and won a 2009 regional at Lucas Oil Stadium.

“This is a great city,” said Izzo, who picked up his 100th career win in the month of March. 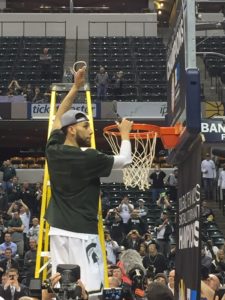 Michigan State’s Denzel Valentine cuts down the net after the Spartans won the Big Ten tournament title and he was named the tournament’s Most Outstanding Player.

Michigan State (29-5) wound up with the No. 2 seed in the Midwest Region and will open NCAA tourney play Friday against 15th-seeded Middle Tennessee State in St. Louis. Purdue (26-8) was seeded fifth in the Midwest region and will face Little Rock on Thursday at Denver.

Learning that his team wasn’t going to be a No.1 seed in the NCAA tournament didn’t bother Valentine, who isn’t concerned with factors that are out of his hands.

“We can control what we can control,” said Valentine, who was selected as the Most Outstanding Player of the tournament. “We’ve got a tournament championship. And it’s up to the committee on who they seed so we have no control over that. We’re just going to come out and play Michigan State basketball in the tournament.”

Coming into Sunday’s matchup with Purdue, Michigan State held the status of being No.1 in the country in rebounding margin at plus-11.7 and second in field-goal percentage defense at 37.7. By the end of the Big Ten Championship game, Michigan State had put on a display of its brilliance in both categories.

The Spartans held Purdue to just 38.2 percent shooting, while outrebounding the Boilermakers 41-31, all of which left Purdue coach Matt Painter frustrated that his team was unable to do more.

“They throw a lot of bodies at you, and they keep coming,” said Painter. “We had to do a better job of getting to them a little bit.”

Purdue, down 36-26 at halftime, came out energized for the final 20 minutes. By the time A.J. Hammons’ driving attempt to the basket was rewarded with a dunk, the Boilermakers had cut the deficit down to just two points with 7:47 left in the game.

“I thought our guys really put forth a great effort in the second half,” Painter sad. “We dug ourselves a hole. And normally it’s the flip of the possessions where we outrebound people and then turn the ball over. I thought we did a good job of taking care of the basketball. They outrebounded us by 10 on the glass.” 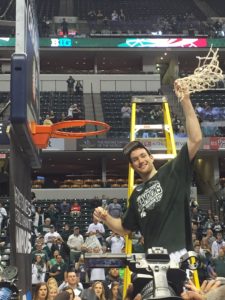 With 19.5 seconds left in the contest and Michigan State leading 64-62, senior Matt Costello missed the front end of a one and one. Running back on defense, he soon found himself matched up with Purdue point guard Johnny Hill. Hill, recognizing the mismatch, drove to the basket to attempt the game-tying layup. In maybe his finest moment in a Spartan uniform, Costello stayed right with Hill and blocked his shot attempt.

“I had to make up for that missed free throw somehow,” said Costello, whose total of 145 blocks is a career record for Michigan State. “And it worked out that it was a block.”

That moment led to a Valentine rebound, two Forbes free-throws, and the Big Ten tournament championship.

“This was the battle cry of the seniors,” Izzo said. “…. And I think they worked for it. They deserved it. They earned it. They got it the old-fashioned way, and that’s what I love about them.”

Over the course of the game, Michigan State saw a couple of unheralded faces come through when they were needed the most. No one more than 6-7 redshirt senior forward Colby Wollenman.

Wollenman, a pre-med student from Big Horn, Wyoming, currently in the process of applying to some of America’s top medical schools, had originally opted to attend Michigan State because of an academic scholarship.

“In practice, he’s on the scout team,” said Valentine. “… I mean, he has nothing to be scared about. He’s going up against the best athletes every day in practice. So Colby is a big time player.”

When forward Marvin Clark Jr. picked up his fifth foul with 6:13 left in the second half, Izzo turned to Wollenman, who had averaged 1.1 points and 5.8 minutes this season. In seven minutes during the first half, Wollenman scored two points with three rebounds.

After he replaced Clark, Wollenman threw a nice pass to junior guard Eron Harris, who proceeded to knock down a three-pointer. On his next trip down the floor, Wollenman’s putback dunk, following a missed three-point attempt from Costello, gave Michigan State a 62-57 lead. When Purdue called timeout seven seconds later, with 5:04 to go, Wollenman’s path to the Spartan bench was blocked by celebrating teammates as the Michigan State fans roared.

Wollenman finished with four points, five rebounds and an assist in 12 minutes, and according to his coach, a memorable tale for the future.

“Colby has been to four out of five finals,” Izzo said. “Think about that. So when he’s operating on somebody someday, he’s going to have a hell of a story to tell.”

After the game, amidst all the celebration and confetti, Valentine sought out Forbes and grabbed him, emphatically repeating over and over what he truly believed minutes earlier.

“I told you, you would make them,” Valentine said. “I told you.”