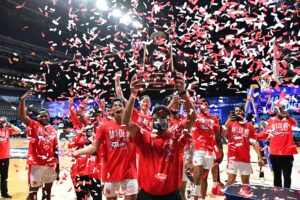 INDIANAPOLIS — When Kelvin Sampson first arrived on the University of Houston’s campus as the new men’s basketball coach in 2014, he received a large out-of-state package.

Inside the box was a ladder and a letter from one of his best friends, University of Oklahoma Athletic Director Joe Castiglione.

Castiglione wrote to Sampson that he hoped he got to use that ladder a lot as the head coach of the Cougars, and to always appreciate the symbolism behind it.

Pumping a fist full of nylon towards the crowd on Monday night at Lucas Oil Stadium, Sampson was reminded of that gift from seven years ago, as the No. 2 Cougars advanced to their first Final Four in 37 years by defeating No. 12 Oregon State 67-61 in the Midwest Regional championship.

“What that means is every ladder represents a step along the way,” Sampson said. “Our academic people who do such a great of putting our kids in position to graduate; our compliance people; our athletic director and his administration; our president; Tilman Fertitta, who has supported us financially and helped us gain footing with the rest of the conference; our trainers, our strength coaches, our assistant coaches, managers, players — everybody’s part of the ladder.

“We’re all kind of the same,” Sampson said. “We’re just part of this program trying to build it.”

Sampson became the 14th coach to lead two schools to the Final Four, 19 years after his Oklahoma Sooners lost a national semifinal. He is the fourth coach that was active this season to achieve that feat, joining Bob Huggins of West Virginia and Cincinnati, and Roy Williams of North Carolina and Kansas, and recently retired Lon Kruger of Oklahoma and Florida.

The climb back to national prominence has been a long one for Houston.

Guy Lewis led the program to the Final Four in 1967 and 1968, before his Phi Slama Jama teams captivated the nation with their dazzling dunks on the national stage from 1982 to 1984.

The Cougars sustained some success after Clyde Drexler and Hakeem Olajuwon moved on to the NBA and Lewis retired in 1986, but could never make it out of the second round of the NCAA tournament again before the turn of the century.

The program then bottomed out, not making it to March Madness from 1993 to 2009.

Coach James Dickey got the Cougars back into the bracket in 2010, but would later leave following the 2013-14 season for private family matters.

Houston then took a chance on Sampson, who was effectively banned from the NCAA, following Dickey’s resignation. Sampson was eligible to return to the college ranks in 2014 after fulfilling a five-year show penalty for sanctions against him when he was the head coach at Indiana University in 2008.

Sampson saw the program being “built brick by brick,” and knew it was a matter of time before something special could happen.

“Then we came back the following year, and COVID hit us, but that team was playing its best basketball at the end of the year.”

Now the Cougars have a shot at playing in their third national title game in school history and the first since 1984.

Sampson coached in his 1,000th career game on Monday in the Elite Eight, but that was just another step on the ladder. He’ll only be satisfied if the Cougars climb two more in 2021.