Postcard From the Final Four: The 3.3 Seconds I’ll Never Forget

As I type this first sentence, it is 2:53 a.m. Sunday morning. The rest of the world seems to have fallen asleep, but I am kept up past my usual bedtime for reasons I will never forget. Normally, when someone says they will never forget something, it is usually a menial night out or something of that nature, because there’s nothing more human than good old-fashioned hyperbole. 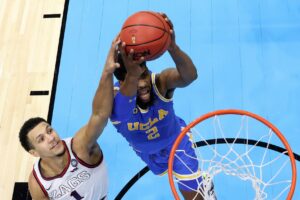 . I will never forget Gonzaga’s Corey Kispert inbounding the ball with 3.3 seconds to play in the national semifinal, and I will never forget Jalen Suggs’ shot going up as I believed this was another run-of-the-mill half-court shot, and that the second overtime would be beginning soon.

This all happened in seconds, and by the time that last thought crossed my mind, the ball had gone in the basket, Jalen Suggs was on a table next to the sideline, and only the slightest bit of journalistic integrity kept me from jumping up and down.

(I did raise my arms in a moment of pure ecstasy. Sorry.)

It is a moment that will truly be ingrained in my memory, and one that I do not think I will forget any time soon.

As Jalen Suggs said in his postgame press conference, this is probably the greatest sports moment I will ever be a part of. Sure, I did not do anything on the court, but just being in the building and getting to experience one of the great moments in Final Four history is mind bending-enough to make me wonder if any feeling I will ever have can be as good as that feeling of the ball banking in.

It’s funny, I actually prepared the least for UCLA. I prepared heavily for Houston-Baylor, as I figured that would be tightly contested throughout. I figured the second game would be a blowout, considering Gonzaga had spent the better part of four months beating the snot out of every team that crossed its path, with the exception of one game against West Virginia. Sure, I had watched UCLA games, and saw the Bruins had held their own against teams like Michigan and Alabama, considered to be two of the five best teams in the country. But if the line was Gonzaga by 20, I would have pounded the over.

As my luck would have it (and I should have expected this, really) the Houston Cougars got eviscerated by Baylor, and the largest lead in the Gonzaga-UCLA game was seven points. Of course not only Johnny Juzang went off, as he did throughout the tournament, but Tyger Campbell, who went to prep school less than 35 minutes from my hometown, had 17 points and Jaime Jaquez Jr had 19 points as well.

On Saturday afternoon, Malcolm Moran, the director of the Sports Capital Journalism Program, asked me to write a story about a Gonzaga player of my choosing, saying I might choose Kispert or Suggs. At first, I was going to go with an approach of writing about Kispert, Suggs and Drew Timme, because those three comprise Gonzaga’s balanced approach. However, as I kept writing, I pivoted into an article about Suggs, with a cursory paragraph in there about how good Kispert and Timme were before focusing the rest of the article on Suggs. Malcolm explained that if Gonzaga won and Suggs played a contributing factor in that, we could adjust the story and make Suggs’ game against UCLA the main story.

What neither of us could have foreseen was Suggs being the FACTOR that won the game, in a literal sense. For about five minutes after the buzzer sounded at 11:10 p.m., my brain felt like it was simultaneously moving in slow motion while also moving at a million miles an hour. What am I gonna write about now? I can’t write about Suggs, since that will be the topic du jour of the night for NCAA.com, so I have to pivot.

In the press conference, I ask Mark Few about junior guard Joel Ayayi and his first half performance. Ayayi had scored 16 of his 22 points in the first half, but that is not what I wanted to write about. If that’s what I need to write I am going to do my job.

Few gave me a quote that I am not sure anyone is going to use, because when Malcolm let me know we were able to repurpose the Suggs story, I immediately dropped that façade and went about writing what I really wanted to write about: The Shot.

For a generation of college basketball fans, this is going to be known as The Shot. I had the privilege of being in the building for one of college basketball’s greatest moments, and all I had to do was sit there and watch. I sent my story at 12:42 a.m. and then got to go home, and after writing may be able to fall asleep in my own bed.

May being the operative word here. Hard to fall asleep when you have butterflies in your stomach.

I cannot thank Malcolm and Sports Capital Journalism enough for their belief in me, and the amount of support they have in me. It’s a freeing feeling knowing that someone like Malcolm is in your corner, letting you know if you did a good job while also correcting the mistakes I made (and given the rate of my writing, I am bound to make a few).

It is now 3:17 a.m., nearly three hours after my bedtime. I do not know when I will fall asleep. All I know is, I witnessed sports history. Where else would I have been able to witness that at age 23, except for the Sports Capital Journalism program?