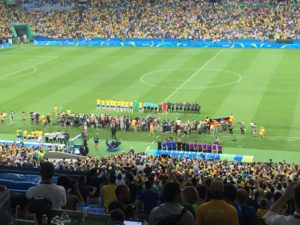 Brazil and Germany line up on the field ahead of their gold-medal match on Aug. 20, 2016 at the Maracanã. (Photo by Frank Gogola)

So there I found myself inside the famed Maracanã alongside Brazilian soccer fans, caught up inside their moment of glory, redemption and pure elation.

Brazil has just beaten Germany to win its first-ever Olympic gold medal with an ending you couldn’t script any better. After the World Cup humiliation, the constant dissection of Brazil’s numerous problems with hosting the Olympics and fans turning on Neymar, the party-like scene was unlike anything I’ve ever witnessed at a U.S. sporting event.

The tension was already high when I arrived at the Maracanã on the media shuttle at 4:37 p.m., ahead of the 5:30 p.m. start time. Fans and military police were everywhere you looked.

I eventually found a seat between a Japanese reporter and a Brazilian reporter as the home team took the pitch for warmups. The press area became standing-room only before the match started. This was the game to be at.

Brazil needed to score first or memories of the humiliating 7-1 semifinal loss to Germany in the 2014 World Cup at Belo Horizonte would start dancing in fans heads. That’s what the animated Brazilian reporter was saying as he kept swiping his hand to the left – the direction Brazil was shooting in the first half – and yelling at them to get on the attack.

None of the players on either team played in the World Cup because the Olympics is for under-23 players, with three overage players allowed. Neymar, who missed the 2014 game after a back injury in the quarterfinals, slotted home the first goal of the game on a free kick in the 27th minute. 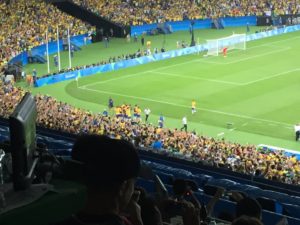 The stadium erupted. Instant insanity. The Brazilian reporter to my right bolted up out of his chair and was jumping up and down and screaming as he ran behind the chairs and into the aisle.

But, one goal wasn’t going to win this, right? Germany hit the crossbar three times in the first half, and you could feel the crowd’s collective heartbeat stop each time.

And then, stunned silence. German captain Maximilian Meyer found the equalizer in the 59th minute on a one-timer. Confused stares and a feeling of, ‘Oh no, this can’t be happening,’ flooded the stadium. This was their shot at redemption, at proving themselves on the world stage. The only other choice was a lingering depression and agony.

There was so much negativity spoken and written about Rio heading into the Olympic Games: political turmoil, recession, polluted water and threat of the Zika virus. At this game, though, they could temporarily escape from those problems.

When neither team could put away the game, penalty kicks would be the decider. As I joked on Twitter — but may really be true — hosting the Olympics may have been or not have been worth the cost to the Brazilians based solely on how this one game, and the complete guessing game that is penalty kicks, turned out.

Four goals from each side, with Neymar still to go. It was a dangerous proposition to give him the potential glory kick should he never get the opportunity.

After a save on Germany’s fifth kick, the crowd went crazy, screaming and jumping up and down. It was Neymar, the stutter-step walkup and the ball hitting the back of the net. It was reminiscent of Sidney Crosby’s golden OT winner for Canada against the United States at the Vancouver 2010 Winter Olympics.

Yet it came weeks after Brazilians questioned Neymar’s commitment to the Olympics. Pictures of fans showed them crossing “Neymar Jr.” off the back of their No. 10 jerseys in favor of “Marta,” the No. 10 on the women’s national team who’s considered one of the greatest women’s players ever.

But, delivering Brazil its first gold medal changed that negative opinion, erased any doubts. He was cheered in person and on video the following days. 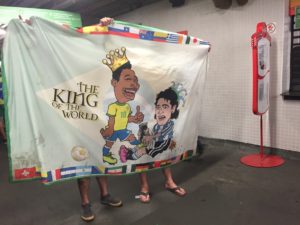 Two Brazil fans were running around with this flag after the game, so I snapped this pic. (Photo by Frank Gogola)

Neymar collapsed to the ground in tears as the team mobbed him. The crowd roared with a profound passion unlike anything I’ve ever seen at a U.S. sporting event.

The dancing, singing and flag waving continued through a 30-minute wait for the medal ceremony. It didn’t look or sound like any Brazil fan would be leaving the stadium before then. It was as much their moment of glory as it was the players’ moment.

This was an entire country united together. A people who suffered through two years of torment after the humiliation in 2014. A people who’ve heard from the outside world that Brazil shouldn’t be hosting the Olympics because of government turmoil, the Zika virus and more.

It was all wiped away in a ray of gold. A nation was healed – at least temporarily. All it took was one magical day at the Maracanã.